If you go down to the woods today...

Waking up last Saturday morning to a cloudless blue sky we immediately decided we had to go out for the day. Living near the Forest of Dean and having not been there to visit for a couple of months we quickly prepared a picnic and all jumped in the car.

We headed to Beechenhurst Lodge as it has toilets (A must with a three and five year old!), a play area and lots of walks and woodlands to explore as well as a cafe serving ice-creams. Once we arrived we set up our picnic blanket and had a picnic in the sun, even Little 3 had his dinner alfresco for the first time since we started weaning followed by a quick feed while the girls explored.

Then we decided to go for our stroll before the girls had used all their energy running around the picnic blanket! We started walking along the Sculpture Trail they have there but it is a little long for the girls at 4.5 miles however there are a couple of short cuts back to the lodge and plenty of other small paths to wander around too. 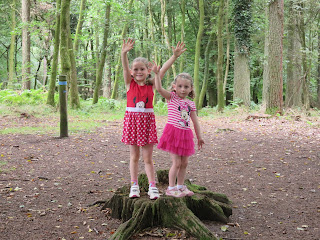 Little 3 was happy in the baby carrier looking out and reaching to touch lots of greenery as we passed as well as gazing in wonder at all the green leaves overhead as we walked along. It was lovely to see him interested and looking about turning his hands over and over in the sunlight while feeling the leaves between his fingers. All his discovering soon wore him out as he nodded off for a snooze while we walked along. 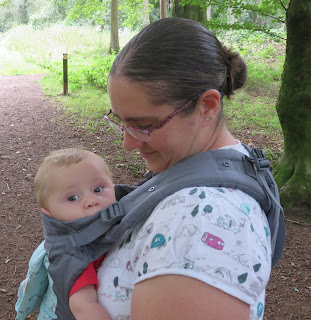 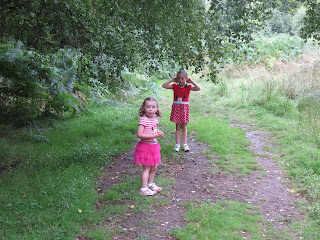 They ran ahead looking into the trees and bushes listening to what they could hear and creeping towards the undergrowth whenever they could hear any rustling. We saw a couple of birds and maybe a mouse or something similar but no pigs however the girls thought it was hilarious to creep quietly and then run screaming 'pigs, we can see the big pigs' as they hid and jumped out at each other from behind the trees. They might have made a couple of other walkers look twice as they ran screaming from the bushes as we trundled slowly along!! 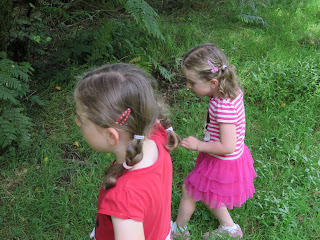 All too soon despite being forced to go before we set off on our walk and having probably only walked about a mile, someone mentioned the toilet! So back we headed down one of the shortcuts to the lodge which had appeared at just the right time.

It was then we headed to the play area and found the pigs! 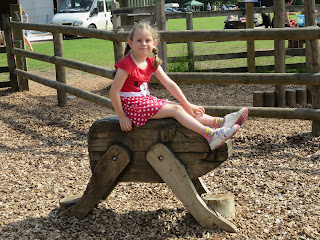 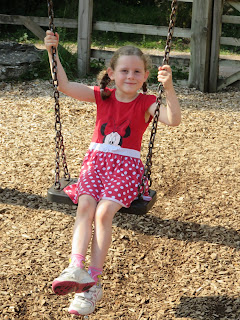 After our play we were all rather warm so we headed to the cafe for lollies and battled with the wasps to eat them all up in the sunshine before heading back to the car for a drink and to demolish a packet of chocolate fingers between us. It was a lovely summers day out and somewhere that we visit at least once or twice a year. 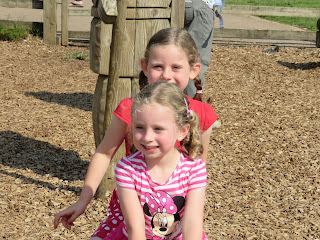 at 8:04 pm
Email ThisBlogThis!Share to TwitterShare to FacebookShare to Pinterest
Labels: daddy, days out, little ones, mummy, walking