Okay I might be a bit bias, okay a lot, but look at him isn't he blooming gorgeous!! Little 3 has reached the ripe ol' age of three months. I have to be honest and say these past 3 months haven't been easy but there has been a massive leap in his development lately which has made life much easier for everyone, he is now much more settled and crying a lot less as well as smiling, chatting and beginning to giggle. 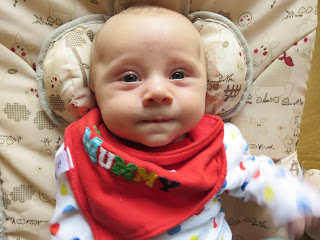 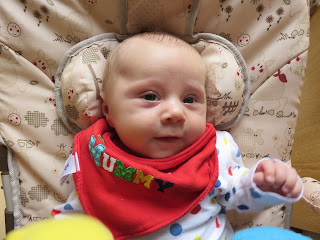 Little 3 seems to have outgrown much of his reflux issues that plagued the early days, he is not on any medication now and is not nearly as sick as he was after feeds, he is much more content and the crying fits are a thing of the past. This has also meant a lot less washing for me which is always a bonus as having 3 children the laundry basket is rarely empty. It is lovely to see him happy and not in pain enjoying that sleepy full tummy feeling. 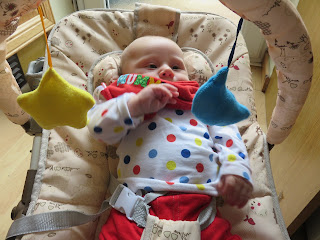 His development has come on leaps and bounds in the last month, he can reach and bat things and has begun to grab toys and attempt to pull them into his mouth. He has found his hands and feet and I like to watch him as he turns his hands over and wiggles his toes looking in awe at his new found playthings. We have had his first giggles this month as well as lots of new sounds too, 'buh buh' is the latest, he loves trying to communicate with his big sisters, smiling and cooing along at them it really is like he is trying to have a conversation with us. 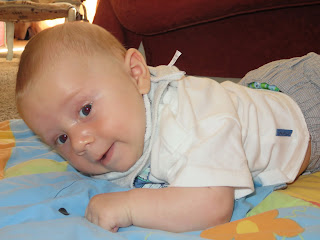 Little 3 likes spending time on the floor under the play gym as well as just having a good kick about. He has been trying very hard at learning to roll, he can now go from his front to back and almost go back the other way but he hasn't quite learnt to move his arm out the way so that he can roll over it and gets stuck on his side with his legs hanging over, but once he is on his tummy he manages to scoot a little way along the floor using his legs and does a very good frog impression lifting his bottom well off the floor, looks like he will be crawling in no time! 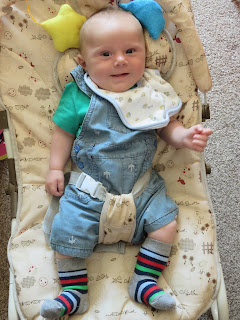 Weighing in at 13lb exactly last week. Little 3 has recently undergone a check up and more tests on his irregular heartbeat so I will post further on that when we get the results, fingers crossed it is what we want to hear.

My gorgeous little boy is changing every day and growing up far to fast, I wonder what he will be up to next month-how time flies.
at 10:57 am
Email ThisBlogThis!Share to TwitterShare to FacebookShare to Pinterest
Labels: baby, ectopic heart, growing up, little 3, time flies