A breath of fresh air

Bank holiday weekend was a bit damp and dreary where we live but the rain held off on the Monday so we decided to get out for a breath of fresh air, it was not too chilly but still quite damp so we headed to one of our favourite haunts knowing there was somewhere inside to go if the heavens opened.

Nanny and Uncle M joined us as we headed to Stratford Park, a short drive away, there is always something to do there. We headed towards the lake with bread in our hands to feed the ducks first but on the way spotted a new toddler play area outside the leisure centre in the middle of the park and with Little 3 fast asleep in the pushchair it only seemed right to let the girls have a play while we popped into the cafe for takeaway coffees and chocolate flapjacks and sat in the warmth of the sun while they let off some steam!

We then set of on our little walk around the lake watching the ducks, coots and swans nesting on the bank. The girls were very interested in several recently felled trees and clambered up and did some 'digging' in the soft rotten stumps. 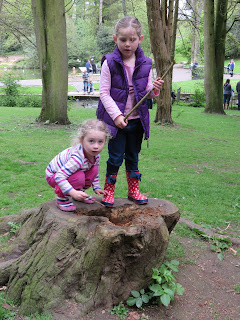 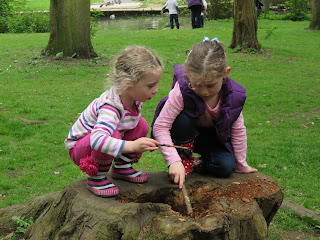 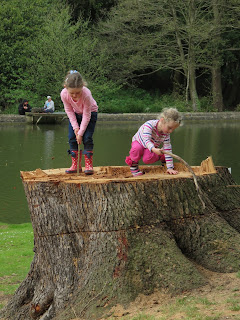 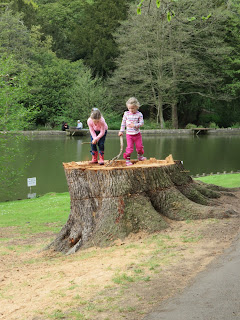 Last year when we had all those storms at the beginning of the year a huge oak tree uprooted and fell in the park, over the stream, it's trunk was several metres across and it must have been hundreds of years old. The top of the tree was swiftly sawn and removed by the park keepers and we had wondered how they were going to remove the trunk from across the stream.

When we saw it on this visit, having not been for a couple of months, we saw it had been turned into a bridge, there was a flat top, some steps either end and a safety rail too, what a good idea. I couldn't go over it with the pushchair as it was steep and uneven at the other side so I met the Little Ones a bit further along where we stopped to feed the ducks. 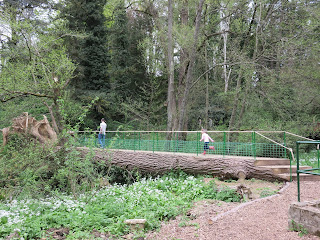 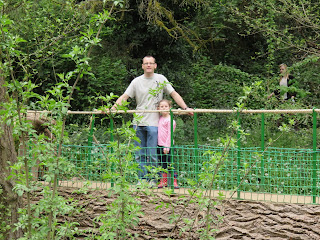 Little 2 wasn't all that interested in feeding the ducks, she ate her bread, but she did acquire this big stick and dragged it the rest of the way around the park (excuse uncle M's legs in the picture). 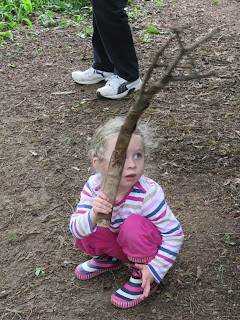 We then had a little fun among the trees and wandered up towards the museum. 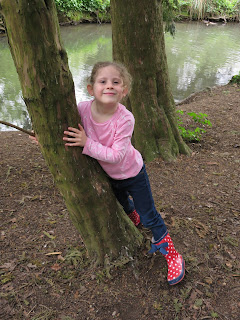 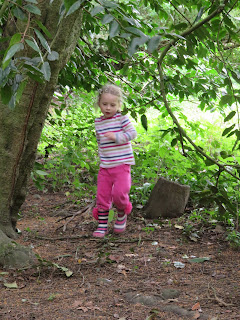 The museum in the park is great as it is free to enter and often has workshops and activities going on in the holidays. It is a small museum but has rooms dedicated to the geology and archaeological finds from the area, things from the olden days with rooms about the household, children and schools, toys and the history of local railways and waterways.

The Little Ones never get bored there as in each room are things for the children, books in the school room, dinosaur puzzles in the geology bit, old toys and games of draughts and hoopla and toy trains in the railway section.

After a quick look at the flowers in the garden it was time to head home. We managed to steer the girls away from the big park on the hill and towards the car as it was looking ominous and everyone was tired but not without noticing a new zip slide and a couple of other additions that were not there the last time we visited, we promised we'd return soon to try them out. 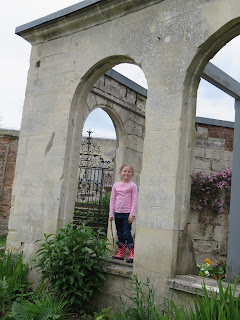 We loaded our tired girls and a stirring hungry baby into the car and headed home for tea.

What did you do last weekend, do you have a favourite place to go time after time?

at 10:21 pm
Email ThisBlogThis!Share to TwitterShare to FacebookShare to Pinterest
Labels: daddy, little ones, mummy, nanny, out and about, uncle