Taking the plunge- switching to cloth nappies at night

We have been using cloth nappies for over a month now and I really love them, they are so soft and comfy against Little 3's skin, he seems very happy and comfortable in them. I love the designs and who can resist patting a big cloth bottom on a newborn.

Up until this point we had only been using cloth in the day, I had been a bit apprehensive about using cloth at night (I was worried about how long they'd last and if they would leak causing disrupted nights). Newborns tend to poo at every feed and need several changes at night so I also didn't fancy changing cloth nappies and having to deal with storing wet nappies in our room at night. I tend to change night nappies on our bed for minimal disturbance of Little 3 and the wet bags etc for storing dirty nappies are set up in the nursery. Because of this we opted to use disposables at night for a few weeks so that I could just throw them away.

We use pocket nappies in the day and they need to be changed every 2-3 hours so they were not going to be the best thing for night so I asked a few questions in the cloth chat rooms and it became clear that there was one really popular choice for a night nappy- the Totsbots bamboozle which is a thick bamboo nappy with microfibre core that requires a separate waterproof wrap over the top, apparently this combination is bombproof and will last 12 hours easily even on a toddler.

I bought a pack of the bamboozle nappies and just needed a couple of the waterproof wraps then we would be good to take the plunge, Tots bots themselves offered to help and sent me their lovely Twinkle stretchy wrap to try.


Little 3 now weighs just over 10lb and is at the smallest end of the weight range for this nappy/wrap, They are size 2 (birth to potty size) and fit around 9-35lb babies (there is a smaller size 1 that fits up to 16lb too). When I first fitted the nappy on the smallest size setting I was a little concerned that Little 3's legs might not quite be chunky enough to allow the nappy to fit snuggly and therefore avoid leaks when wearing it all night. The bamboozle nappy fitted him nicely but there is a little gap at the side of the wrap just inside the hips (in line with the size adjusting poppers, just down to the cut of the wrap and where it has been shortened to the smaller size) and no matter how tightly I did it up I couldn't cover a tiny bit of the nappy underneath. I put him to bed and hoped for the best.

Little 3 has been wearing the bamboozle and wrap combo at night for a week now and I can safely say I needn't have worried. Some nights he has needed a middle of night dirty nappy change and others he has worn the nappy 12 hours straight, we have not had a single leak and the nappy really is soaked through in the morning but it is all safely contained in the wrap. We will definitely continue using these as our night nappy from now on, no more disposables here. 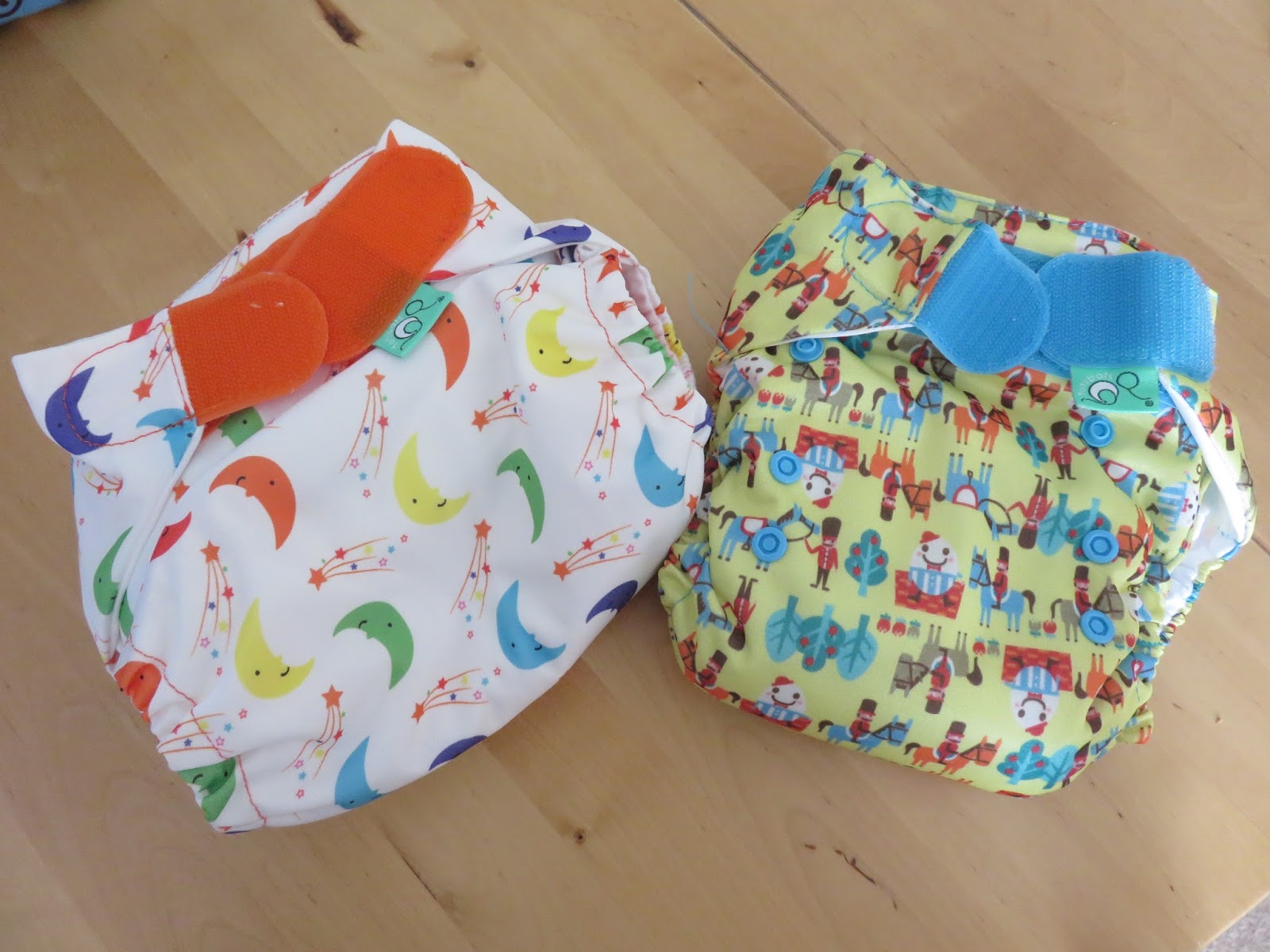 Totsbots were also kind enough to send me another nappy to try the all-in-one Easyfit V4 in Humpty Dumpty pattern. This is just like the pocket nappies we are using but the insert is sewn into the nappy and comes with another one you can popper in to boost absorption. 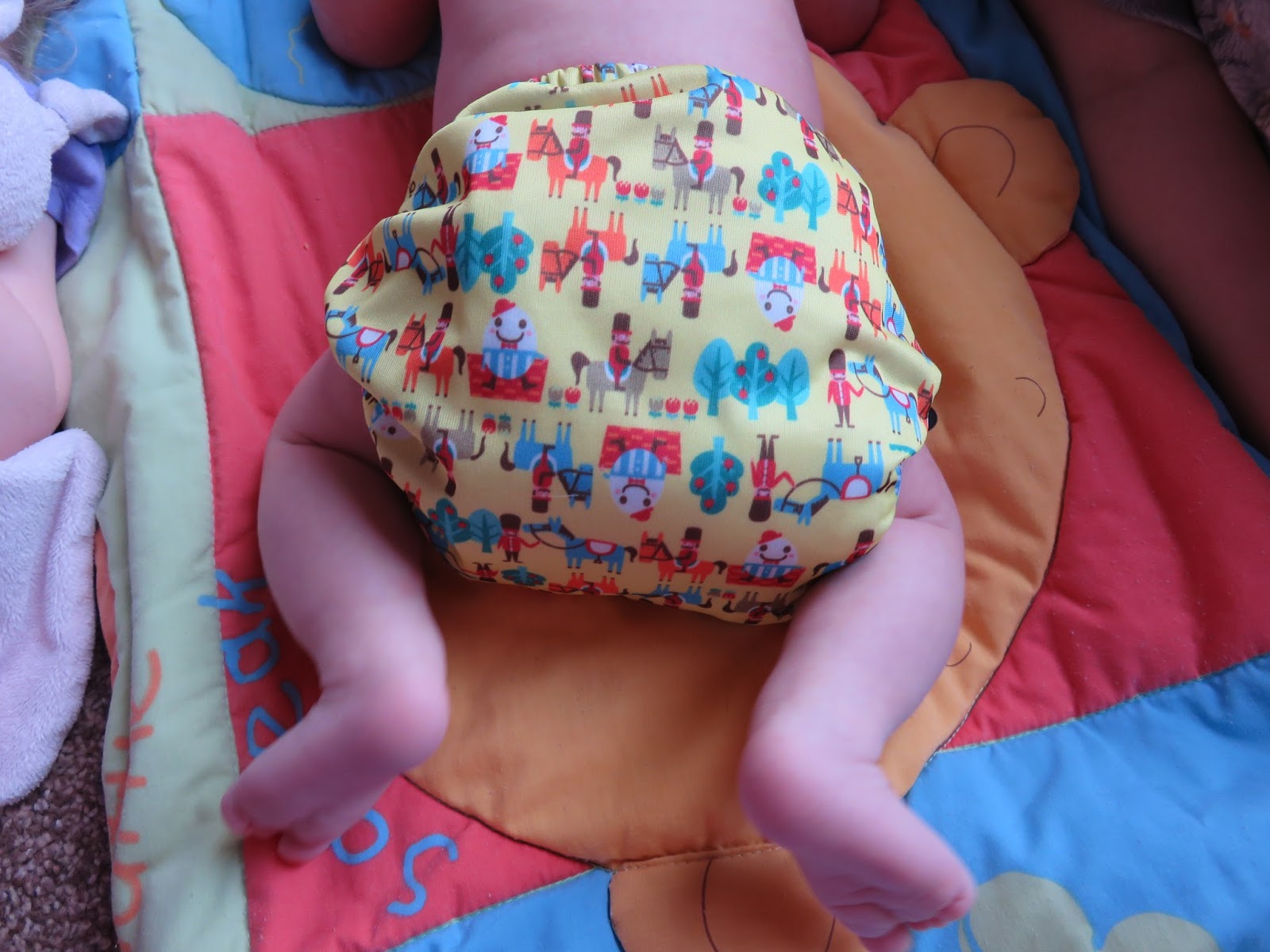 This nappy is great, it is so easy to put on just like a disposable and fits Little 3 lovely, it has  a great design and is soft inside and out. The nappy is quite slim and not as bulky as some of my other nappies but just as absorbent. It washed well and dried super quick too, I might just have to get myself Little 3 a few more Easyfit nappies.

N.B We were kindly sent a Totsbots twinkle stretchy wrap, Easyfit nappy and extra booster in return for their inclusion in this post.