Glorious gloop and a cup of tea

Recently we have had a large drop in our creative play since the weather turned cold and we stopped attending messy play group as it clashed with having to have an early lunch before playgroup. With me feeling tired and getting bigger as my pregnancy progresses I haven't put as much effort into daytime activities with Little 2 while her big sister was at school as I used to. So this week I have tried harder to be creative with her as she really does love it.

This week we have had fun making pretend biscuits with playdough, drawing on a chalk and whiteboard easel she had for Christmas where she loved rubbing her picture off and drawing again, printing pictures off the internet of her favourite characters and colouring them, getting creative making her lunch (faces from the food etc) and today we had a gloop tea party.

I set it all up for her while she was playing and she was trying to guess what we were going to do, putting the little table into the kitchen usually means painting and then she guessed cooking. As soon as we had added some water into the cornflour she got stuck in. The look of glee on her face was all I needed to know she was going to have some fun. 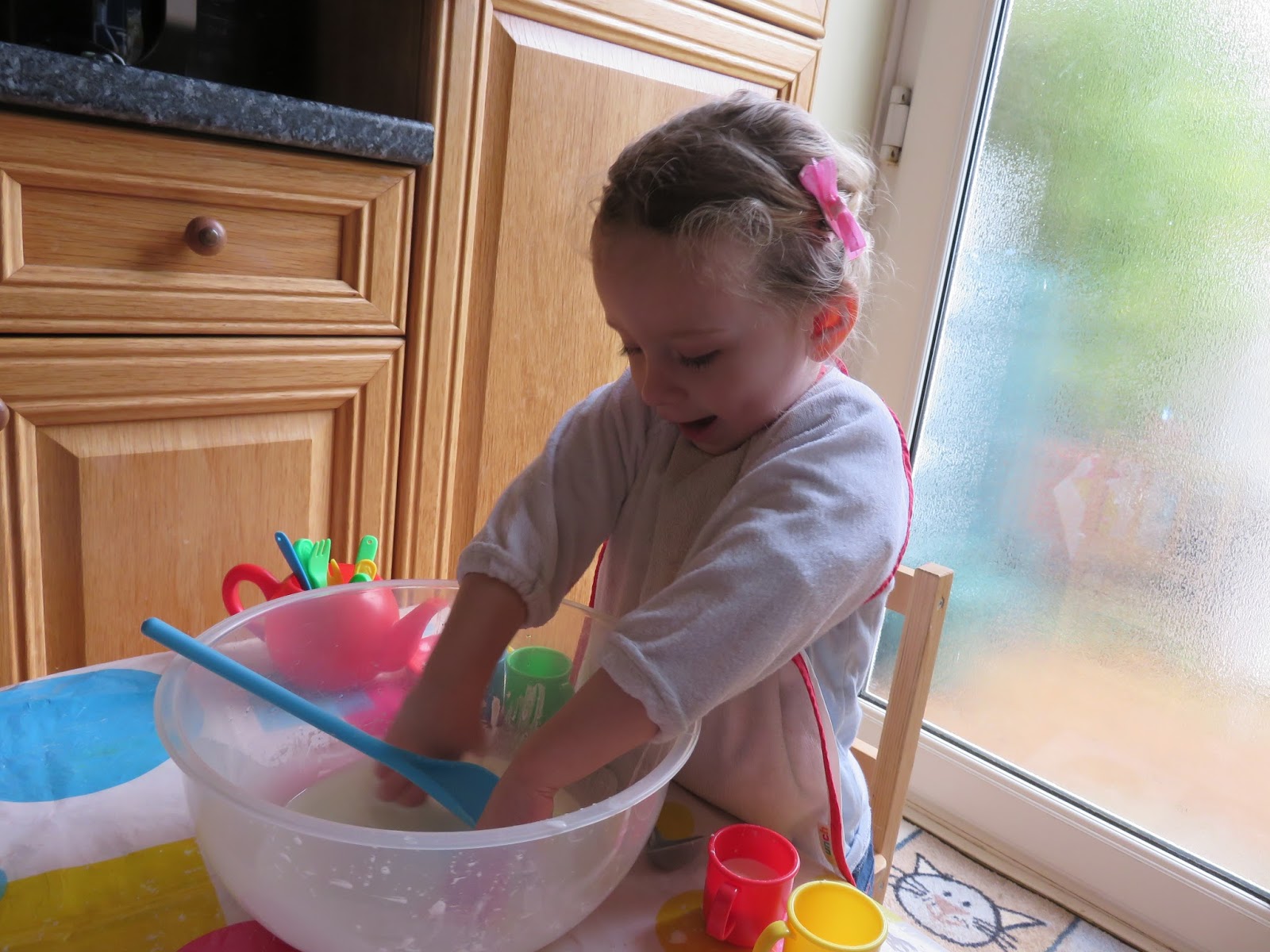 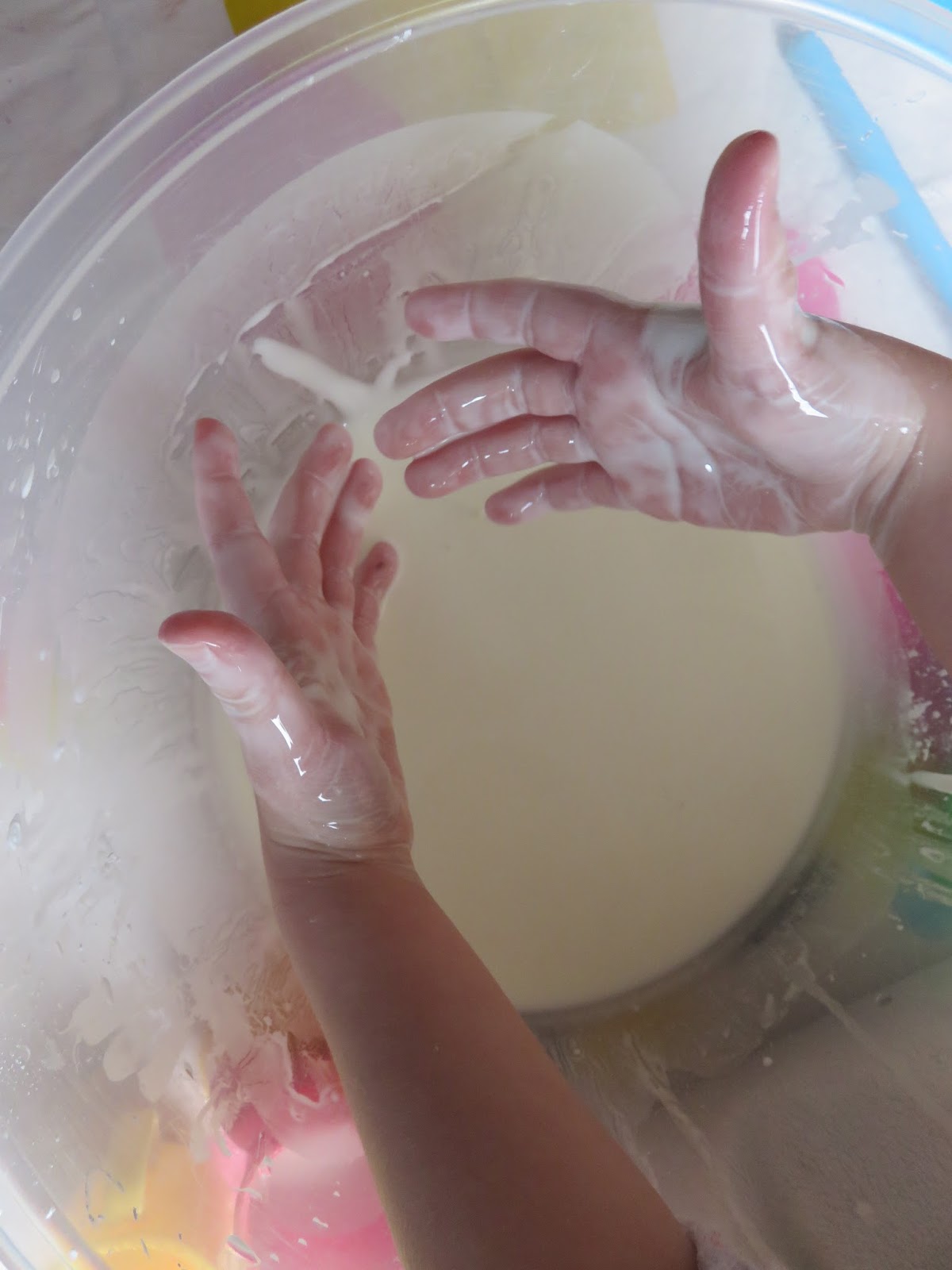 I made it a bit too runny but had used all the cornflour so I couldn't correct it but she didn't mind as she wanted to fill the cups and teapot and pour it out having a pretend tea party. She spent ages carefully filling cups with the spoons and tipping them into the teapot, she was really engrossed in what she was doing. 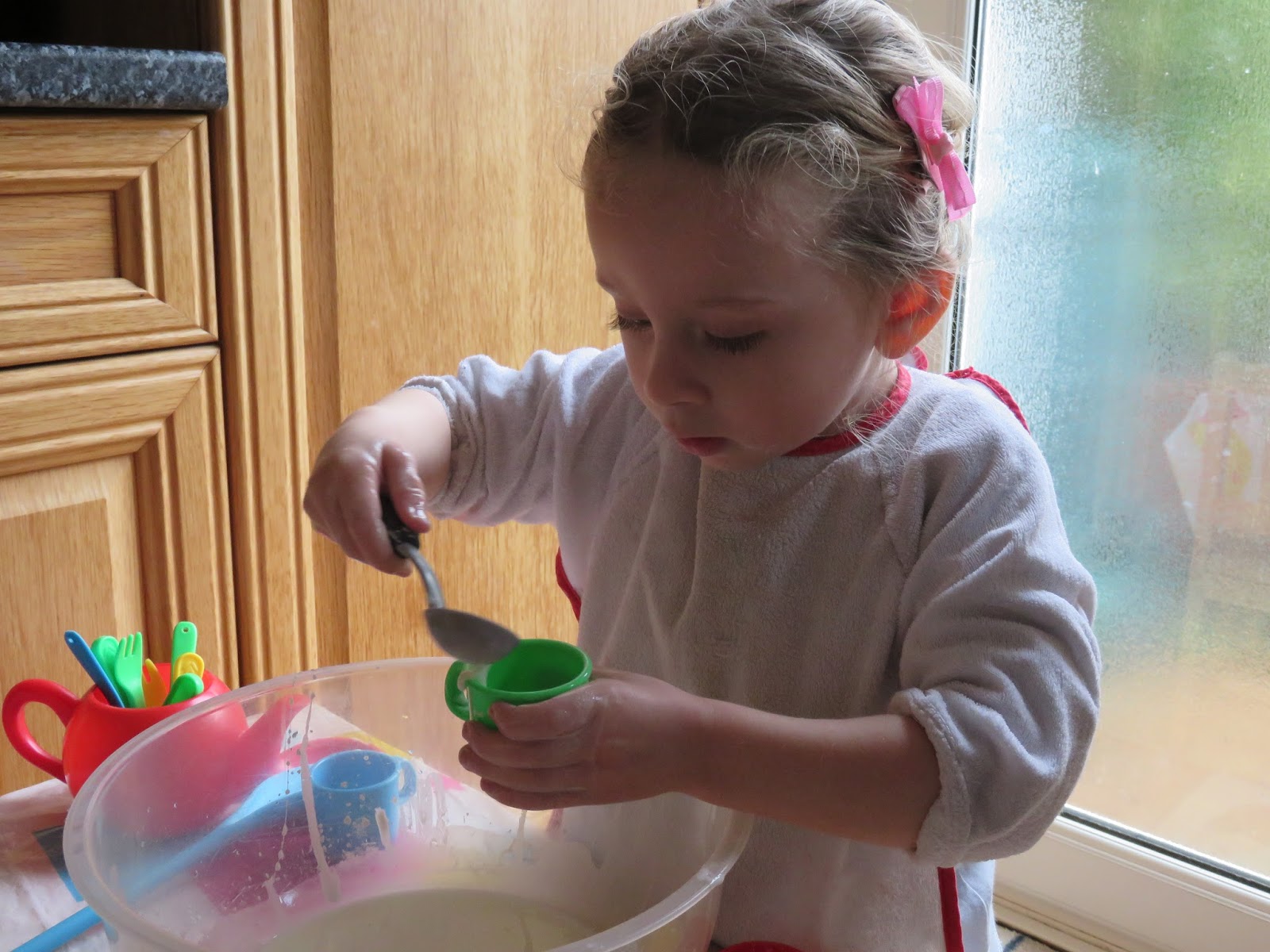 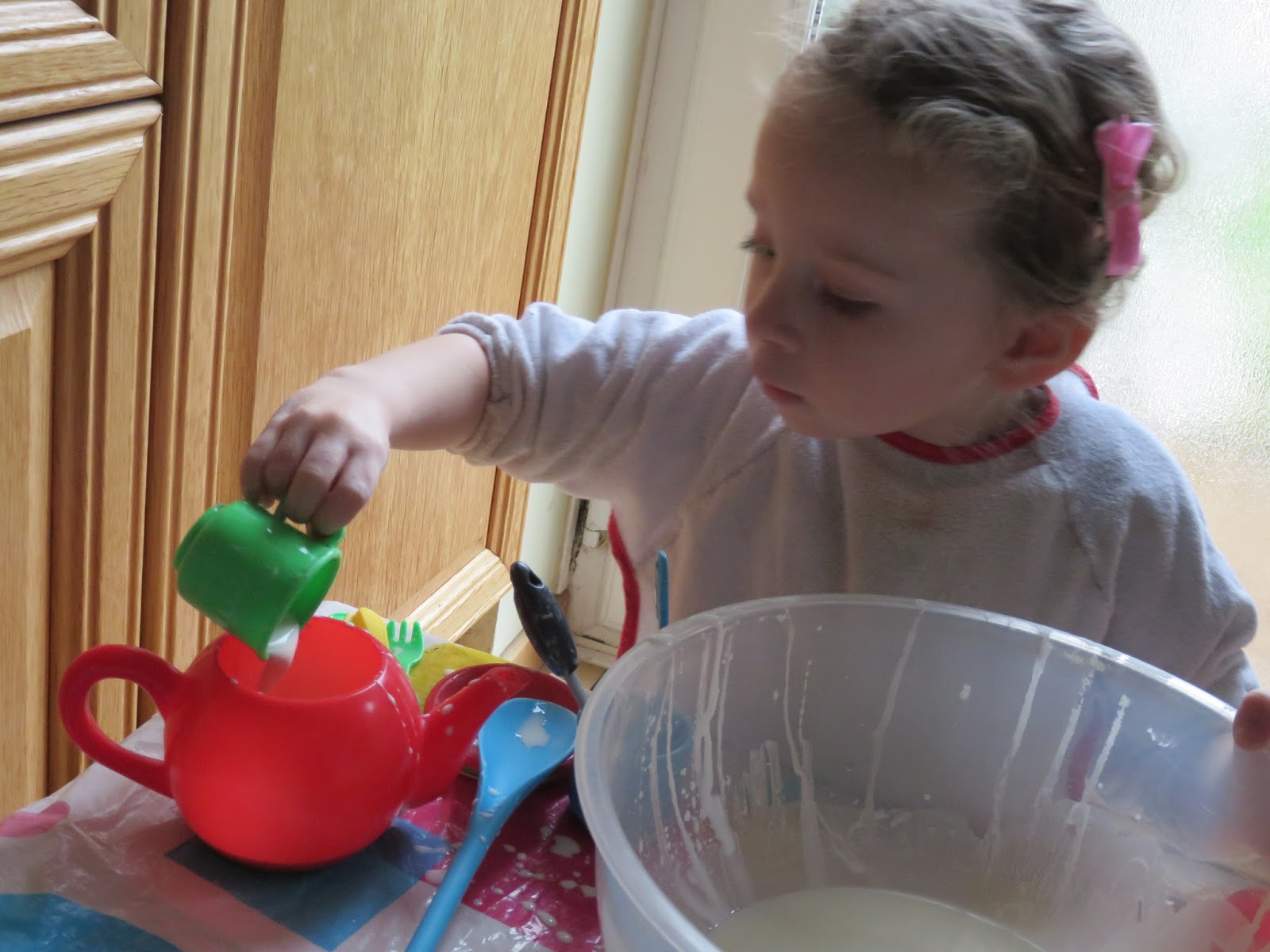 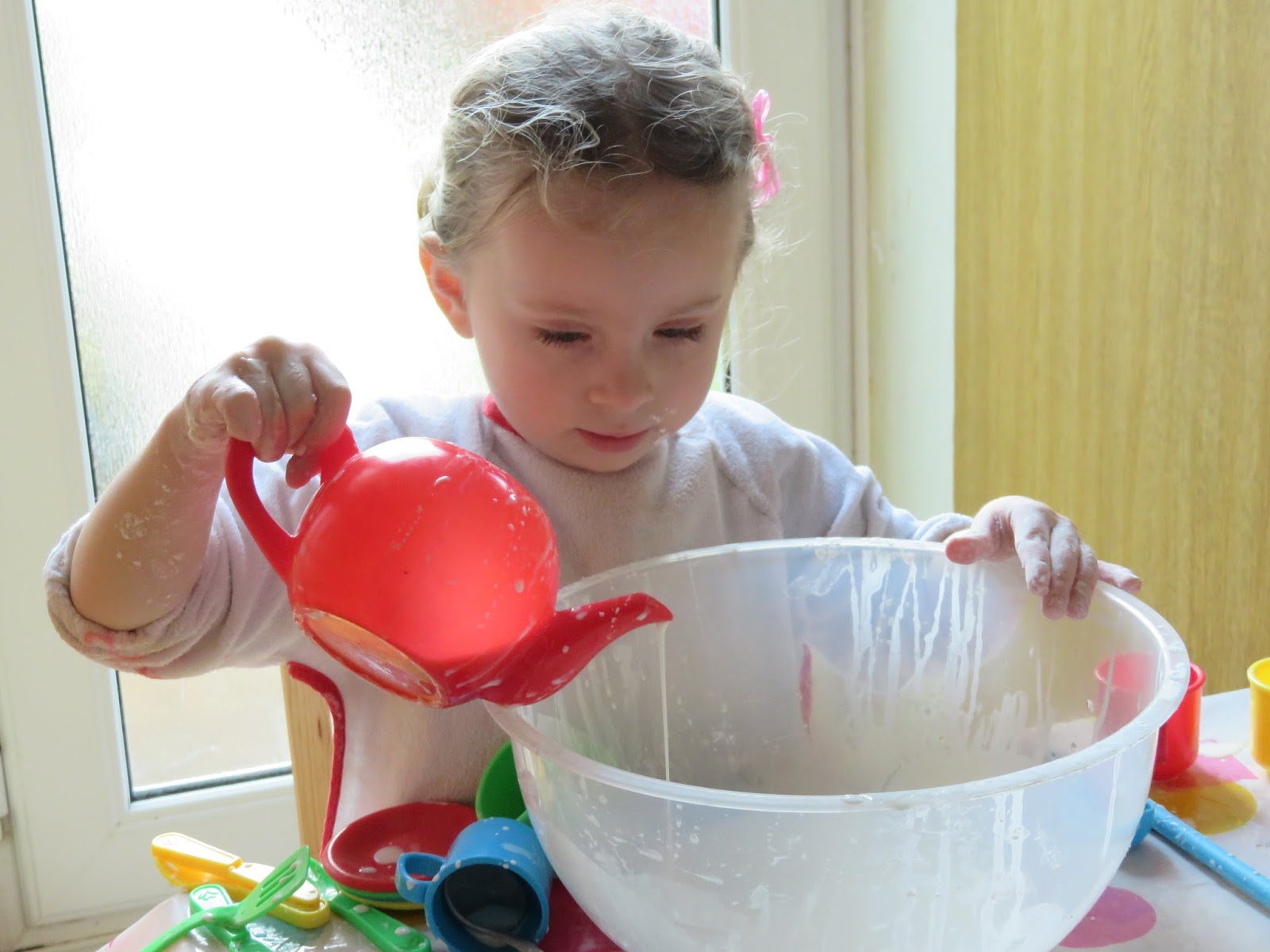 I asked her to tell me what it felt like and she said 'cold' and 'soft'. She loved feeling it run through her fingers and wasn't bothered getting messy. 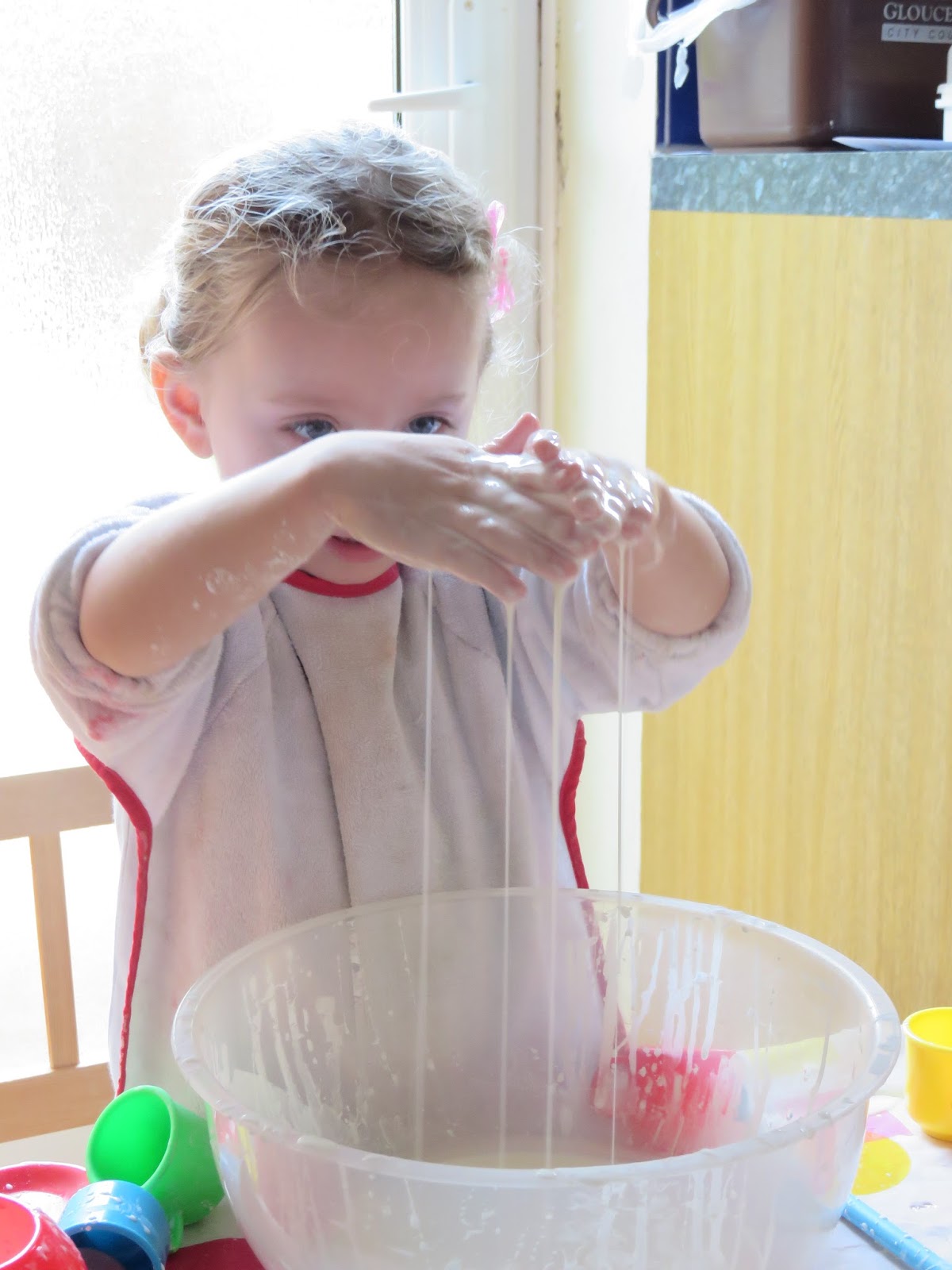 She played for a good 40 minutes and offered me copious cups of tea until I suggested that we clean up as there was rather a lot dripping onto the floor and her skirt! Now for Little 2 cleaning up means washing up, she loves washing up at the moment and always asks to help me wash up the plastic beakers and bits that can't go in the dishwasher each day so after rinsing out the bowl of gloop I let her loose with a bowl of washing up water. 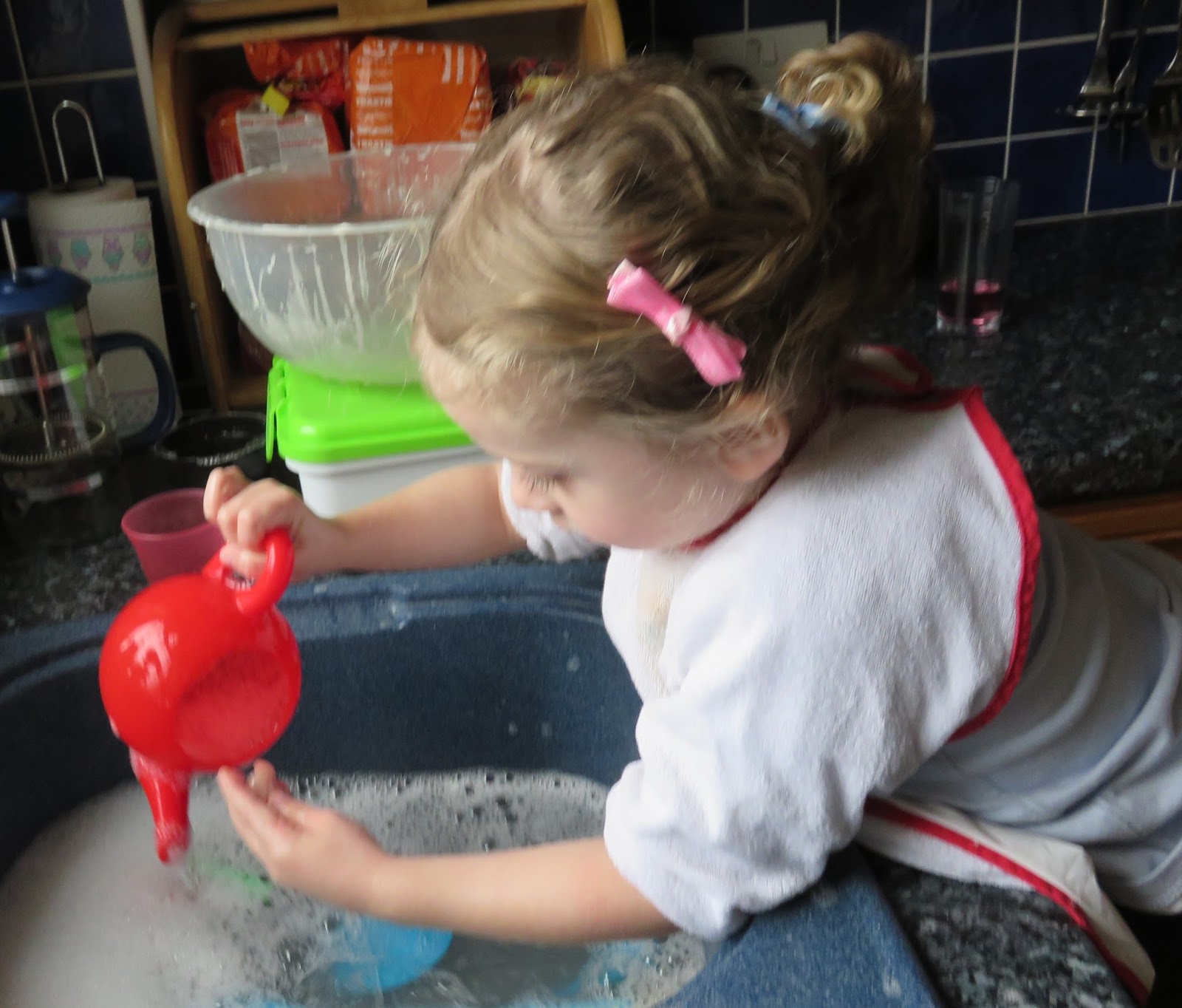 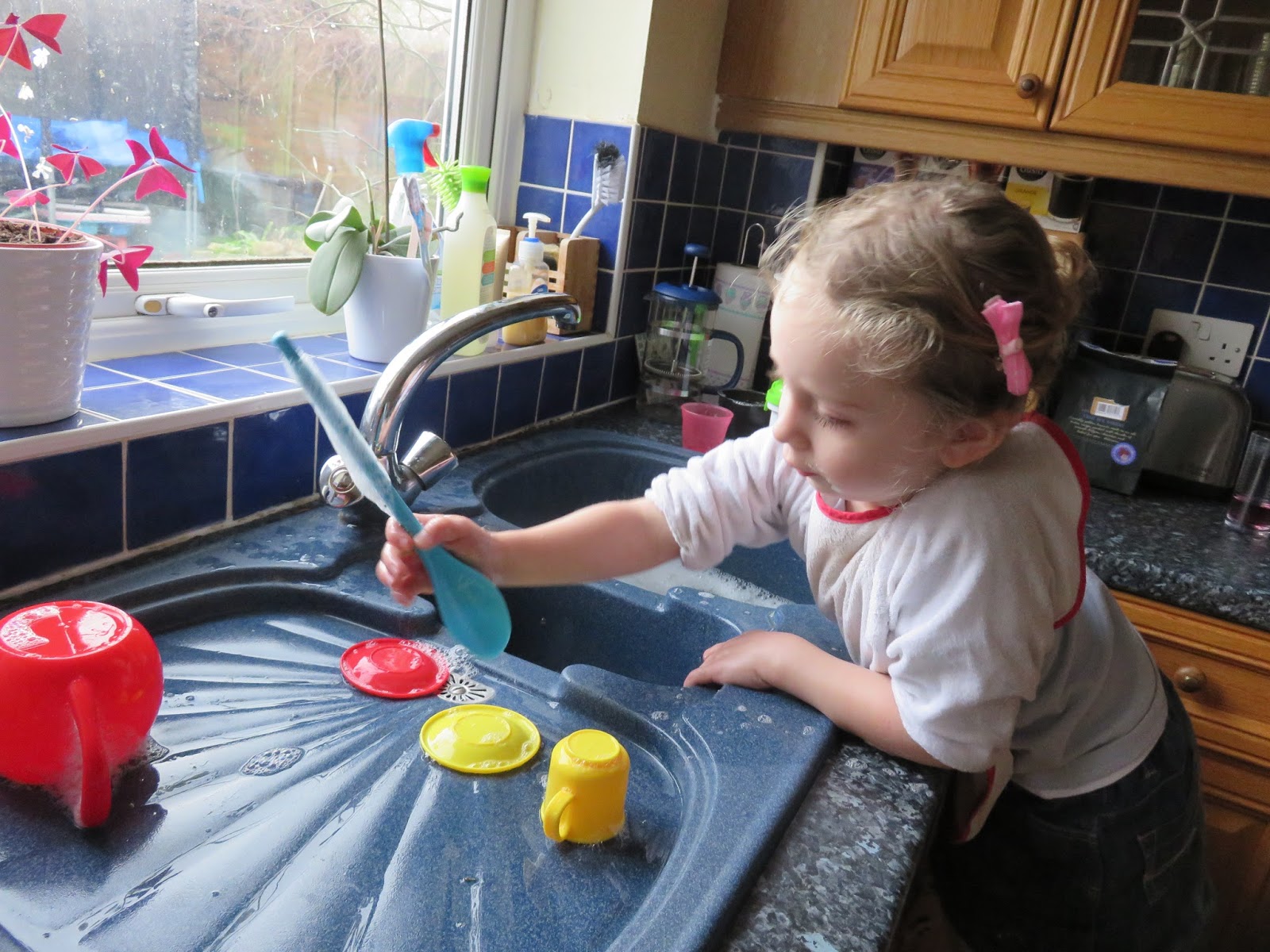 There was plenty more tipping, filling, pouring and generally getting wet but everything including her was spotless and all traces of flour were gone. That is the thing I love most about gloop, being just cornflour and water it is so easy to clean. It washes/wipes off everything easily with a bit of water and a cloth and it brushes off clothes as it dries and doesn't clog up the washing machine either like normal flour play can when clothes are particularly covered. 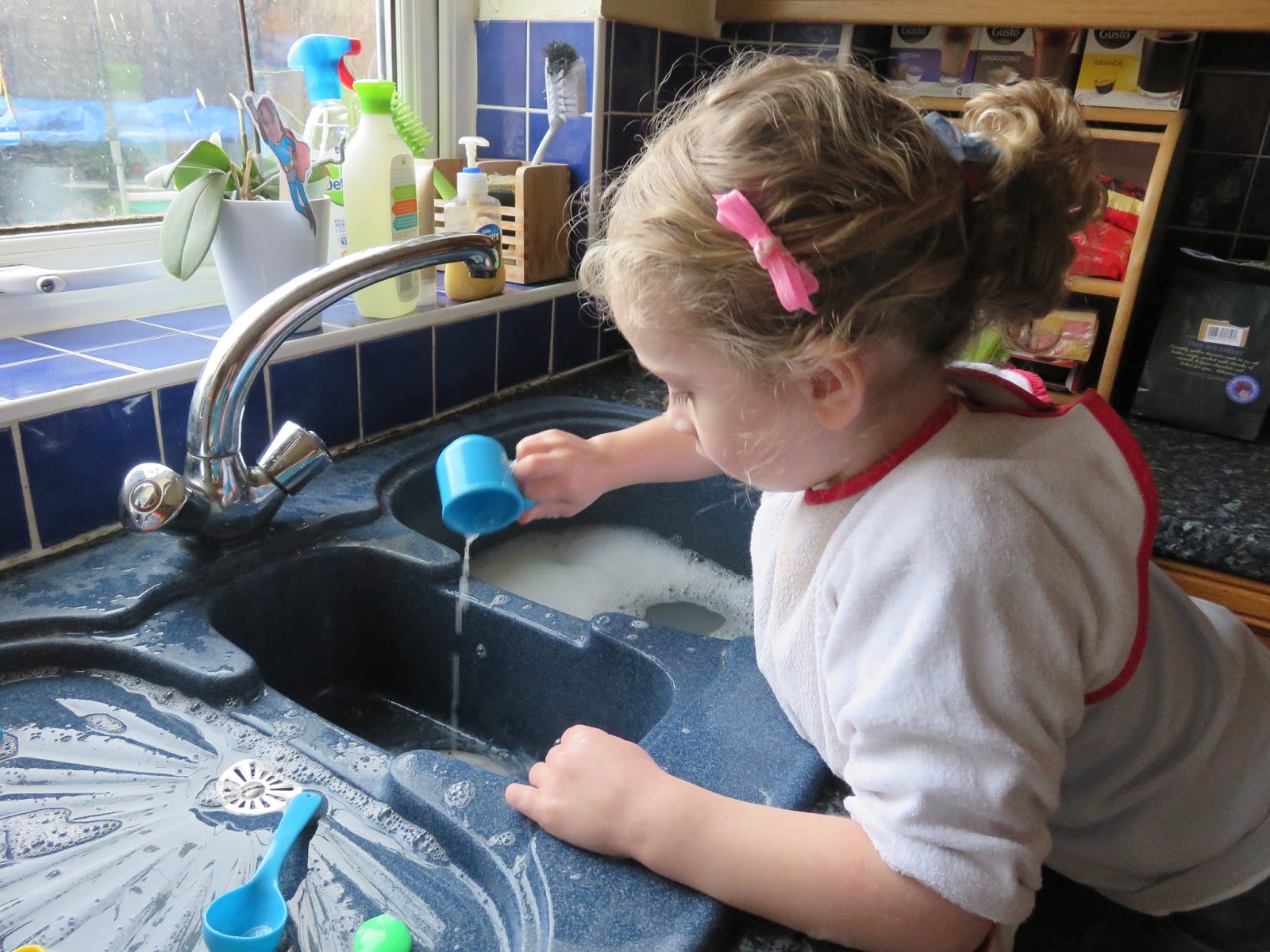 I am glad I made the effort to do all these creative things with her this week, they were all so simple and didn't cost hardly anything, it was obvious that she had fun and I did too. I think after all the glitter and creations from Christmas we had just got used to playing and a bit of colouring each day rather than actually doing something messy and fun. I am already thinking what we can do next week, some sticking and painting perhaps....
at 9:56 pm
Email ThisBlogThis!Share to TwitterShare to FacebookShare to Pinterest
Labels: games, little 2, messy play, roleplay