How much do we stifle our children's creativity?

Recently I have been thinking about how much (or how little) freedom I give my children to be children and be freely creative. It all stems back to a post I wrote last May when Little 1 came home from preschool with a box of pet snails (check out the post here - the snail one) and she drew this picture. 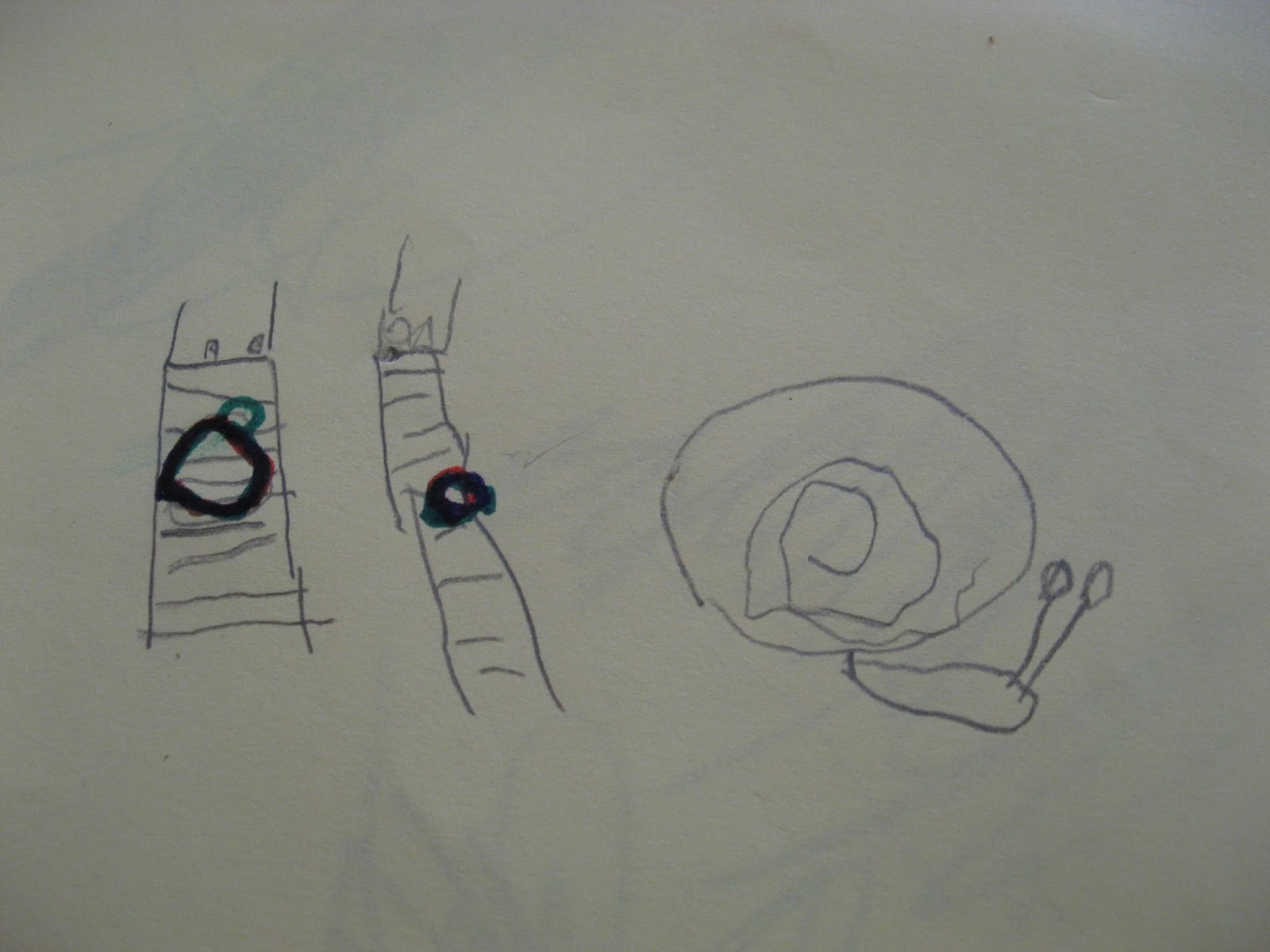 Having shown an interest in the snails and watched them for a while she chose to draw a picture, she drew the two pictures on the left, top down views of the snails with their shells on their backs, the way she saw them from the top of the box. I don't know what compelled me to do it but after praising her efforts I suggested she draw one from the side, a view that we are all more comfortable with and the 'normal' way to draw a snail, I don't really know why I did it and had to have a more 'normal' image of a snail to pin to the wall. I regretted it afterwards and wished I hadn't done that. Why did her drawing have to be like everyone elses?

It was this comment left on my snail post that really got me thinking about what had happened in that drawing session and has caused me to think about my actions several times since then.

''.......I am completely smitten with her drawings. In the UK an adult or older child
would never draw a top down view of a snail like that, as she gets older she'll
realise it's not usual and wouldn't do it. So much creativity is stifled by accepted
norms - alas it's the same for everybody :) ''
- Comment from www.TheBrickCastle.com

I was thinking about what I could write in this post and a few examples I could use to indicate how much we dictate our children's creativity and persuade them to conform to the 'norm' if there is such a thing, when two examples were presented to me that very afternoon.

Firstly Little 2 wanted the train track out, I was pottering and finishing off some housework so she set out building a track by herself, she did really well and built this all by herself over about 5 minutes (from the bridge until the end). 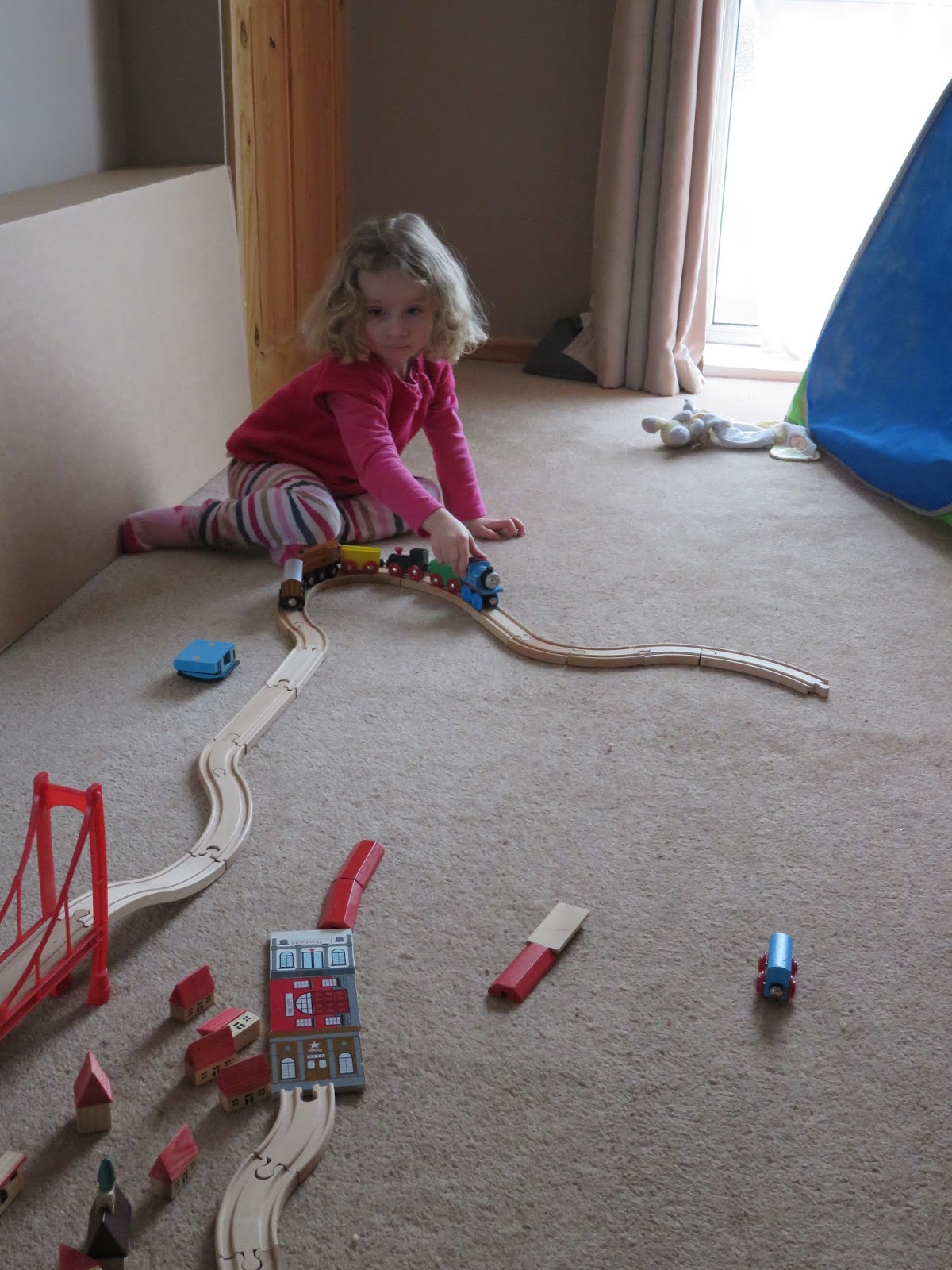 I had then finished my jobs and went to join her by helping build the track on the other side of the bridge and back around until I ran out of track. Now if I had built the whole track I would have ensured it had met in the middle or altered it so that it did when I'd run out of pieces, why, because it just had to in my mind. But as Little 2 had built most of the track herself and was pleased with her efforts (and with this post in mind) I didn't do anything else. 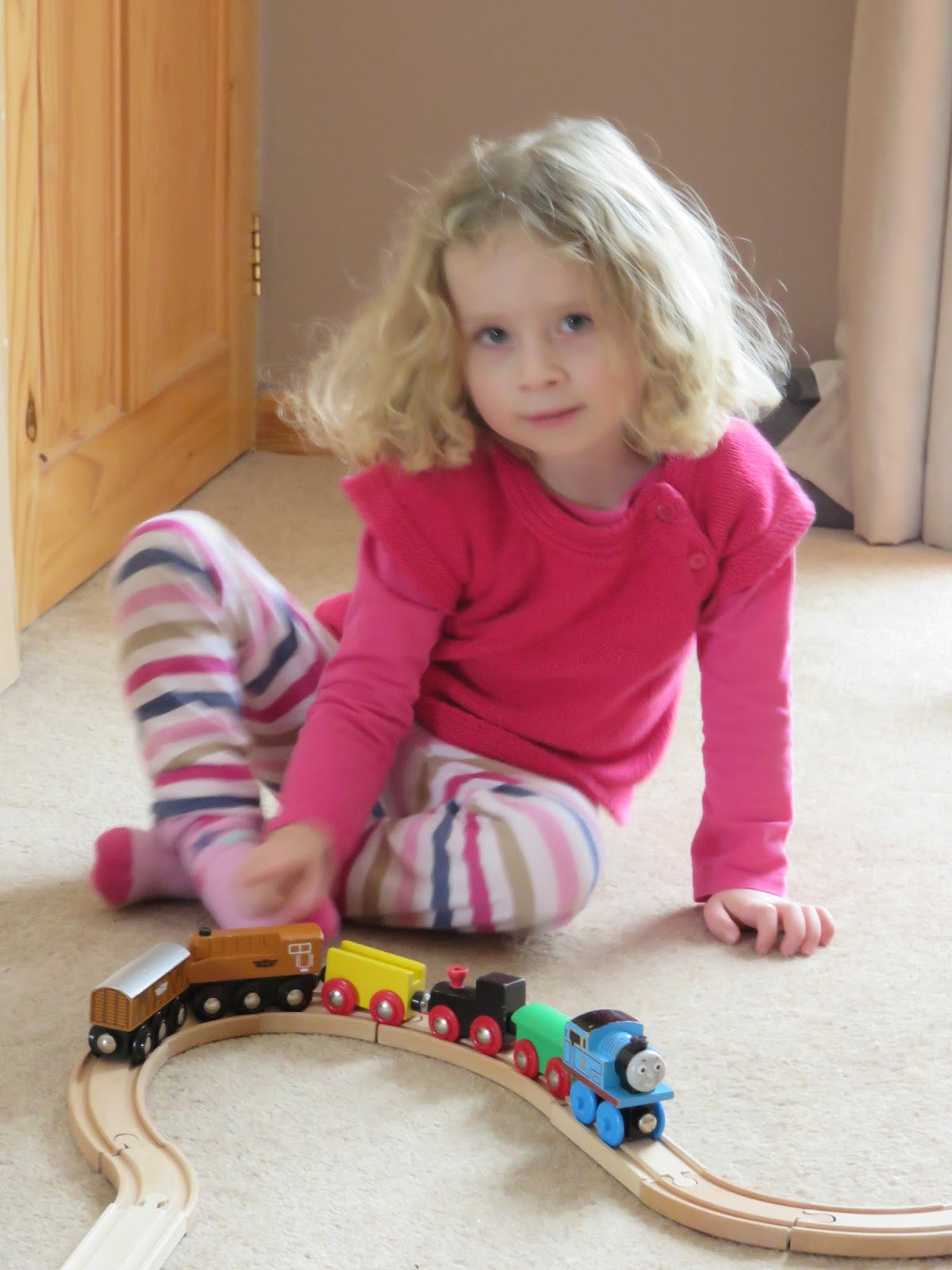 Little 2 and I played a while up and down the track, maybe 10 minutes or so and then she used the train on the carpet to reach the other end of track, she mentioned that the track wasn't finished and had a look in the box. There were other bits of buildings and gates from the village in there so I watched as she lengthened the track using these bits and created a little road to run the train between. 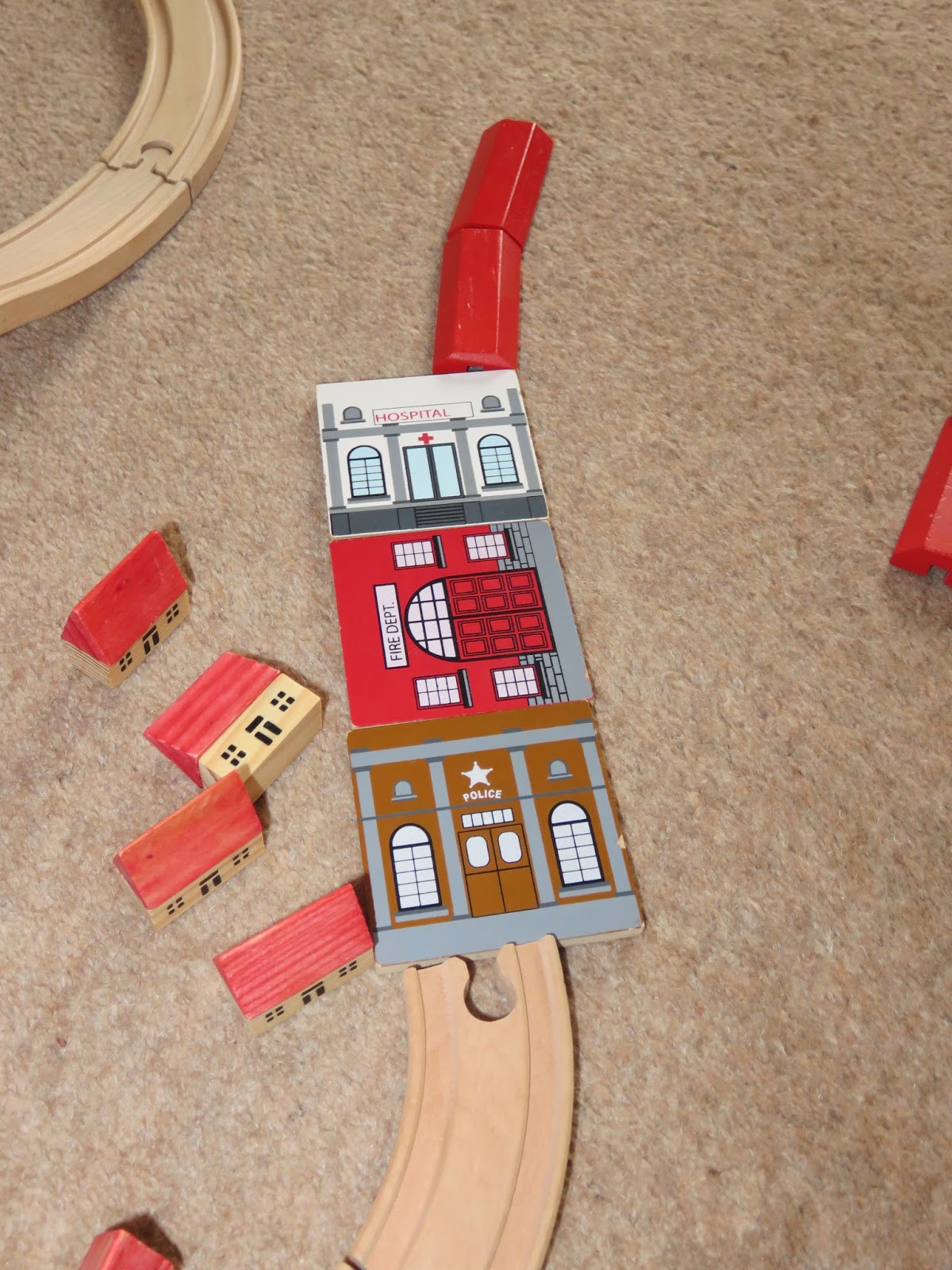 We played with our track for a good hour and then ended up singing train and car related songs as she sat in the box and drove a train/car. I am glad I left the track as it was and didn't change it, what did it matter anyway? 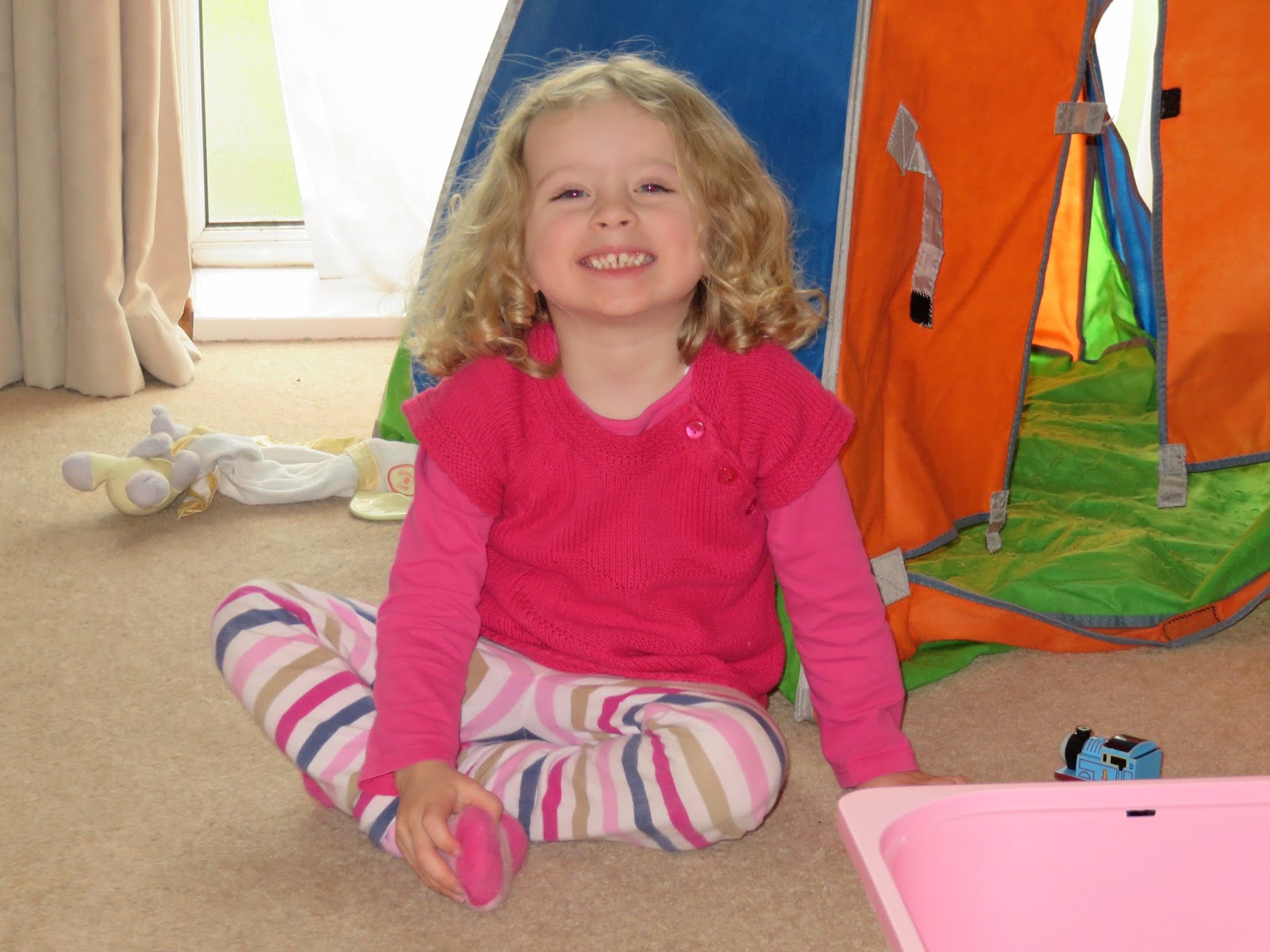 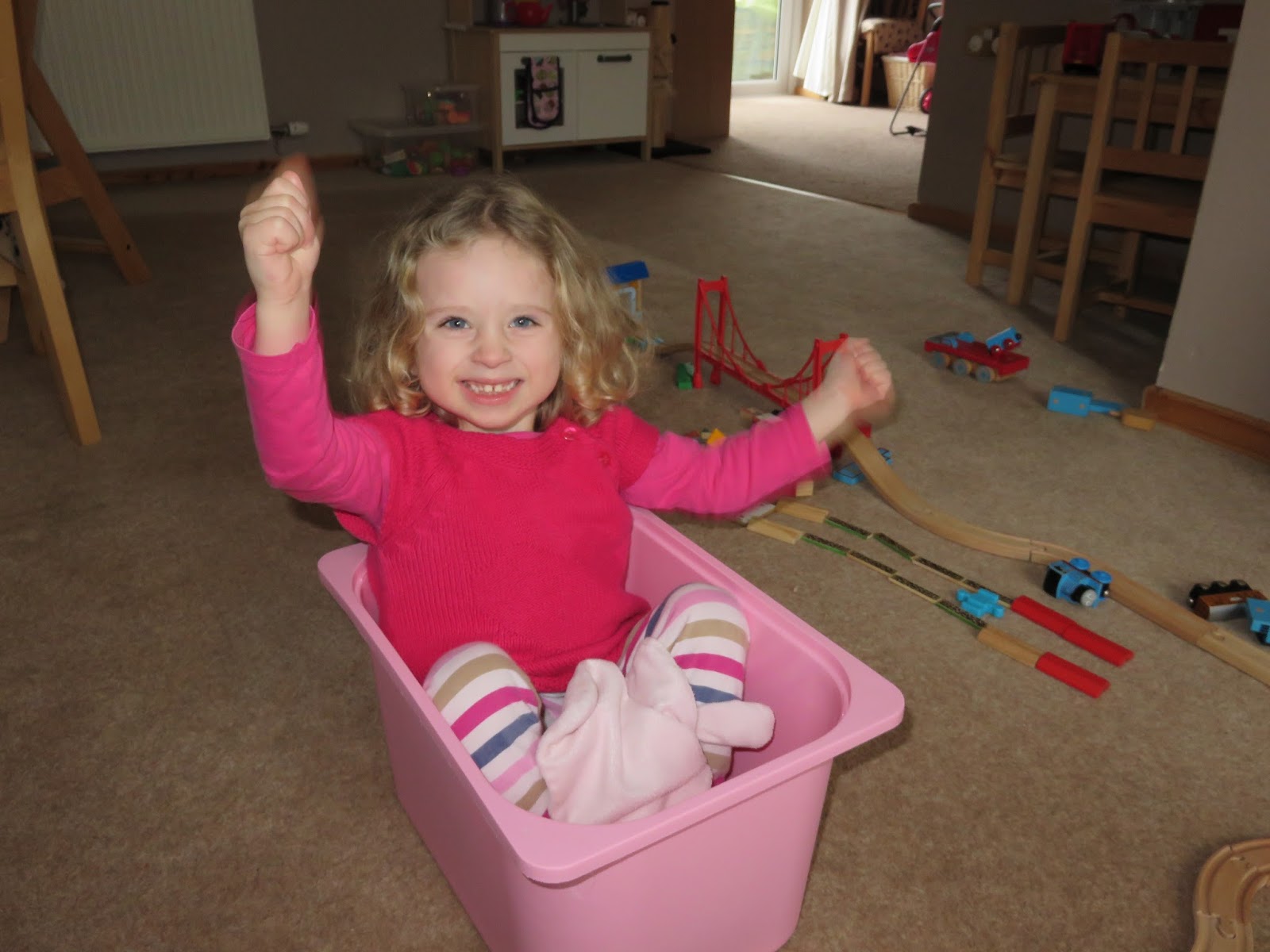 The second incidence was just half an hour later when I collected Little 1 from school, as I checked her school bag for notes etc I pulled out a pile of colouring pages she had done. 5 pictures were Christmas pictures that she had coloured in multi colours using every available shade (see below). This is how she has coloured in since the summer, all her pictures look like this at the moment, it is what she likes to do and I don't have a problem with it. She knows that a baby is not green and a mince pie is brown, she is proud of her artwork and so are we. 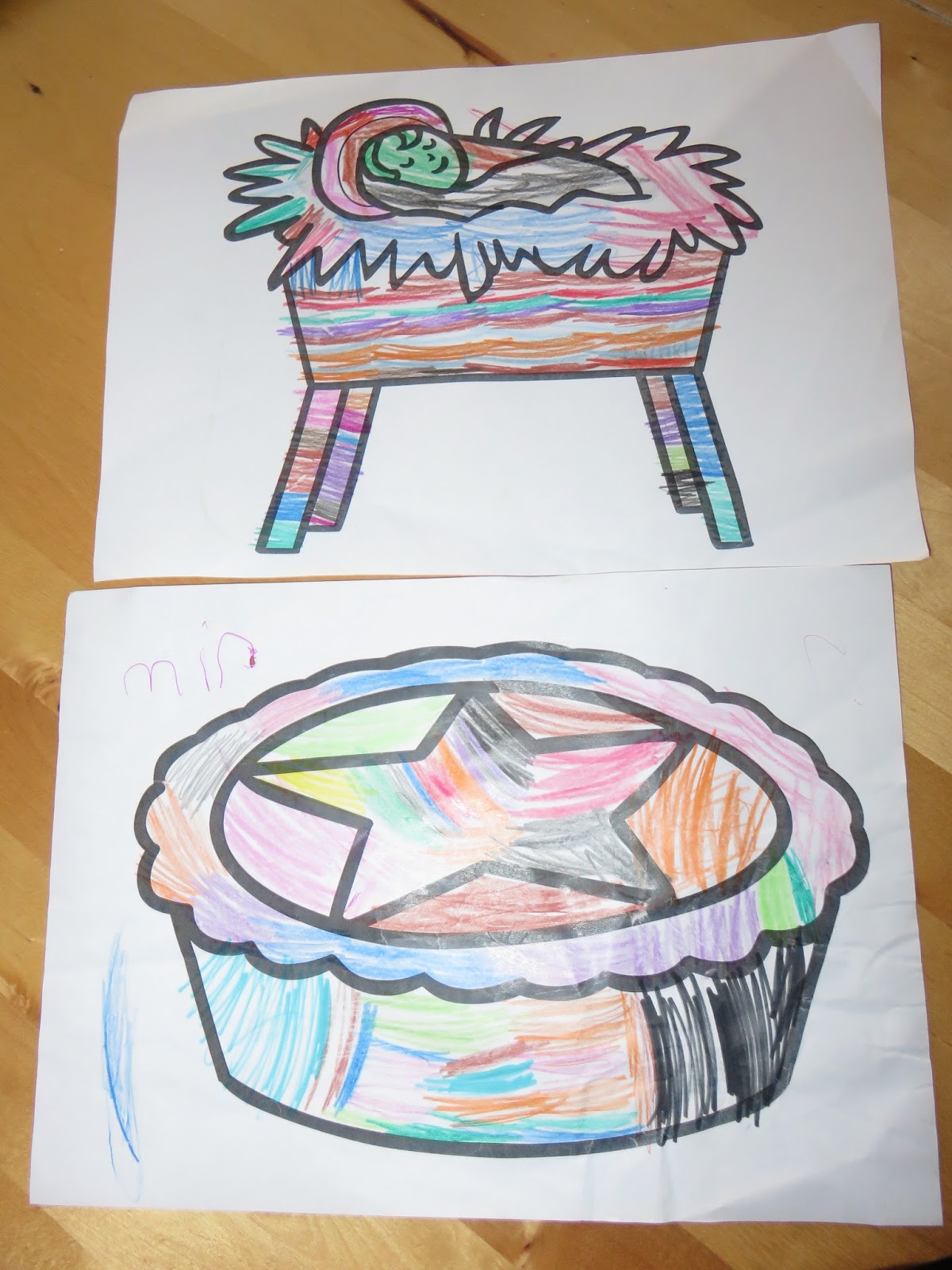 The next picture I found was a colour by numbers christmas tree, all coloured correctly as per the instructions and with a comment underneath it, Great colouring Little 1, which had obviously come from one of the teaching staff. Little 1 spotted me looking at it and told me that she had shown the multicoloured work to her teaching assistant who had asked her if she would like to do another colouring and gave her the colour by numbers, it may just have been a coincidence or a class activity I have no idea but was it a subtle suggestion that this was the way it should be done?? After all there were no comments on the other colouring pages!

So having spent the past few days thinking about what I say and what I do relating to the Little ones I have realised just how much, in daily life, I guide them towards the norm or tell them something has to be this way, make suggestions or guide them when they are doing something.

I hereby promise that I will take a step back and let them be children, let them use their creativity their way and let them do it the way they want to do it and not try to 'help' or correct them too much, after all society will knock them into shape whether I like it or not sooner or later.

(I also promise that later on when we decorate the Christmas tree with Daddy I will not adjust the baubles when the children have gone to bed even if it means they are all on the same square foot of tree.)

Do you let your child be free to do things their way or do you correct them and guide them towards the socially acceptable norm or they way you would do it?? What do they do when we take a step back and just let them be??
at 2:51 pm
Email ThisBlogThis!Share to TwitterShare to FacebookShare to Pinterest
Labels: games, little ones, mummy, playing