Last Friday was Children in Need, Little 1 came home from school with a note the week before saying they could wear a superhero costume to school if they donated. Their topic this term is also Superheros so she has been talking about super powers, making rockets, bad guys and catching villains as well as the lost crown jewels(!) for the last couple of weeks and I knew she would enjoy dressing up.

We didn't have anything at home, despite a drawer full of dressing up, that could resemble a superhero, we did have a cat ears, tail etc that she could have worn with black clothes and a black cape to be cat woman but 'No' that was not a superhero no matter how hard I tried to convince her!

So I took to good ole ebay and searched for superhero dress up, I knew lots of children would go as superwoman and with the prices of the outfits escalating due to the theme of this years Children in Need, I thought I'd have a go at making my own costume.

One of the first things I came across after changing my search to fabric was this brilliant pink superhero fabric, I thought it was perfect for a cape and would look great, there was also green and blue versions available too but for us it had to be pink! 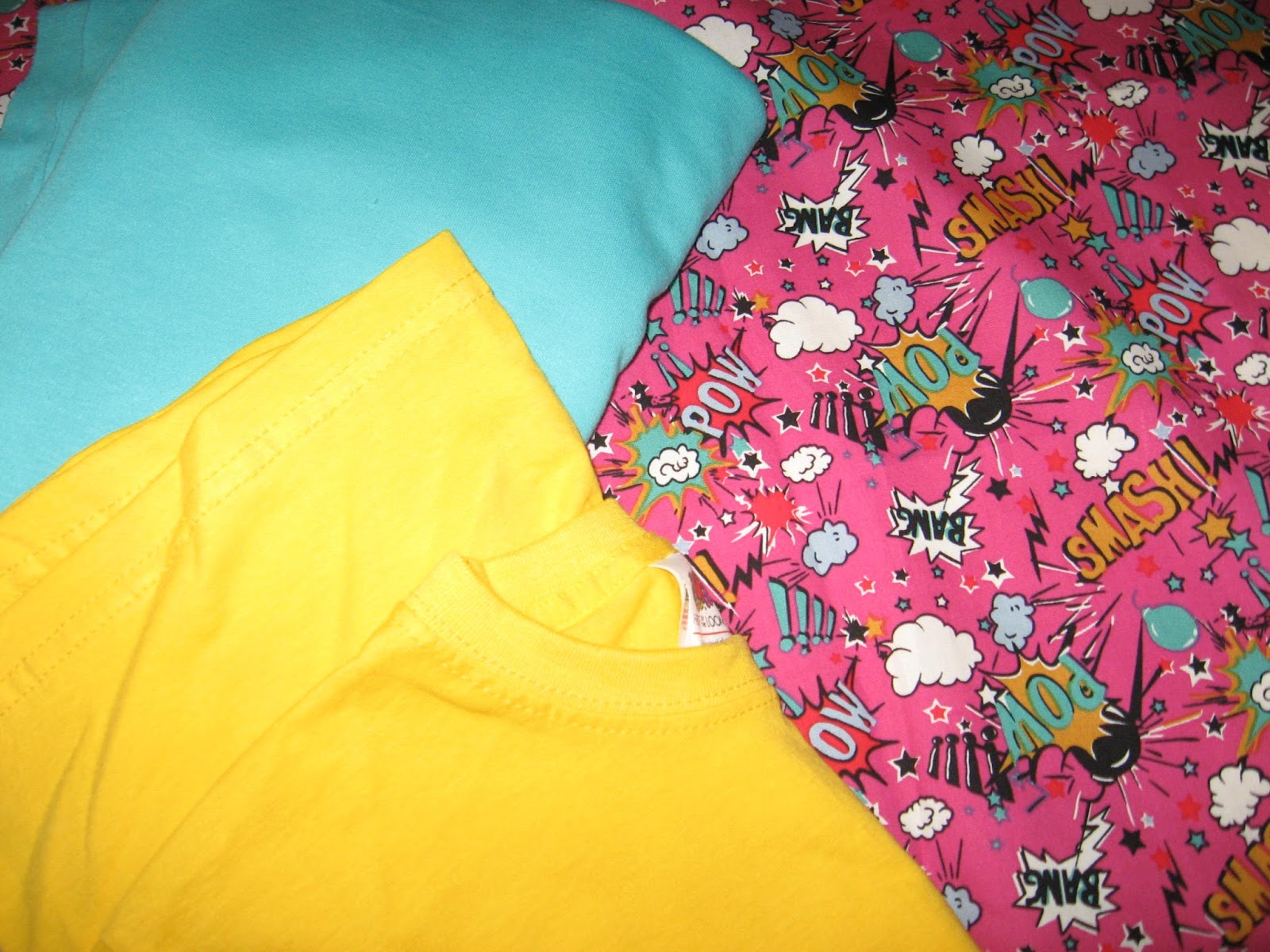 I then, after thinking about the colours in the fabric, decided she could wear her black leggings and I would buy a yellow t-shirt and some turquoise fabric to sort of copy the 'POW' bit and make her look like a superhero.

Once it all arrived I got snipping, pinning and sewing (I ended up with some help from Nanny with the sewing as it was taking hours!) There were also problems with the turquoise fabric as it was really stretchy so the sewing machine kept catching and pulling it, grr. 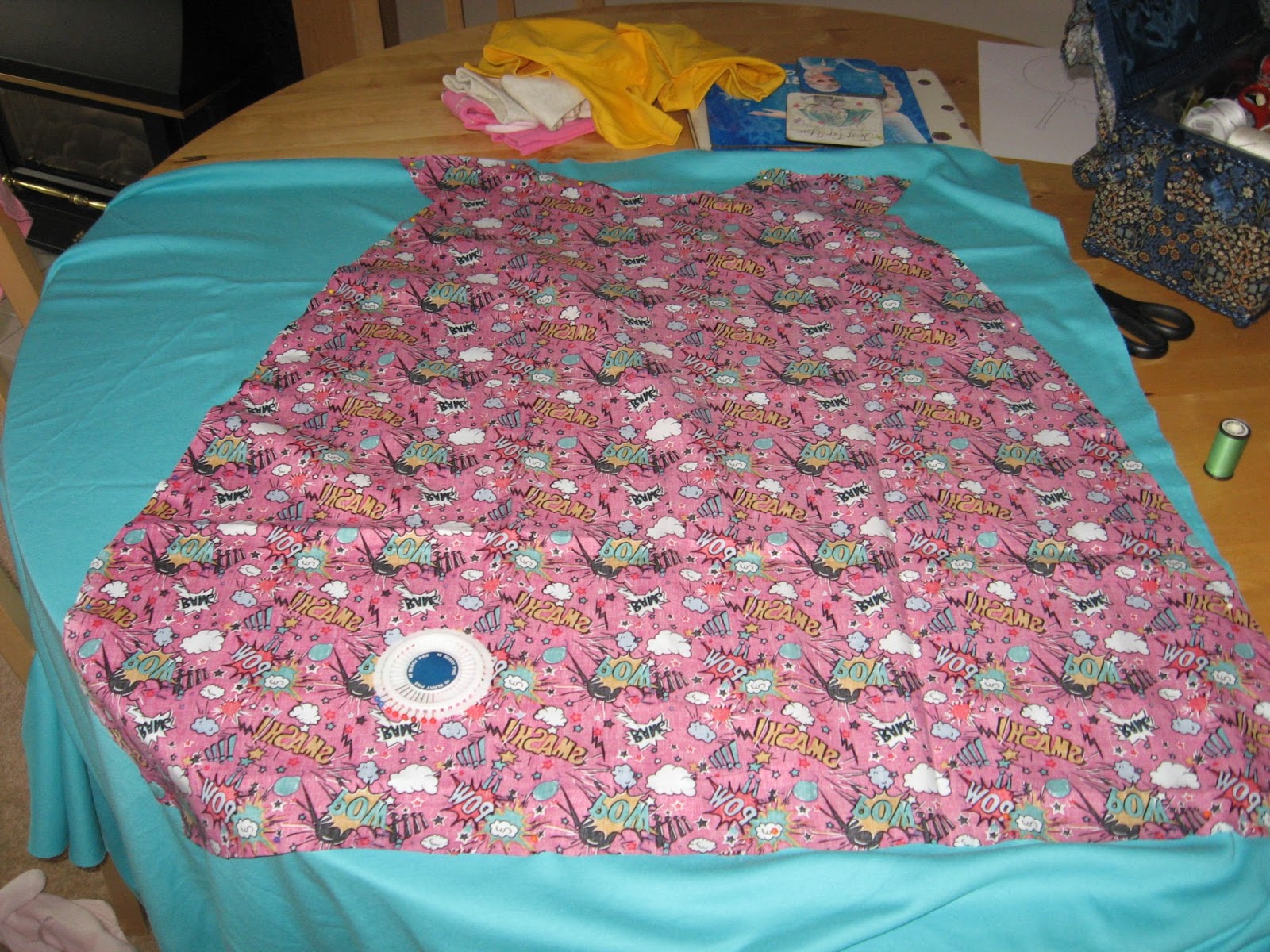 First I cut out a cape shape out of the pink fabric using the t-shirt as a size guide as Little 1 was at school. I made sure to leave a couple of bits at the top for the neck bit and then pinned the pink fabric to the turquoise fabric back to front and cut that one too. I sewed it using the sewing machine and then turned it right side out and sewed around the edge again so it all looked neat. 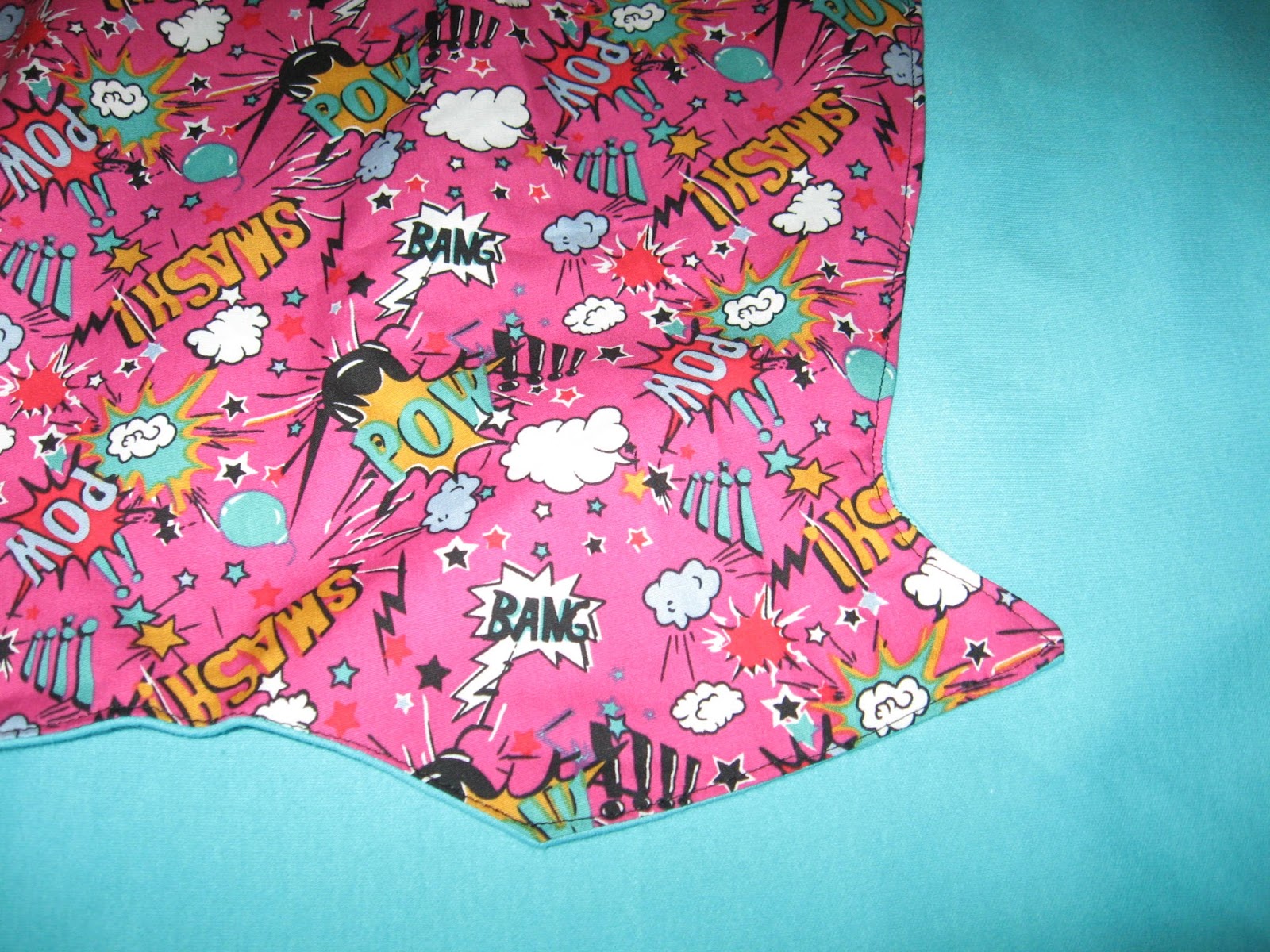 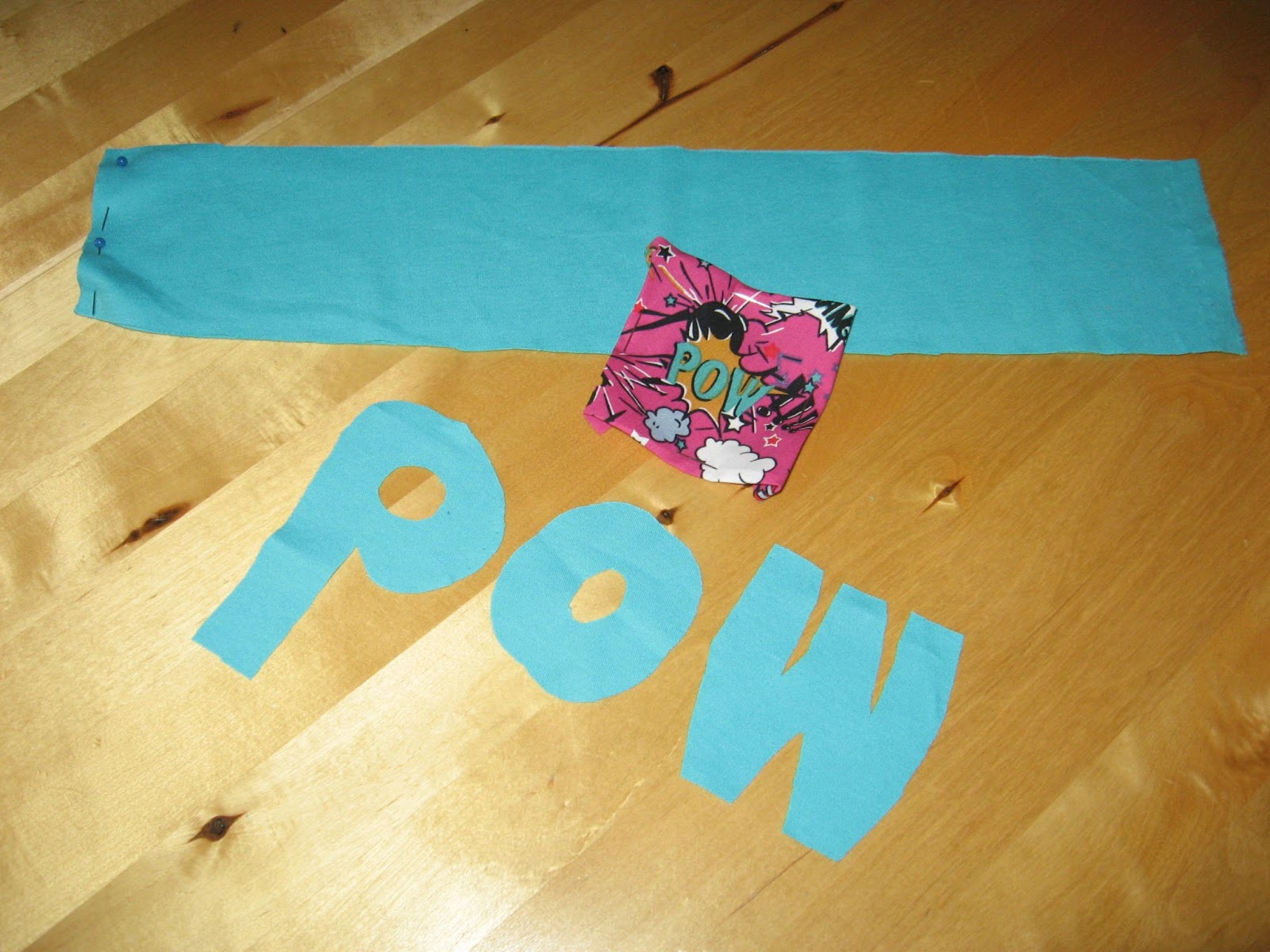 There was still lots of material left so I decided to make some sleeves too as I thought Little 1 might be chilly in just a vest and t-shirt at school as she didn't have a jumper that would go with the outfit. That was simple and involved sewing a piece of material the right size in half, turning it right side out and then attaching it to the sleeves.

I also attached a popper and strip of material between the shoulders at the front of the cape so that Little 1 could take it on and off easily, I wasn't keen on using a tie cord especially as she would be wearing it at school and it might get pulled when she was playing in the playground.

I made her mask by just cutting a small piece of card in a mask shape with eye holes and glued a strip of leftover material on to it then cut around it so that it would keep it's shape and she would be able to see. I livened it up with a little strip of the pink material glued on there too and it was just tied loosely onto her head.

Here is the finished product, what do you think? Little 1 said 'Wow' when she saw it!! She loved wearing it to school and refused to take it off until she went to bed that night. There was quite a bit of material left over so we made Little 2 her own superhero cape too. The bonus to it all is that as the reverse side is turquoise the girls have been wearing their capes backwards and pretending to be Elsa from frozen too! 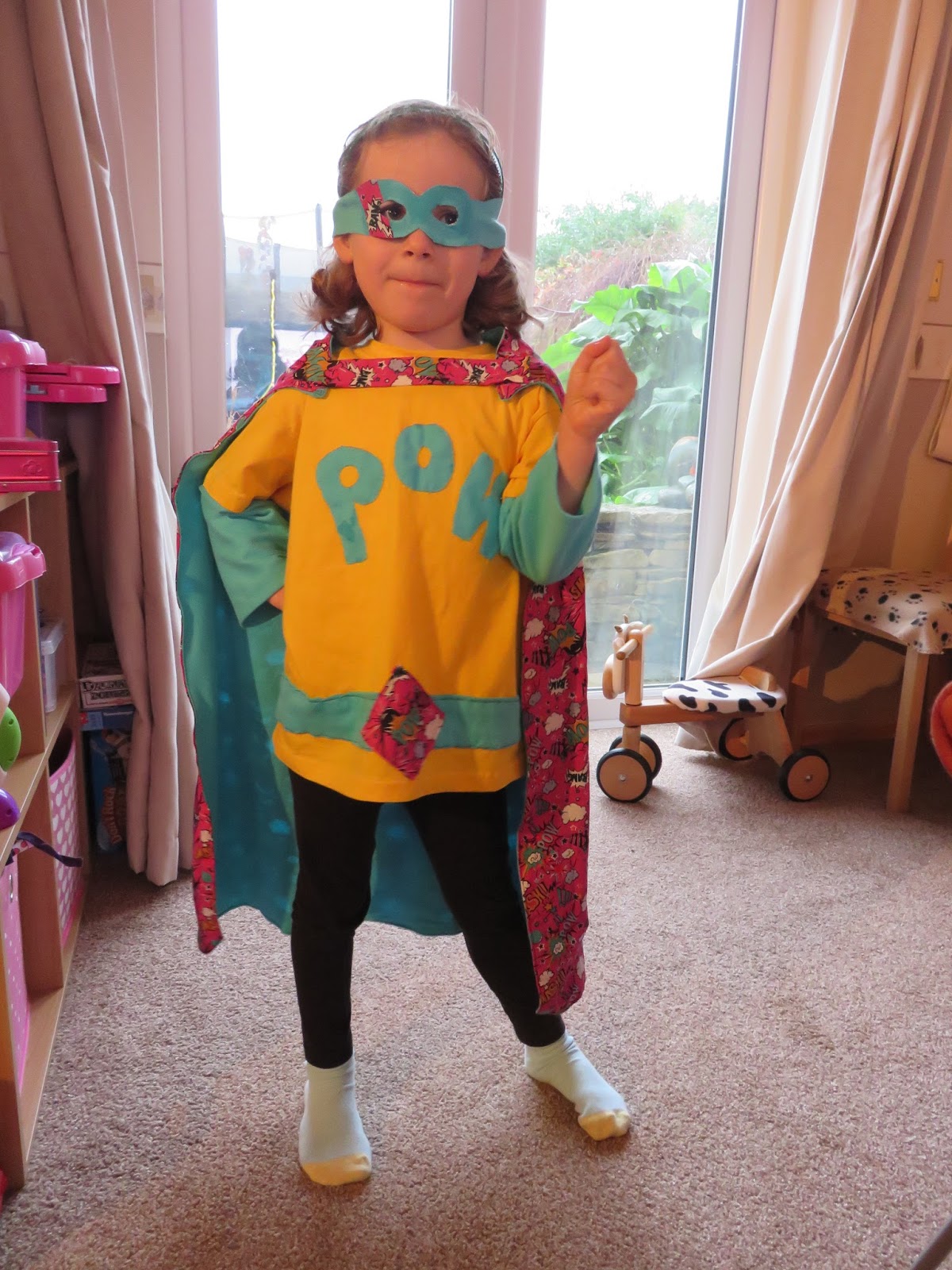 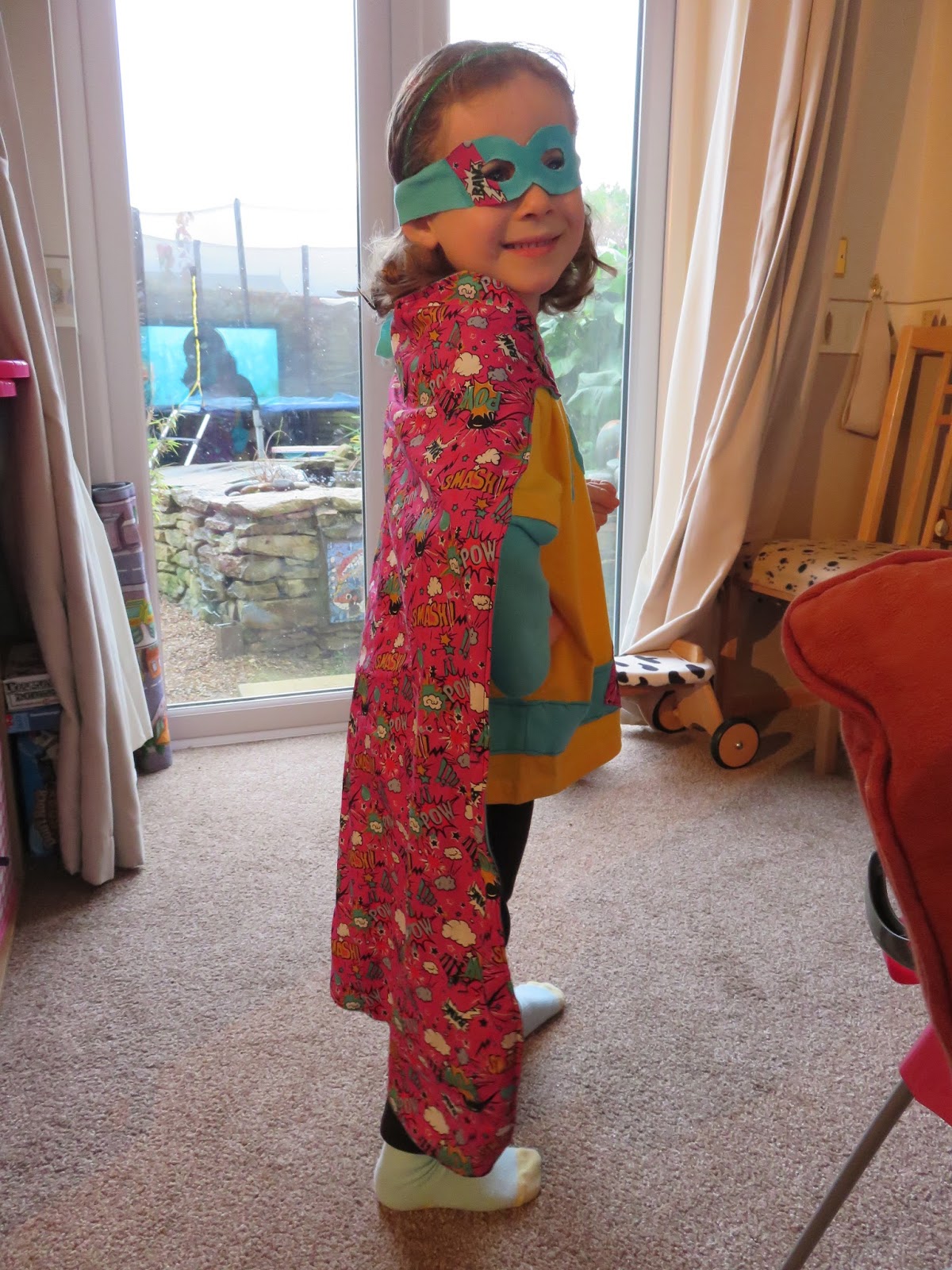 What kind of superhero would you be and what would your costume look like?
at 10:32 pm
Email ThisBlogThis!Share to TwitterShare to FacebookShare to Pinterest
Labels: getting crafty, little 1, mummy