It has been a busy week and I have got a little behind blogging, so here it is the last post about our Devon holiday last week.

To finish off our holiday to North and South Devon we spent the day visiting my Dad (the Little ones Grandad), as it is his 60th birthday this week we decided to go out for the day and have a family day out. My brother, Uncle M, was with us too as he had spent the weekend staying with dad and we were taking him home with us squashed in between all the bedding on the back seat!!

The weather was cool and showery so we looked for somewhere to go that had places to go inside if needed and I thought of a place that we used to go as children, Bicton Park Botanical Gardens, not far from Dad's house. 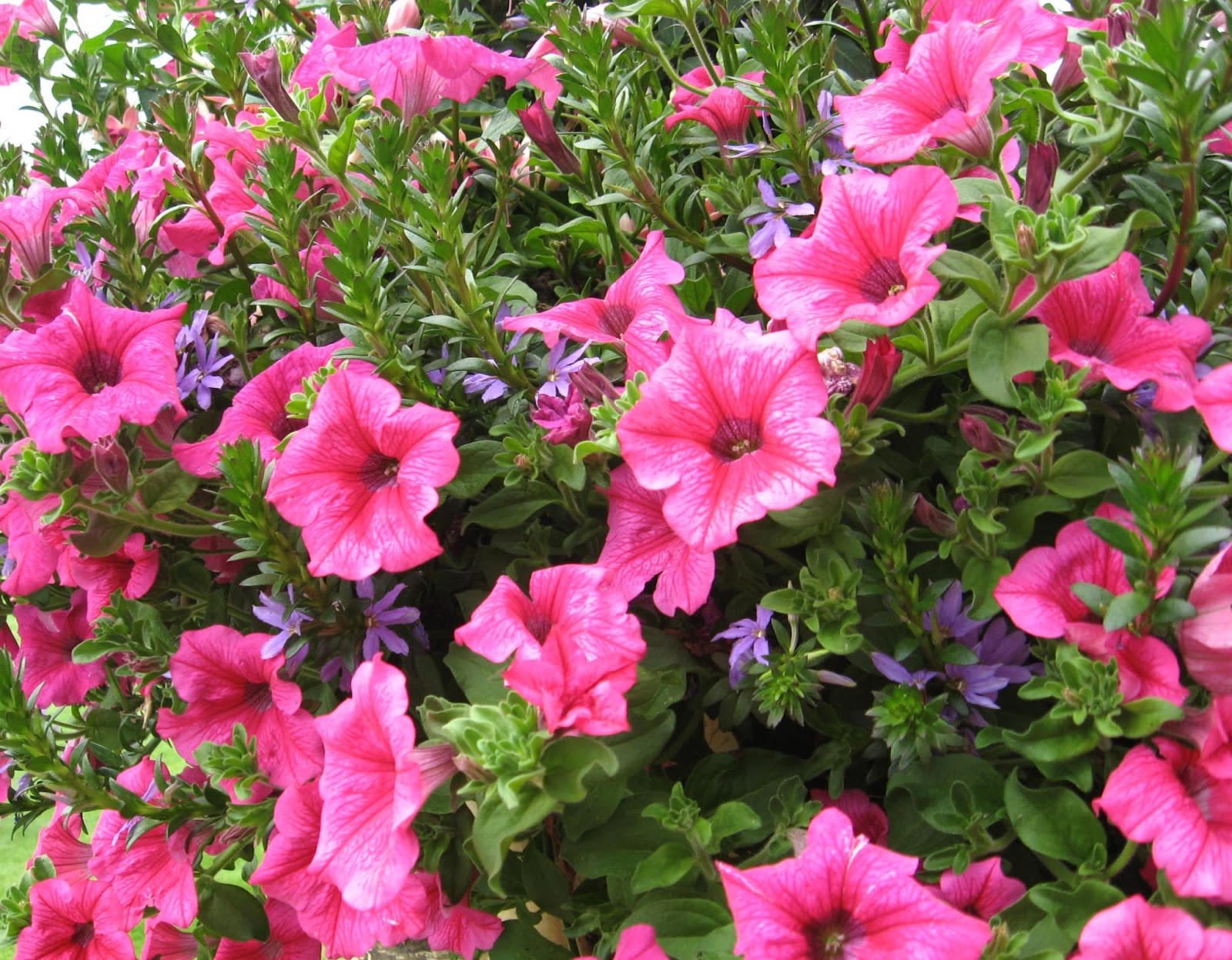 It is a great place to take children and spend an afternoon, there are lots of themed gardens to walk, or in the case of the Little ones run, around. There are greenhouses and a shell house as well as a church (that had fresh flower displays on the day we went but my camera didn't like the lighting and all the pictures were rubbish!) and waterways and ponds too. 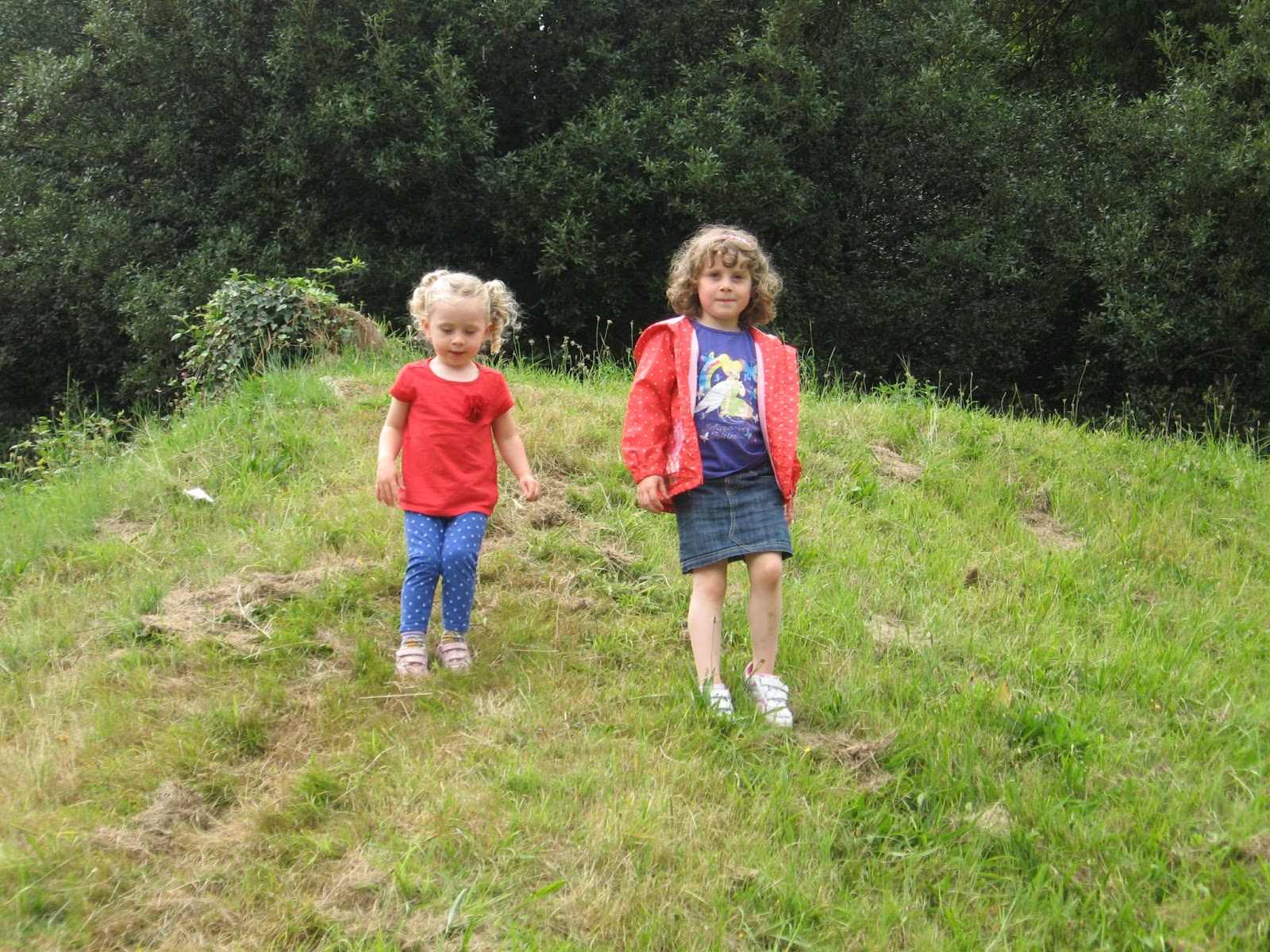 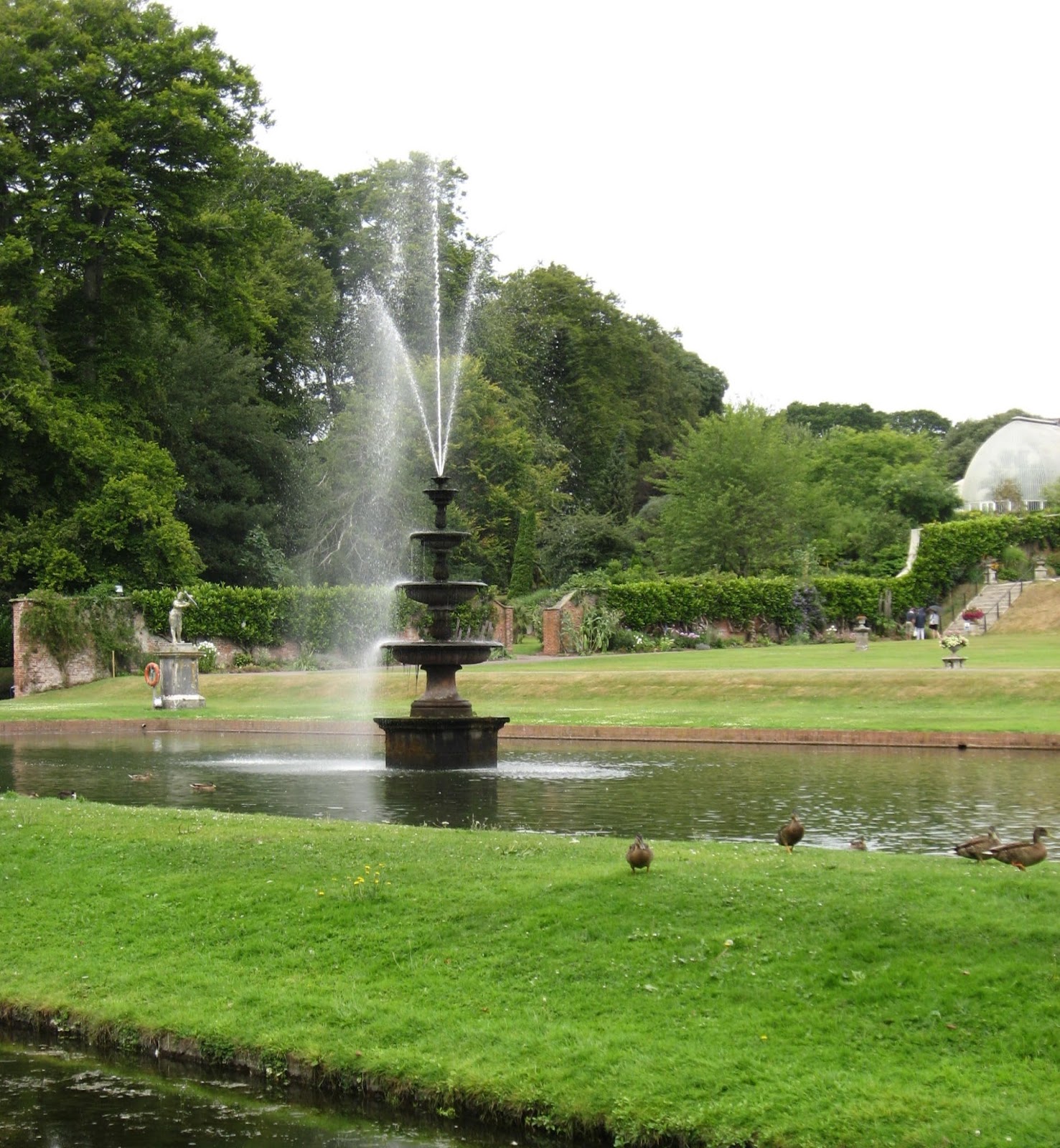 As well as all the greenery and gardens there is a train that runs around the park and a great outdoor play area and indoor soft play too. We queued up for a train near the end of the afternoon but it was so full we couldn't get on and the last one was too late as we needed to be getting on the motorway to go home. We promised the Little ones that next time we go we'll have a ride on the train, they didn't mind too much, they hopped on the pedal tractors instead. 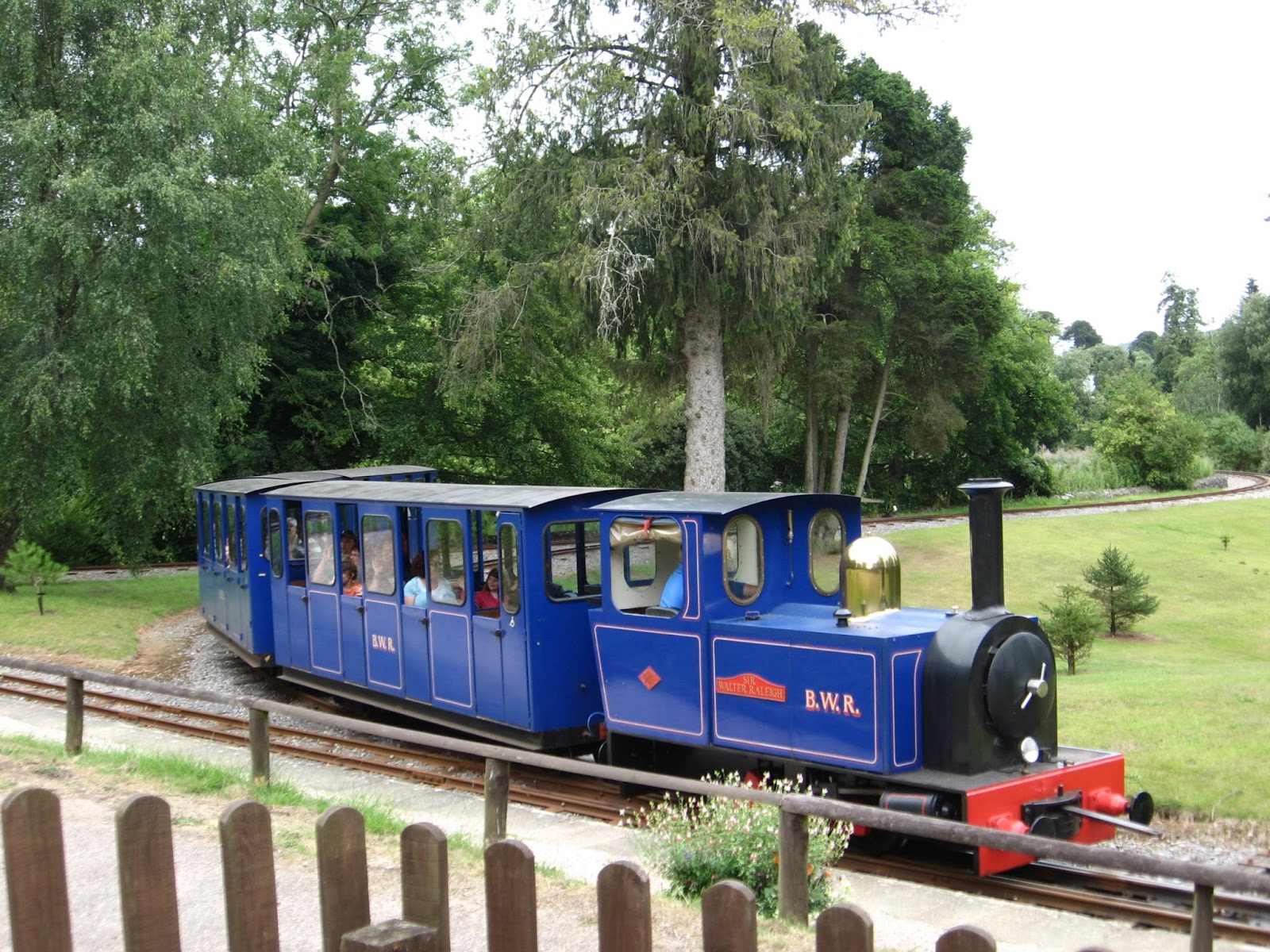 We had arrived at Bicton Park around lunchtime and decided to have a cooked lunch in the cafe as we would be travelling home over teatime and had no food at home having been away. The seating was in the orangery with views of the gardens and the big fountain, we tucked into jacket potatoes with cheesy beans which went down very well. Once we were fueled up we took the long route through some on the gardens to the outdoor play area. 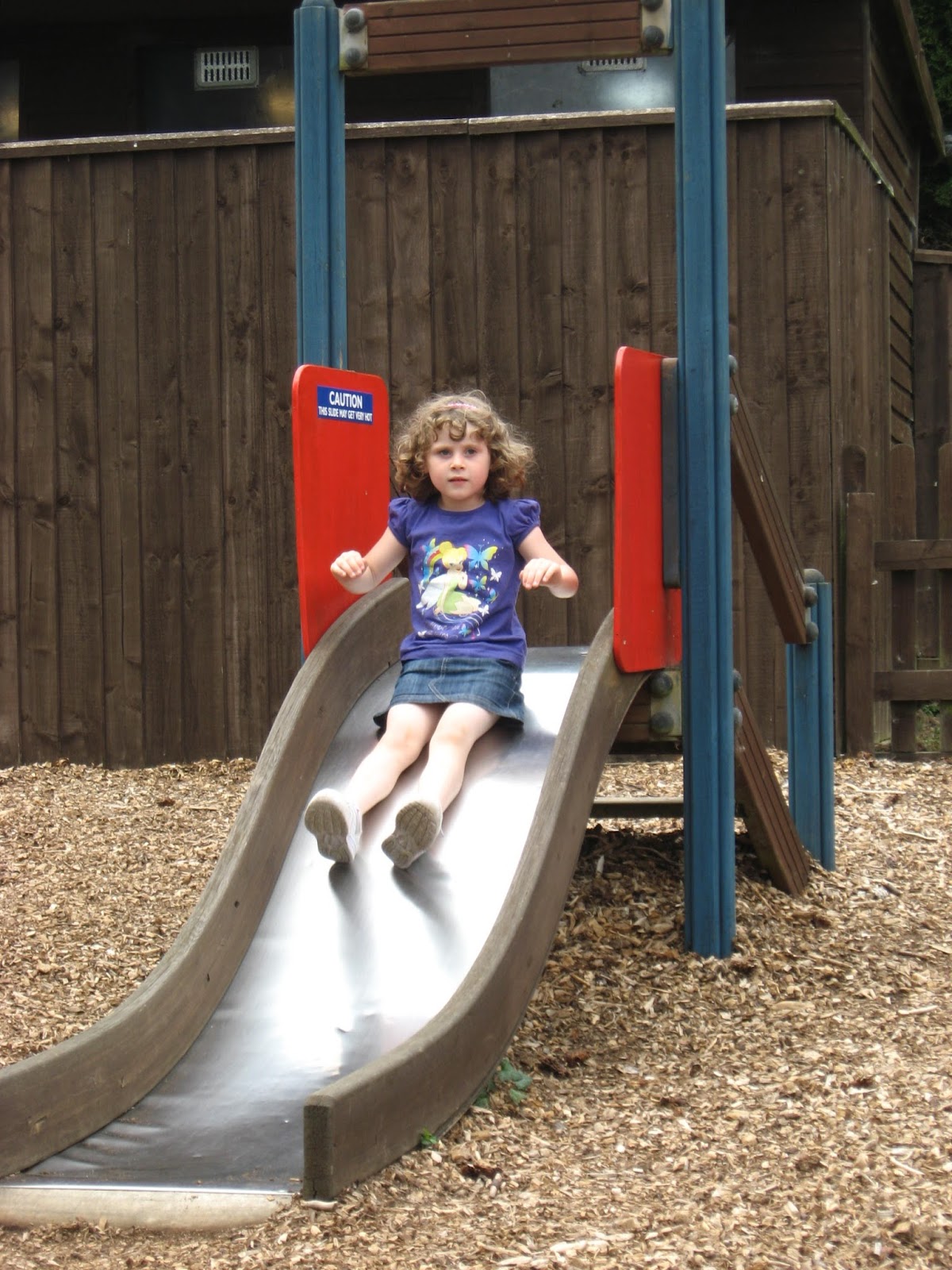 There were big slides and small slides, swings, things to zip and balance on, a maze and little play houses too, as well as a mini golf course- I think that was all!! 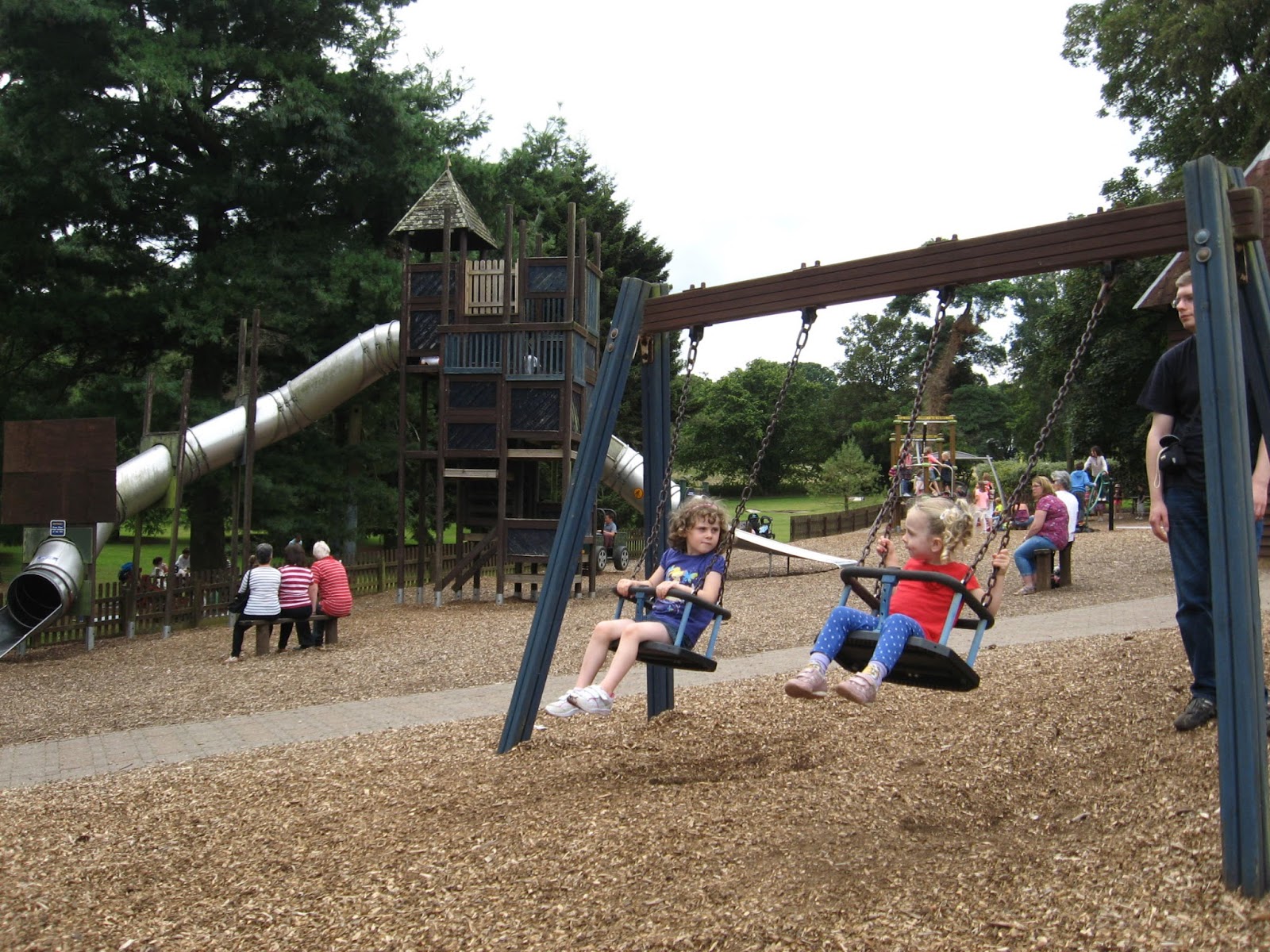 As well as some of the normal stuff there were some different things too, this roundabout that the Little ones liked was one where you had to pedal to move it, Little 2 couldn't reach the pedals but enjoyed the ride anyway. There was a funky see-saw that you stood up on and shot each other into the air and a different looking u-shaped zip wire too. 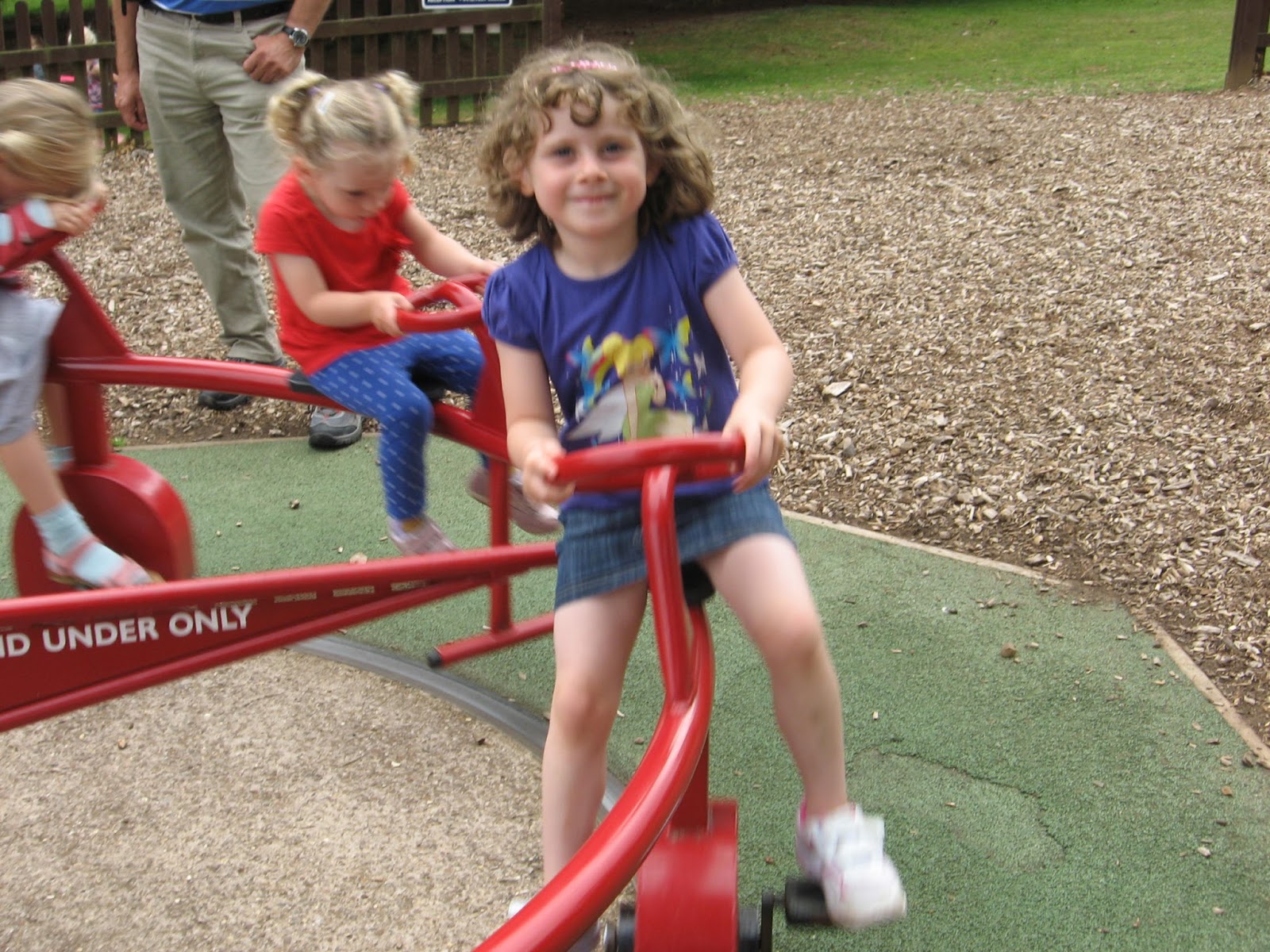 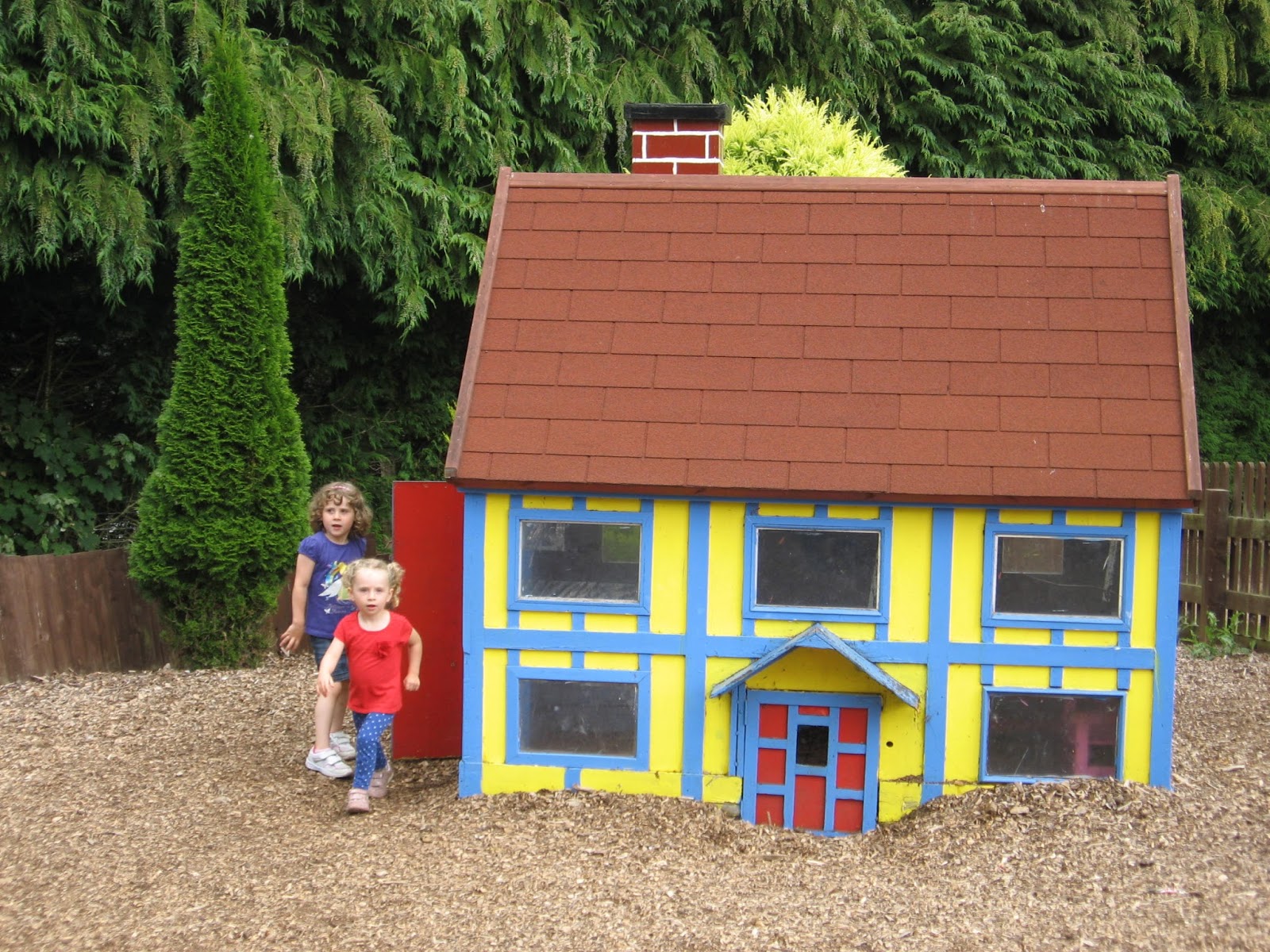 After a couple of hours playing and strolling around we headed back up to the cafe for the Little ones to have an ice cream and Mummy to share a cream tea with Grandad as despite having spent the last 9 days in Devon I still hadn't had one and I do like a scone and cream!!
Full of ice-cream the Little ones went a bit loopy running around the flowers on the lawn and Little 1 wanted to pose for some pictures and who was I to stop her! She does love having her picture taken. 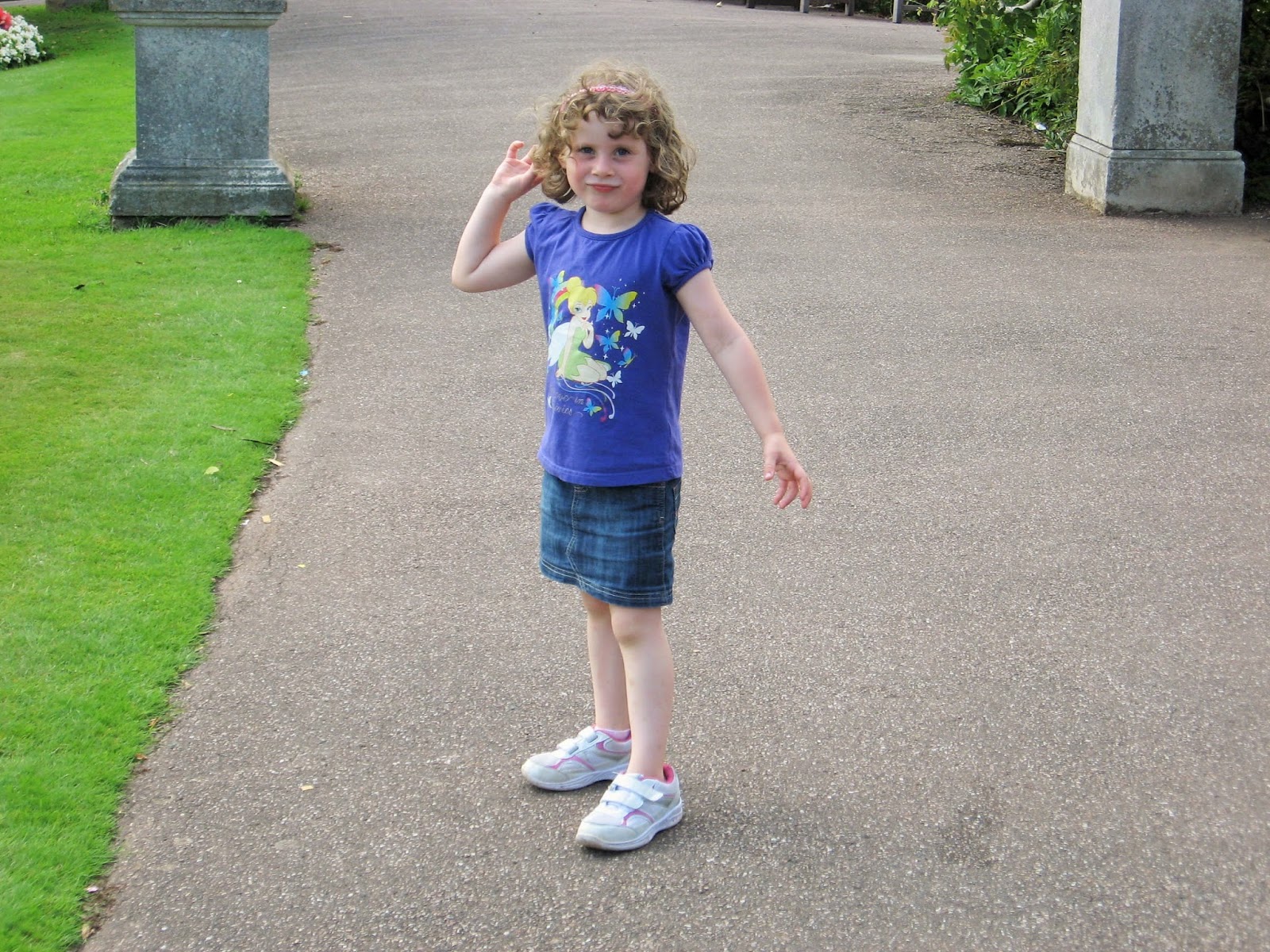 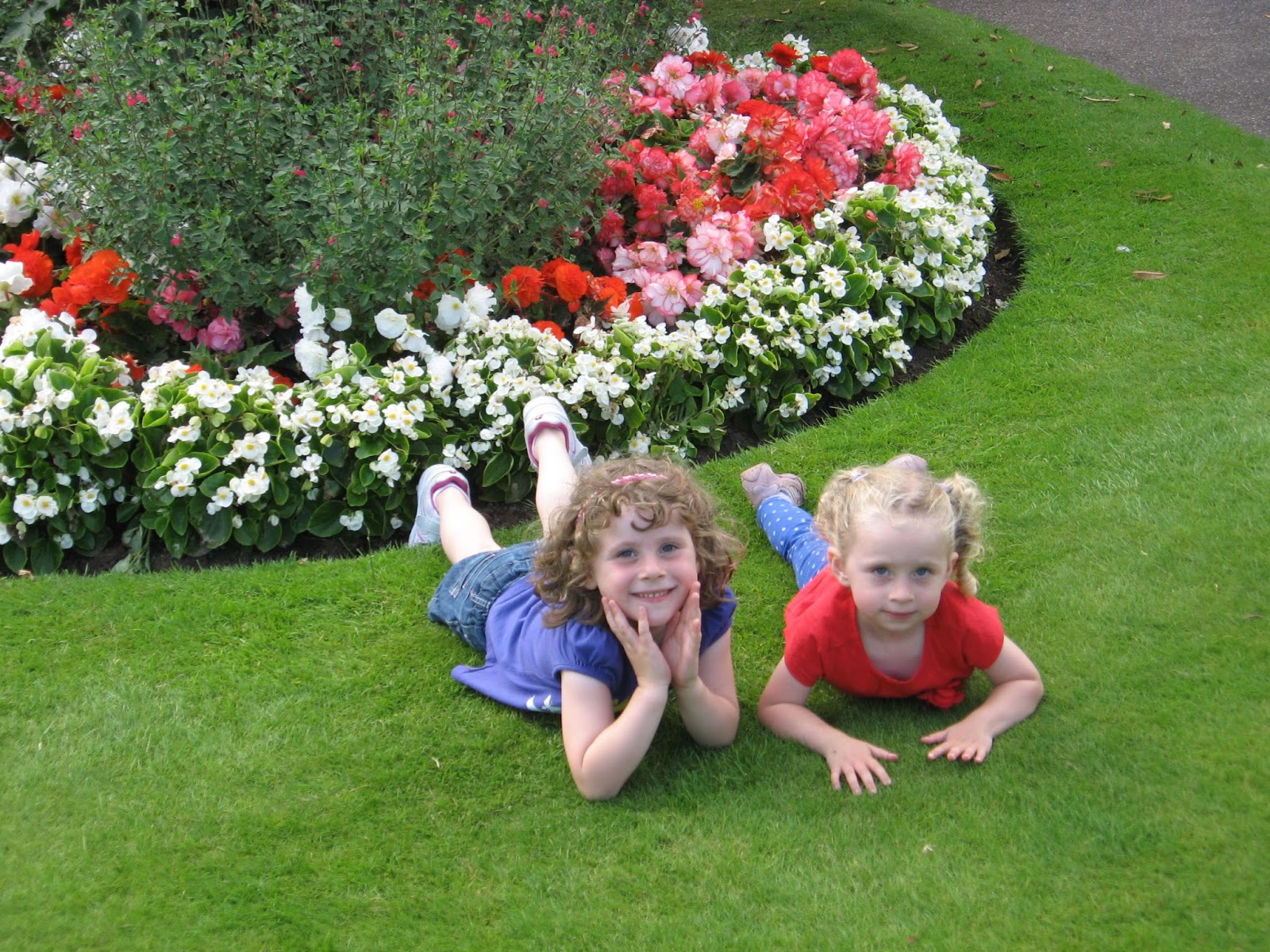 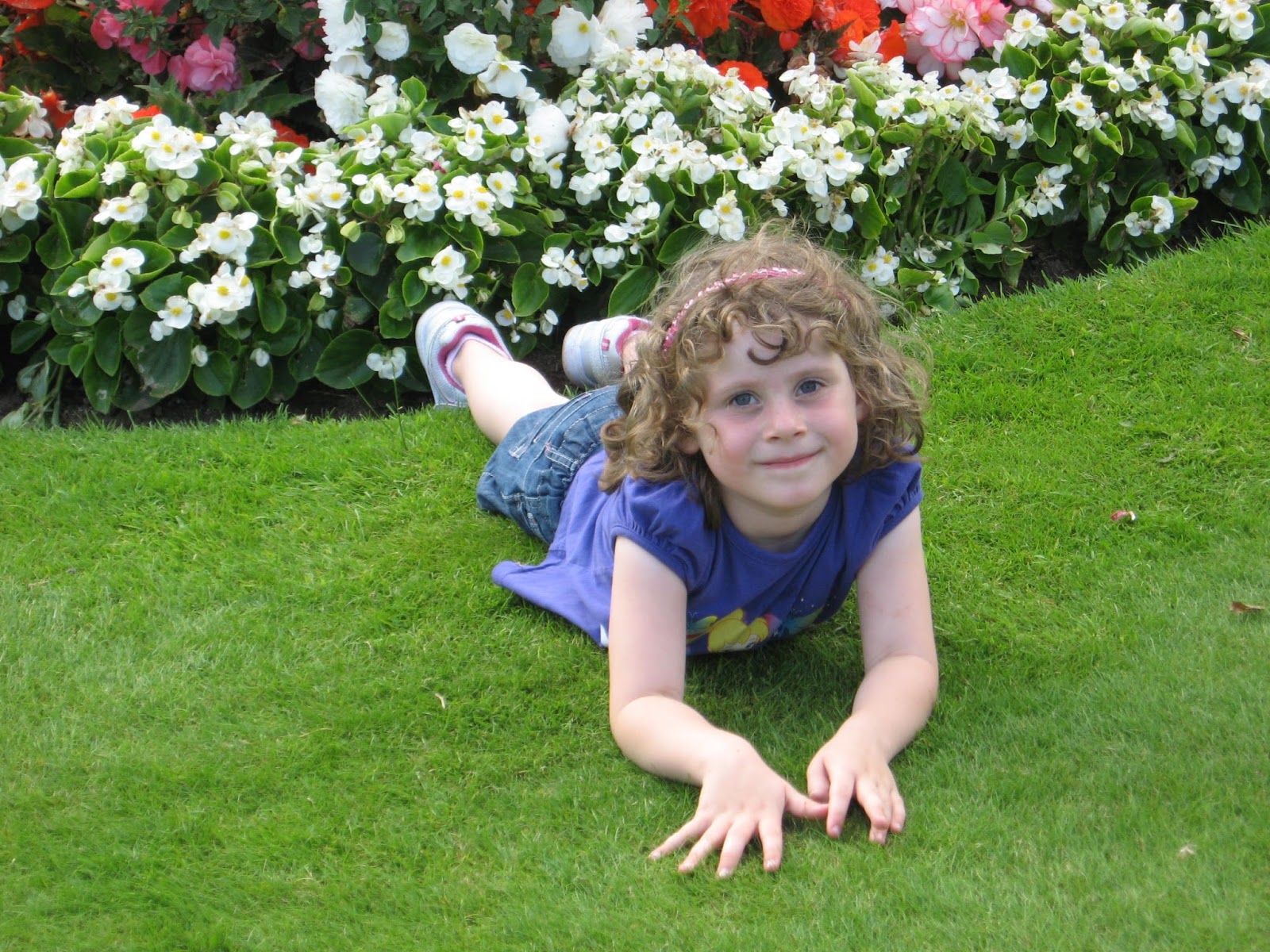 We then made a bee line for the soft play having not mentioned it to the girls until then, off came their shoes and they dived right in, along with Daddy of course. Little 1 headed straight for the balls and Little 2 dashed off to the highest point she could scale and ran around up the top. 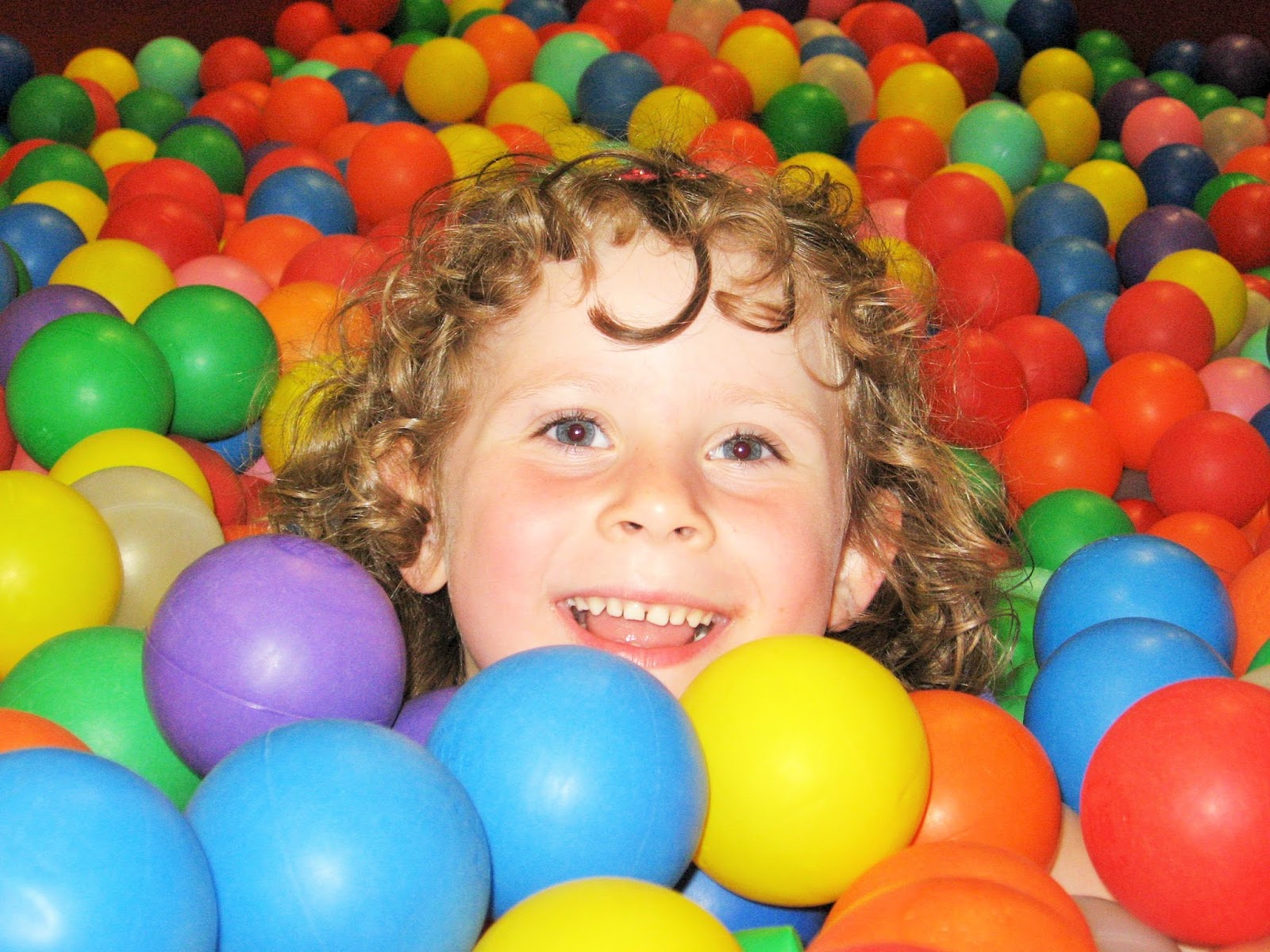 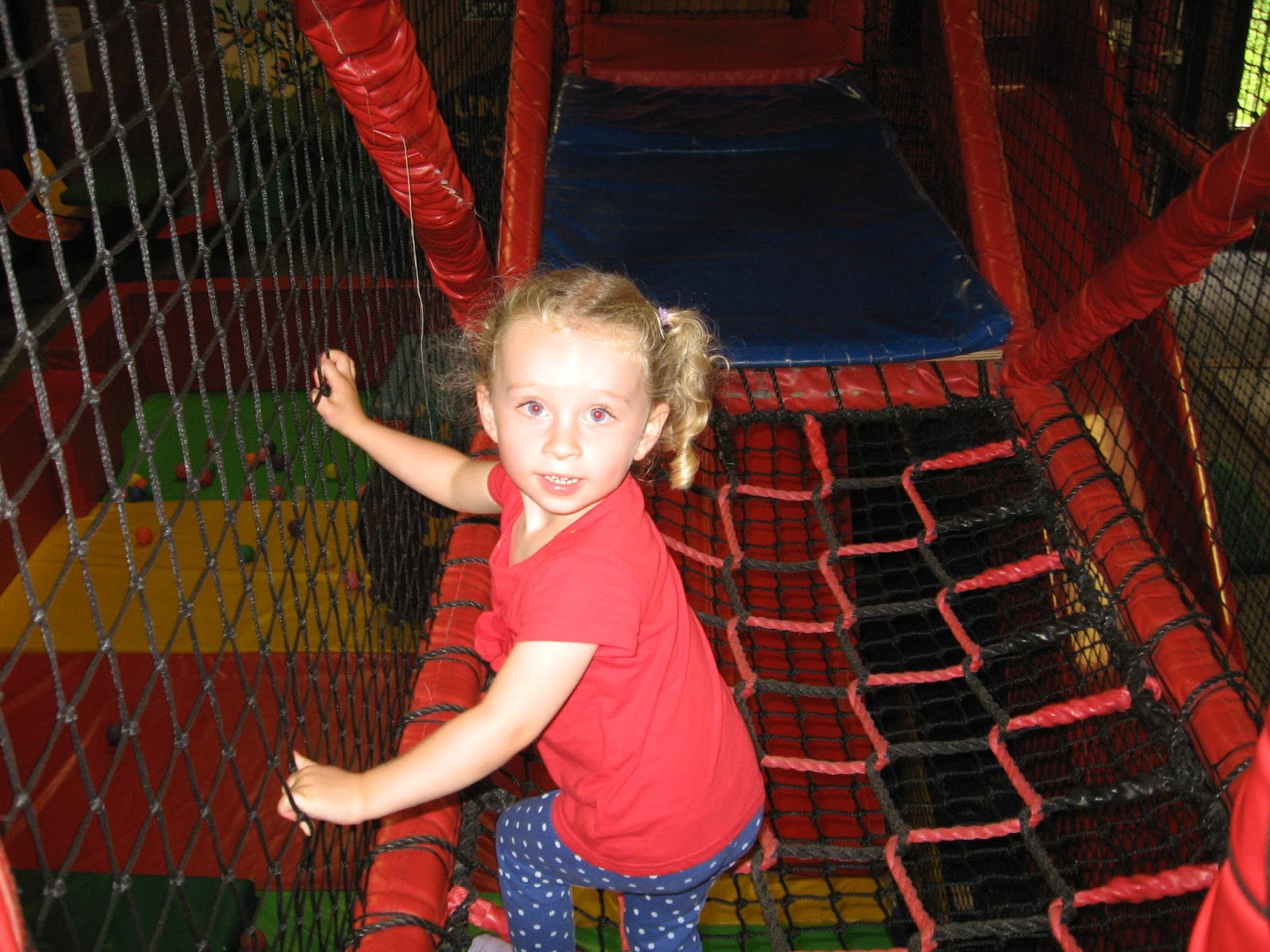 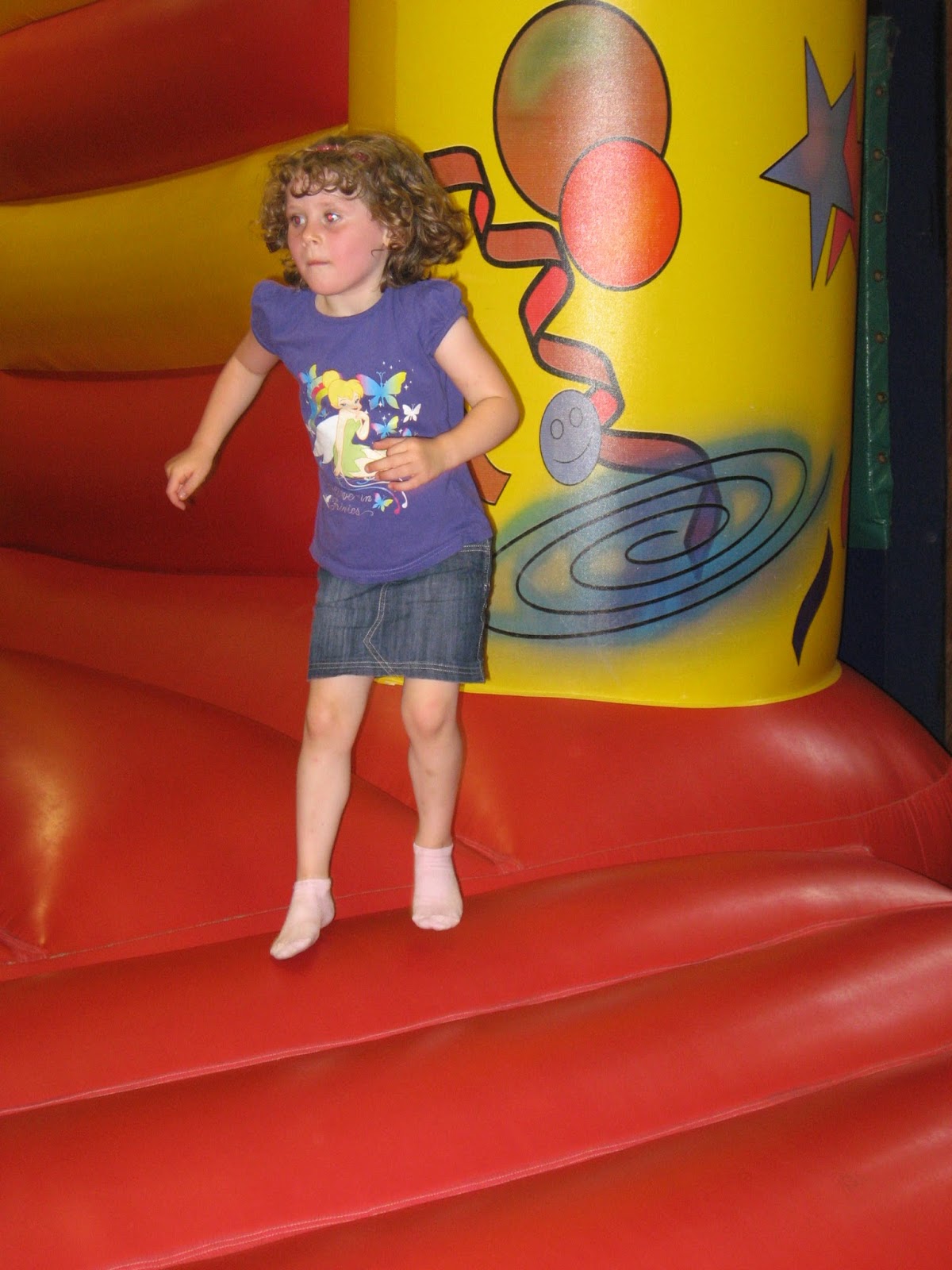 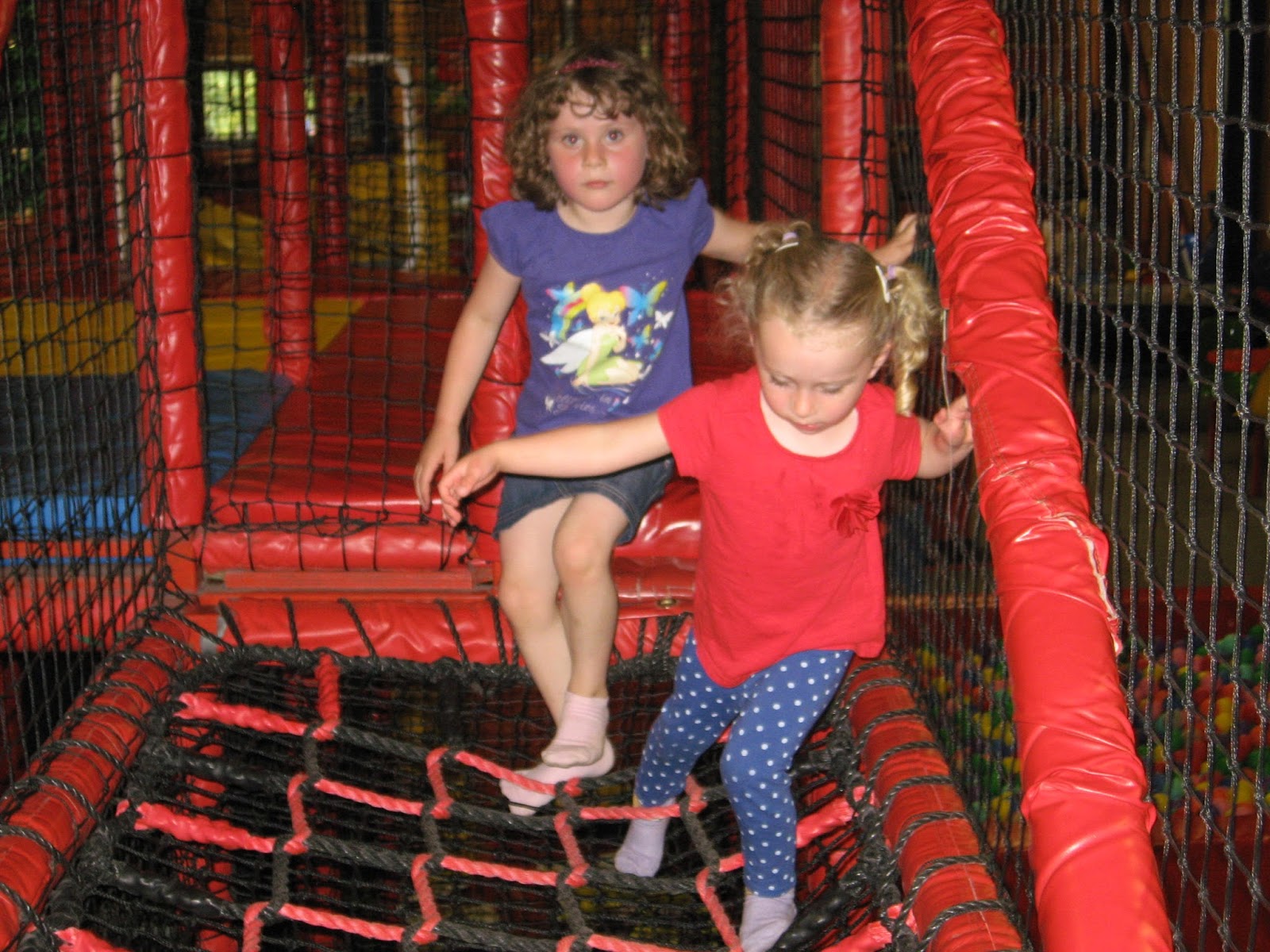 We stayed there, at the soft play until it was time to go and bundled to tired sweaty children as well as Uncle M into the car. We waved goodbye to Grandad and set off for the long trip home.
We had a fab holiday in North Devon with Granny and Grampy and a great weekend in Exmouth with family and friends. What have you done so far this summer?
at 10:37 pm
Email ThisBlogThis!Share to TwitterShare to FacebookShare to Pinterest
Labels: days out, grandad, holidays, little ones, out and about, playing, uncle