A lake, a stroll and Little 1 hand feeds the ducks

A few days ago on Nanny's day off we jumped in the car and went for a ride. We ended up at a little lake we like in a small town called Newent, there are loads of really tame ducks there and the Little ones love to feed them.

First we stopped off in a little cafe for lunch. The one we go to is just by the lake, it is lovely and friendly, the food is homemade and very reasonable, there is a Christian atmosphere and while we are not religious it does not make us feel uncomfortable being there. They have toys and a stair gate upstairs and a playhouse, sandpit and toys in the gardens too so it really is great for the Little ones, we can have an uninterrupted coffee while they play.

After our lunch and play we ventured off to the lake, bread in hand to feed the ducks. 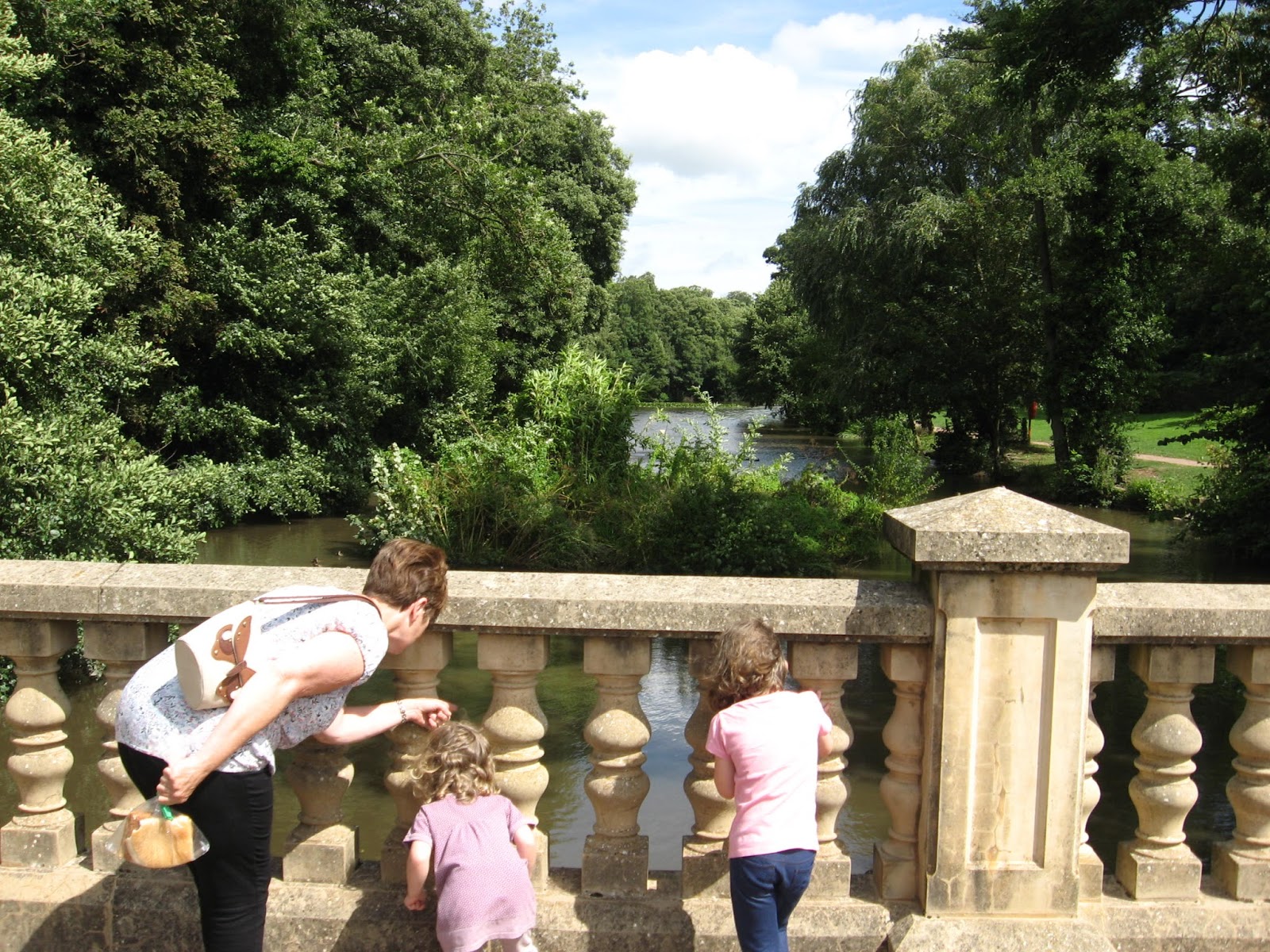 There are lots of ducks on the lake as well as giant fish, but I couldn't get any pictures of them as the water was just too muddy. The ducklings that were there last time we went have all but grown up now and it was lovely to see them in their newly emerging feathers. 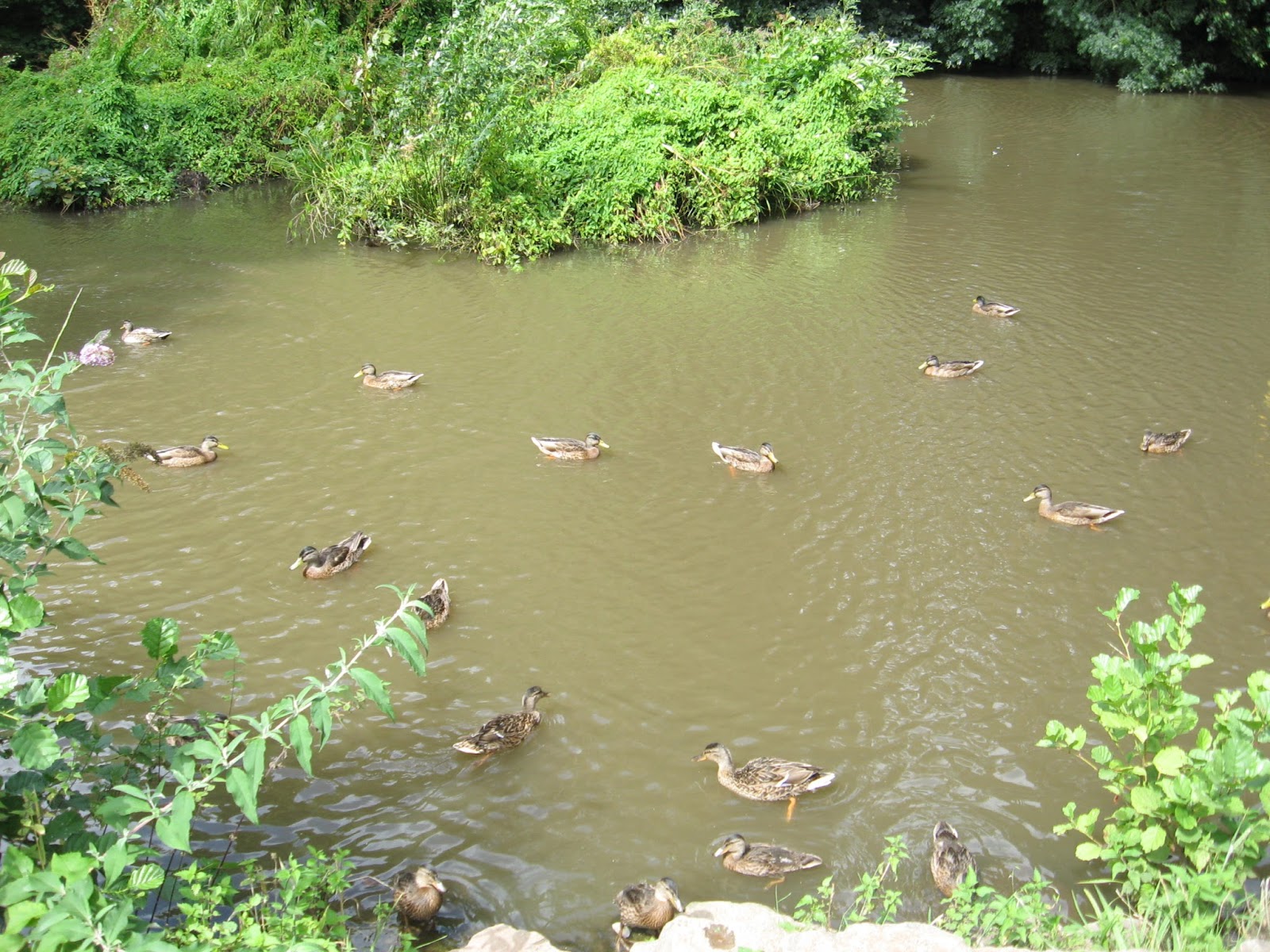 The Little ones as always were very keen to feed the ducks and they must have been very hungry as they came out of the water running up the bank towards the girls when they spotted the bread. 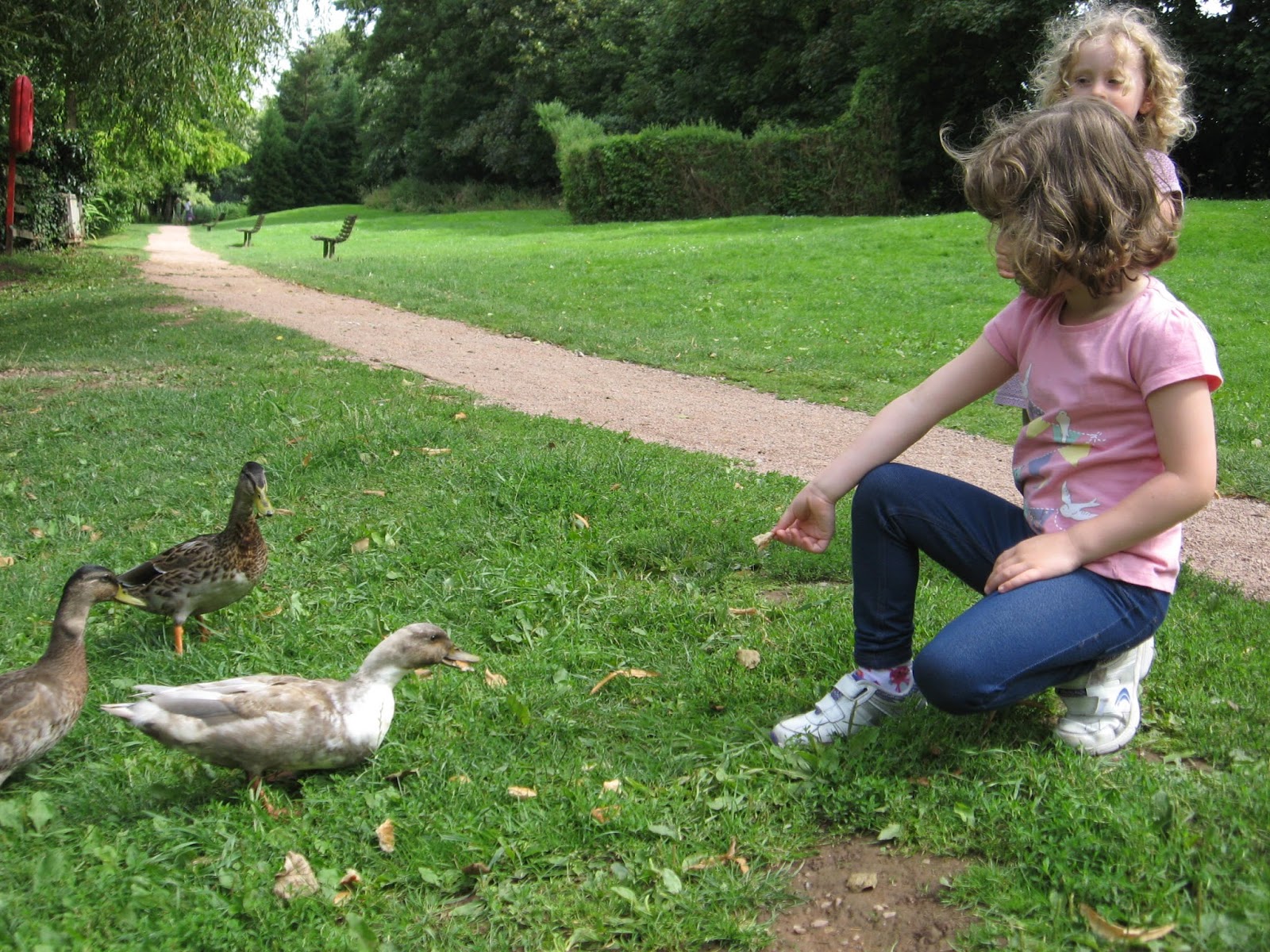 Little 1 was really brave and held out her hand with the bread, the ducks took it from her hand, I was really proud of her, she didn't flinch and was beaming, she really has grown up and become more confident in the last few weeks as before she would have run away. 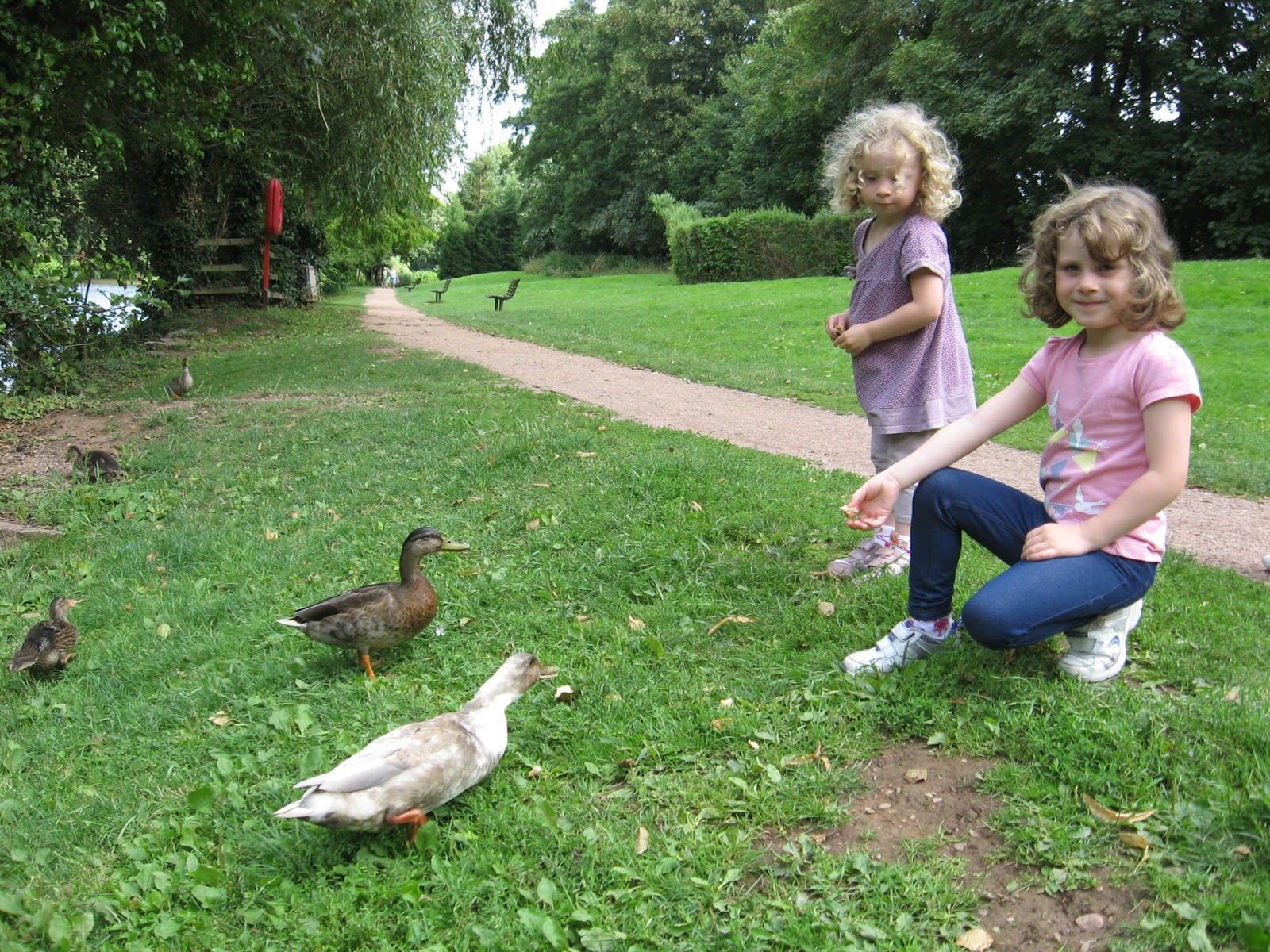 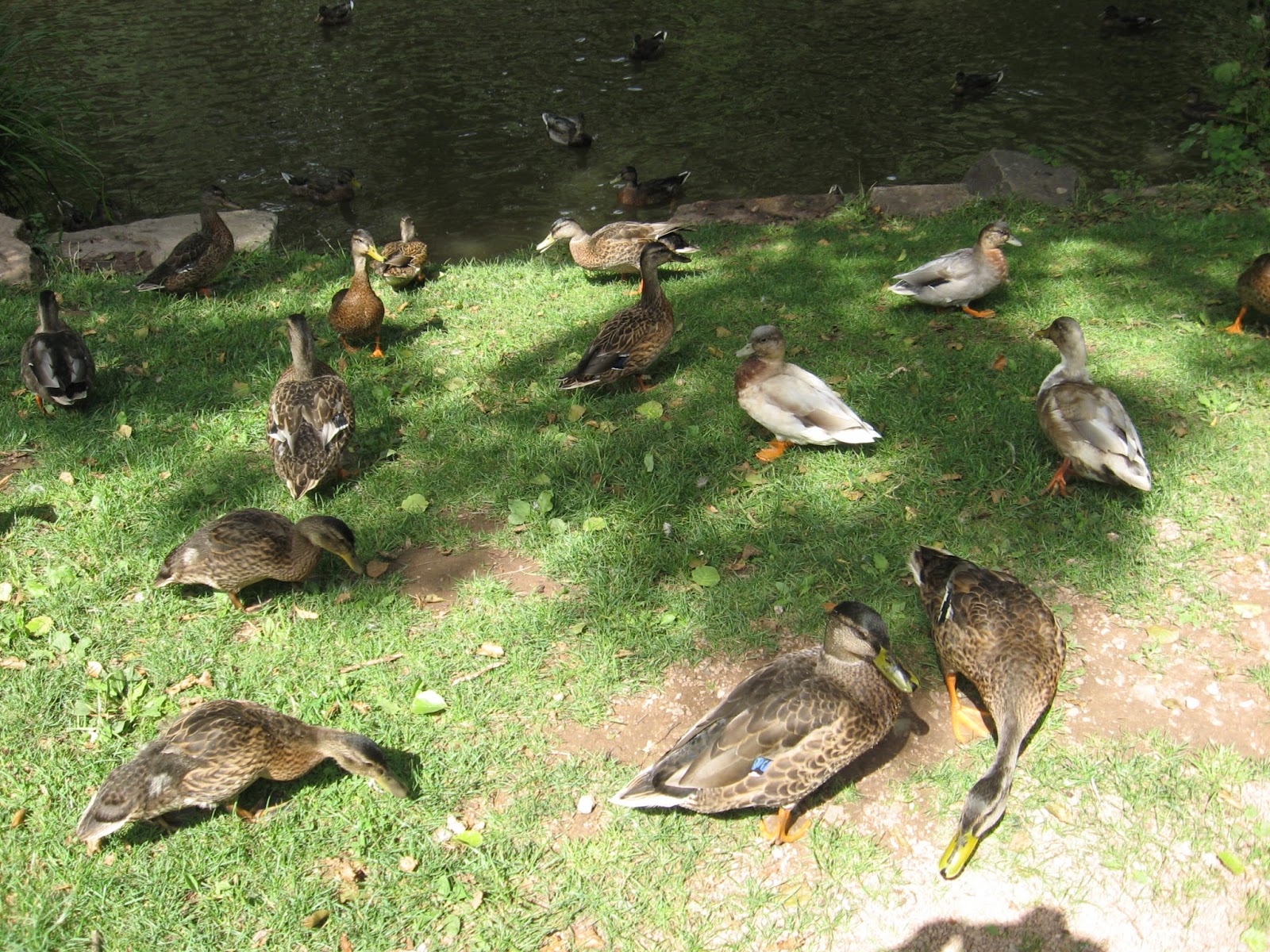 Little 2 however was a bit more cautious and hid behind her sister! 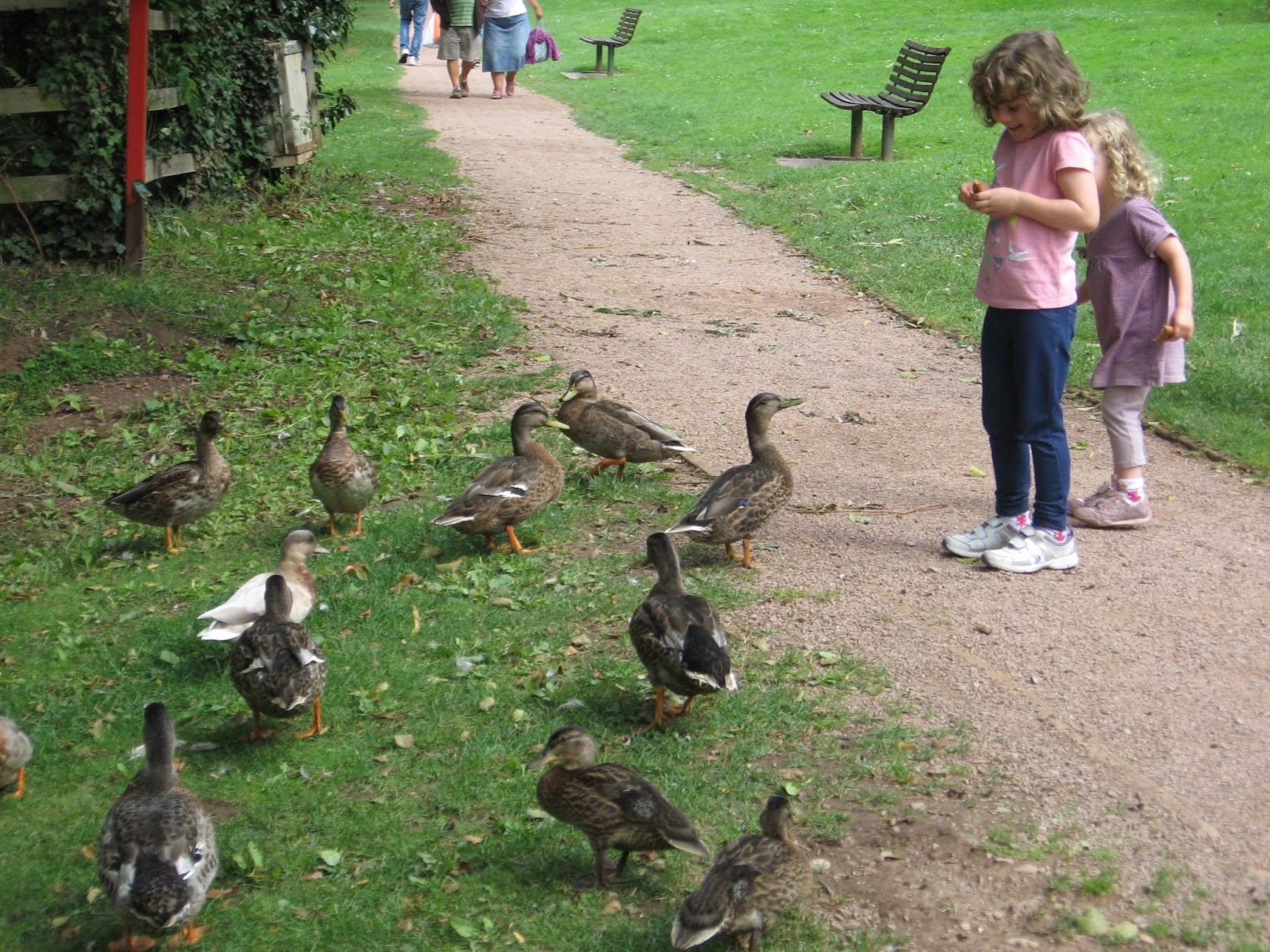 The girls wanted to have their picture taken on a bench that we had taken a picture on when we had been there previously but this time they had faces full of bread!! 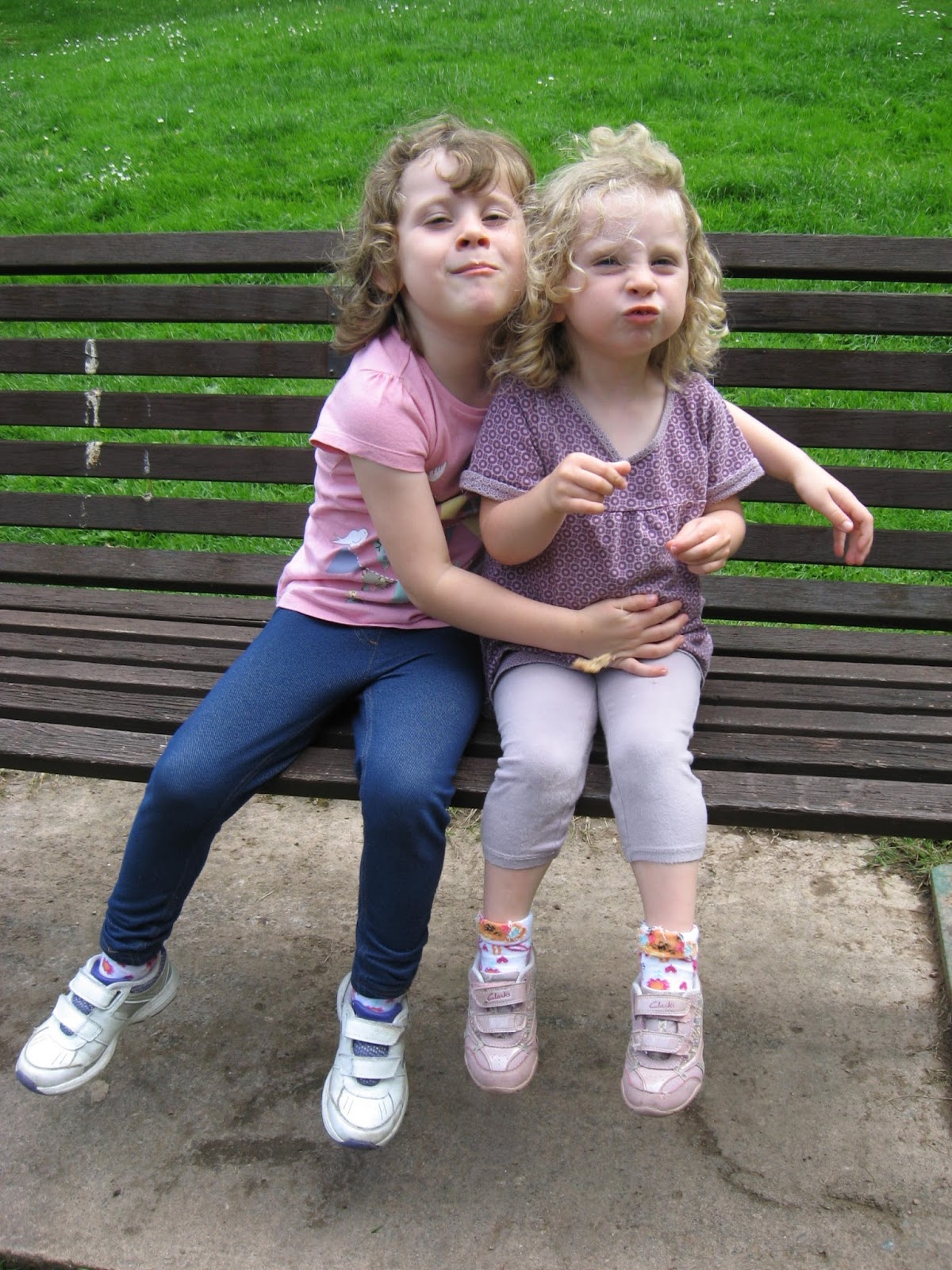 Just as we were at the farthest point of the lake the heavens opened and it started to pour with rain, we hadn't taken our coats having left them in the car as I had said 'Nah it doesn't look like it is going to rain!' oops!

We hid under the trees and spotted a heron on the lake enjoying the shower. We went for a little wander up the paths leading off the lake staying in the trees but we still got dripped on by the big drips, it was quite fun actually. 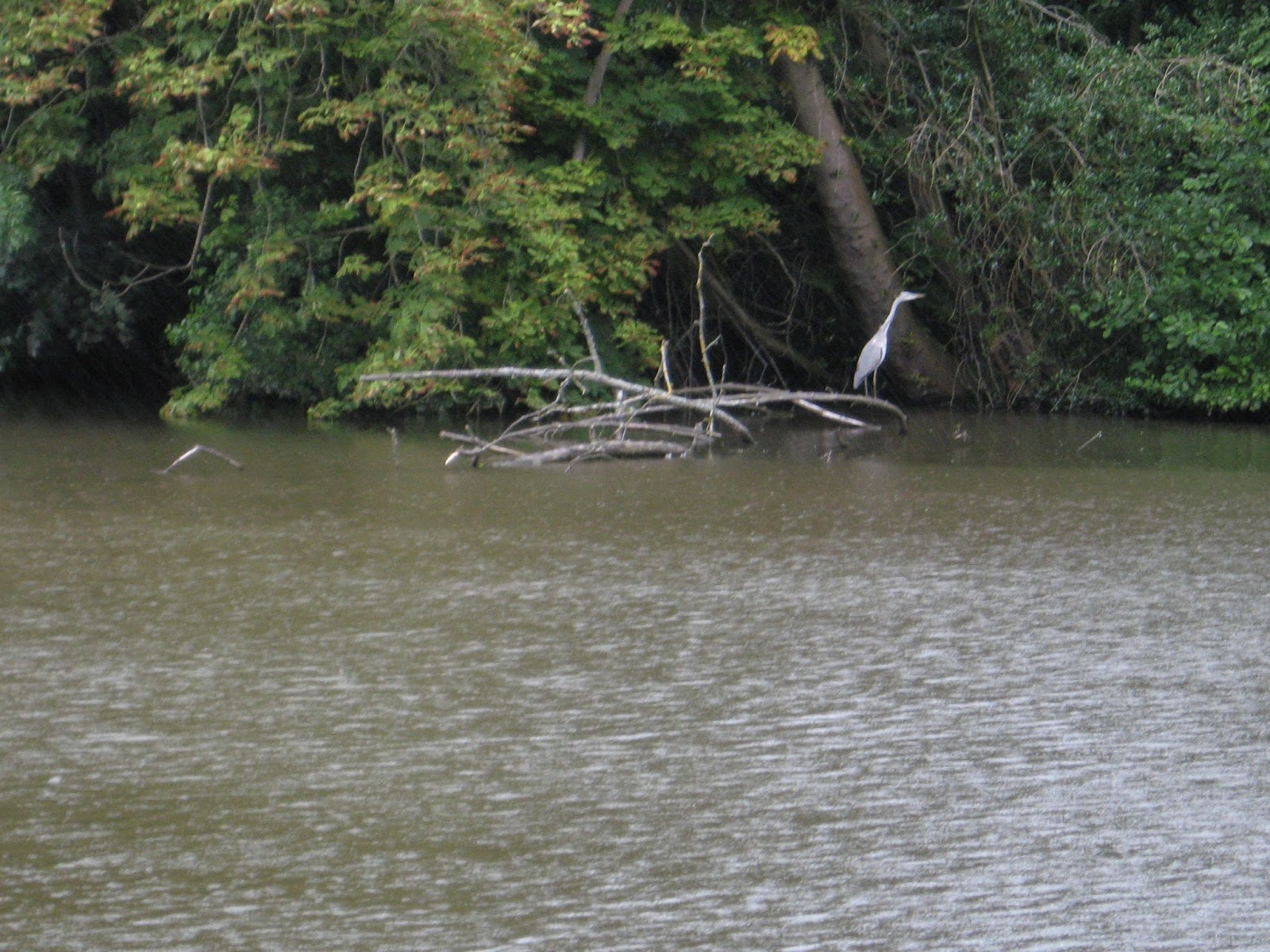 Once it had stopped raining we continued our stroll back to the car with a bit of fish spotting and balancing on logs on the way. 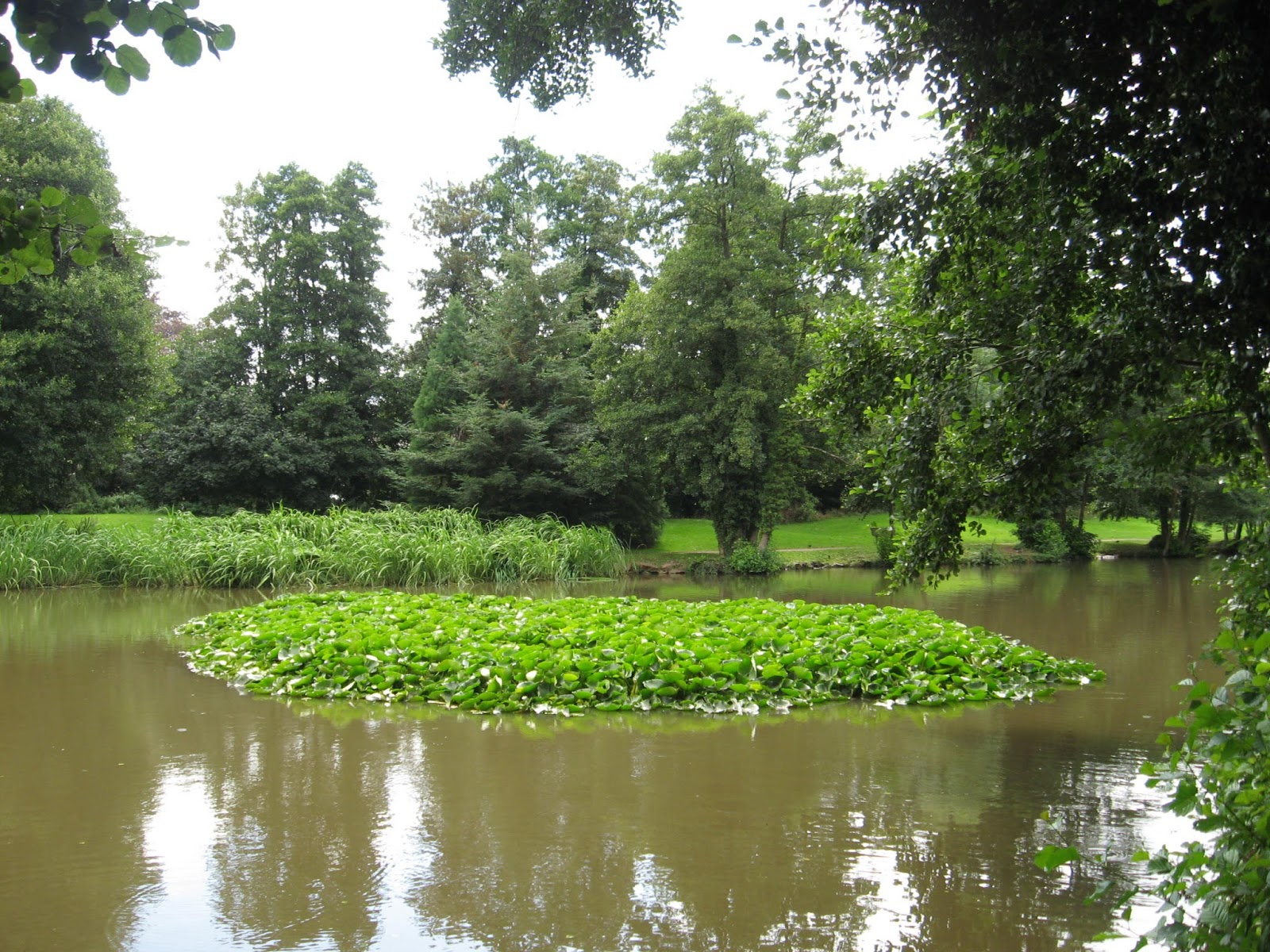 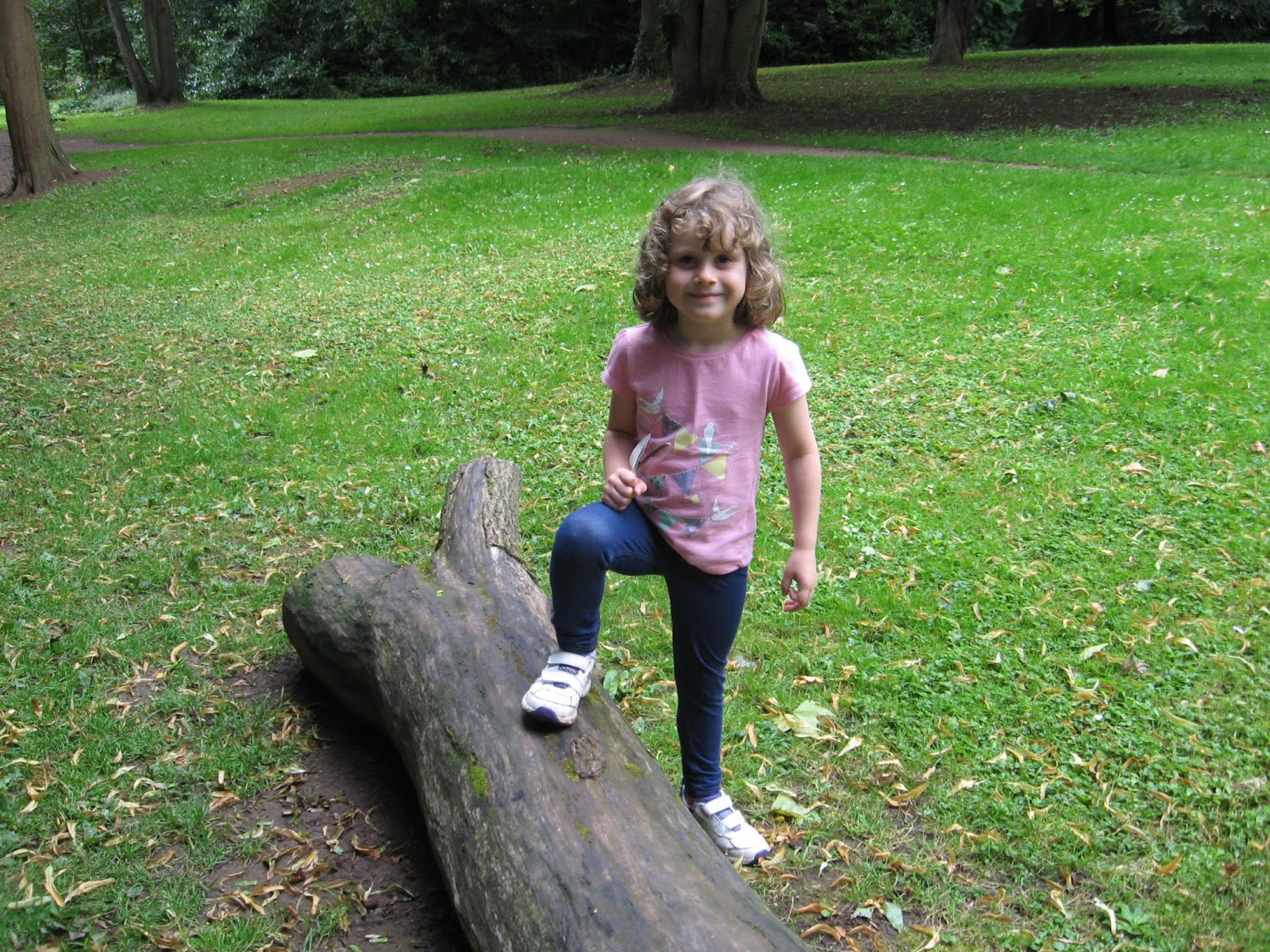 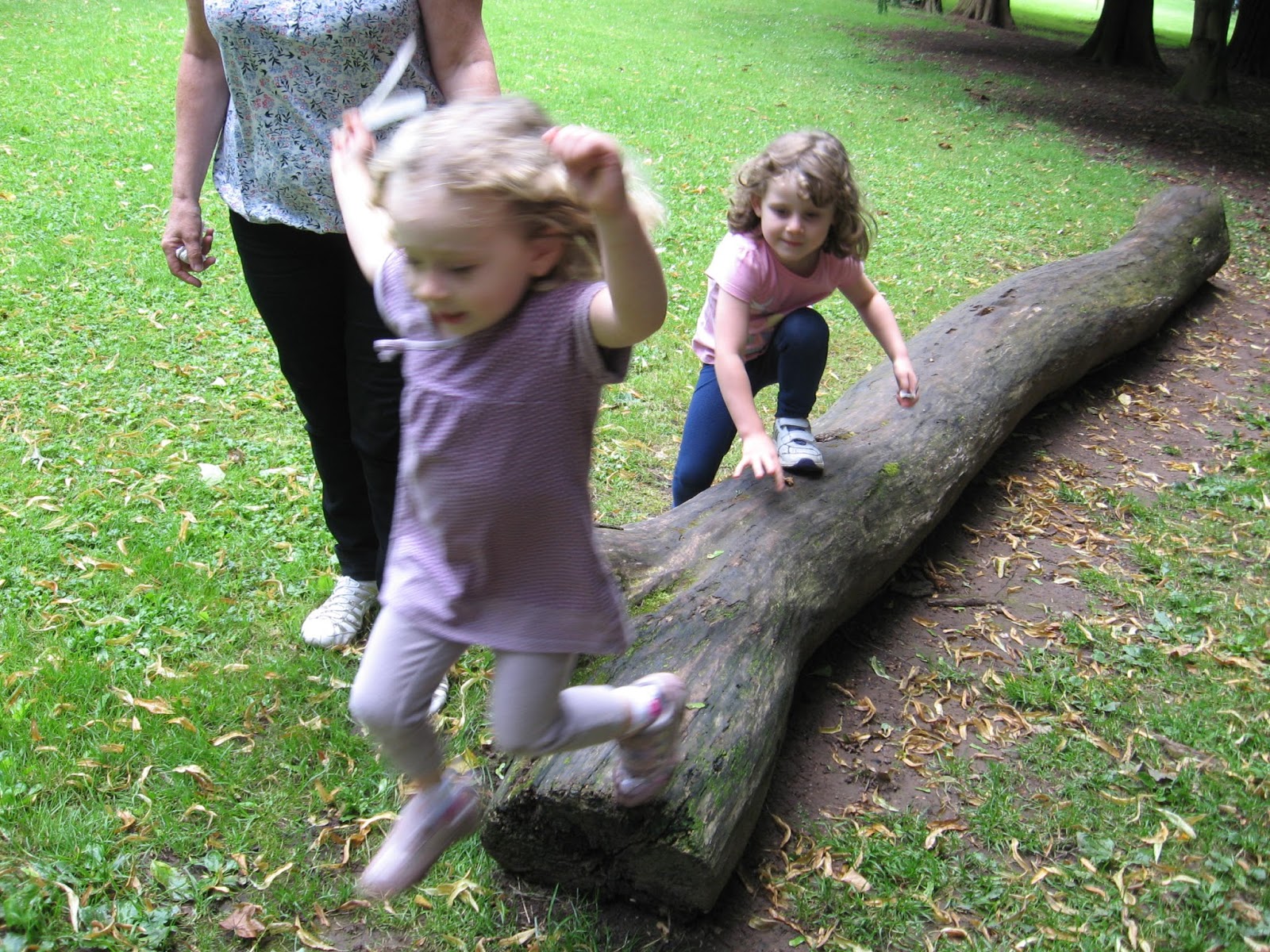 I took this picture of the girls standing on a tree stump and later when I had put it on the computer I realised just how much the girls had grown over the summer, I can't believe how tall Little 2 has gotten, it wasn't long ago that she only reached her sisters shoulder! 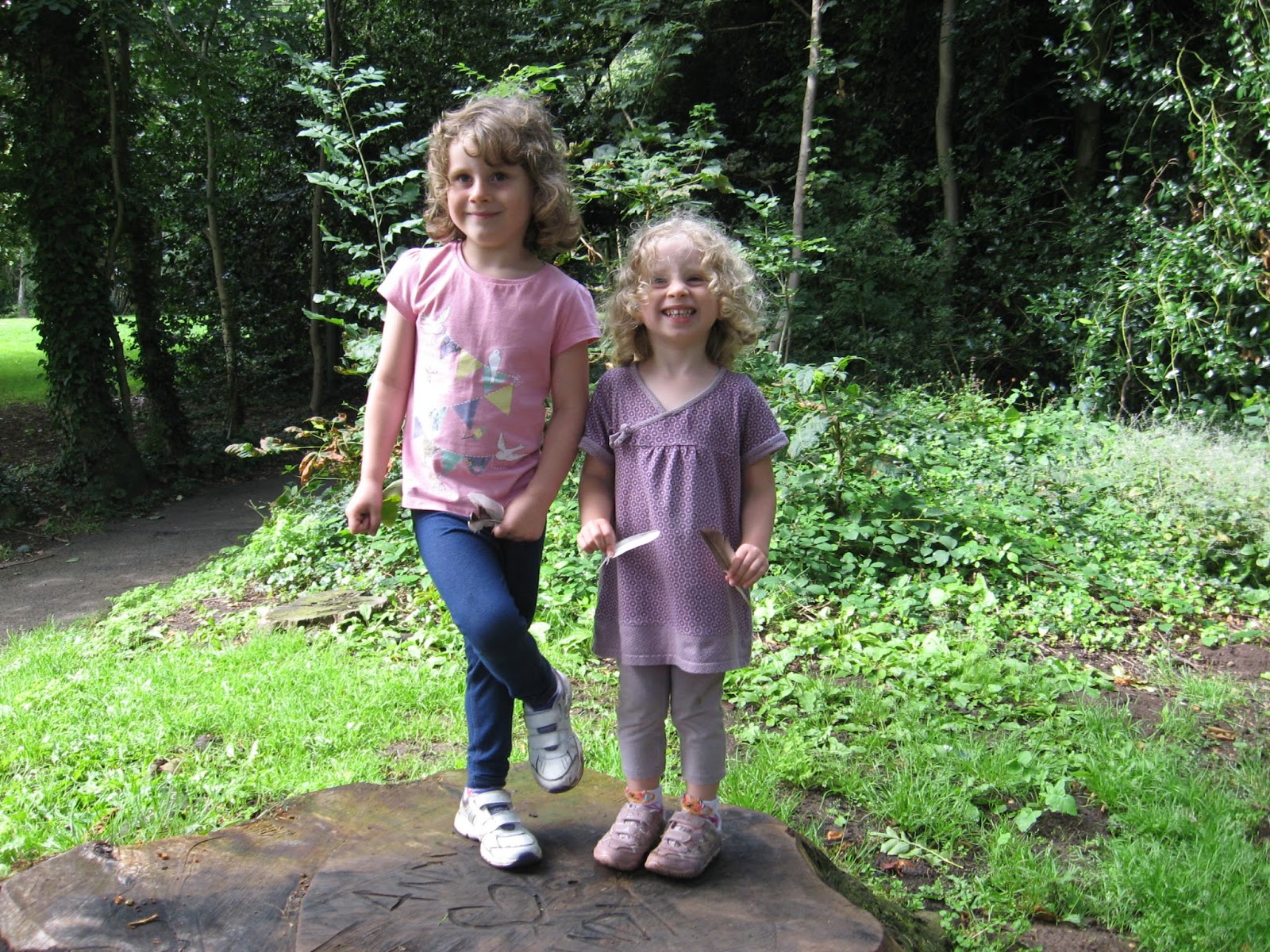 After our walk we headed to a nearby garden centre for a coffee and a play on their play area as it was raining again. We had a lovely afternoon out and despite it being a bit rainy we all got lots of fresh air and some exercise too.
at 3:31 pm
Email ThisBlogThis!Share to TwitterShare to FacebookShare to Pinterest
Labels: days out, little ones, nanny, out and about, walking