The Little ones make Lemon Jumbles

It was one of those days when we'd been out in the morning and it was a while until teatime, the girls didn't really want to play with much and flitted from one thing to another and I was a bit bored too. I realised we hadn't done any baking for a while so cracked open my beloved baking book and had a look.

I spotted a recipe for Lemon Jumbles and thought we would give them a go, we hadn't made them before. To make Lemon jumbles you will need:
100g butter, plus extra for greasing
125g caster sugar
grated rind of 1 lemon
1 egg
4 tablespoons lemon juice
350g plain flour
1 teaspoon baking powder
1 tablespoon of milk
icing sugar, for dredging

I set the girls up on the dining room table as there is more room for all of us than cramped in the kitchen, Nanny had popped round for coffee and was willing to help with the baking which I was grateful for as little 2 and baking can be rather messy! The girls each had their own bowl and I doubled the recipe above (I usually double recipes as cakes and biscuits do not last long in this house, we usually share our wares with Nanny and any visitors too).

First we prepared the baking trays and grated the lemon rind, Little 1 is a dab hand with a grater having had lots of practice recently. 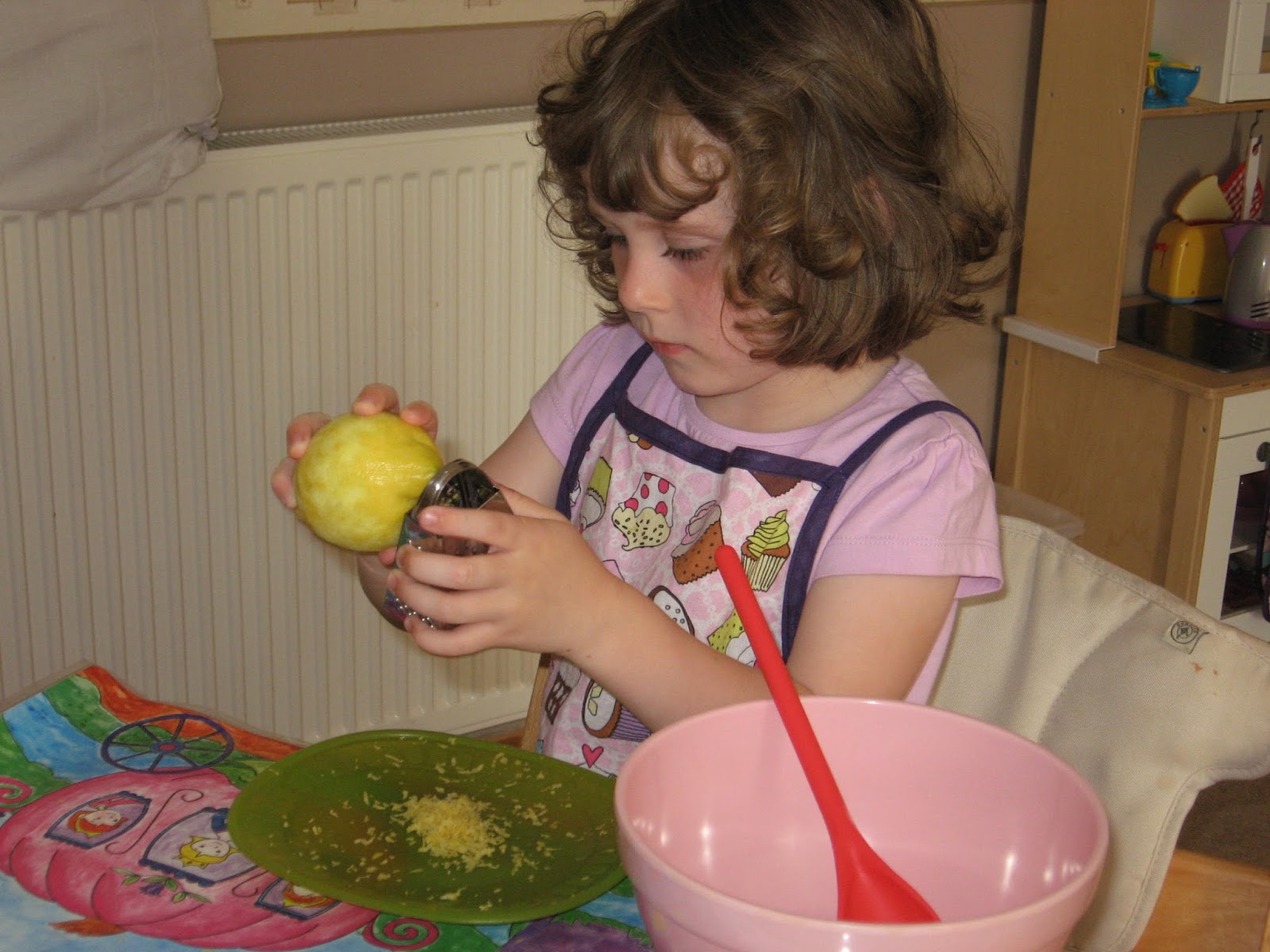 Little 2 was ready and raring to get going tapping her bowl impatiently. Next we creamed together the butter, caster sugar and lemon rind until it was light and fluffy. 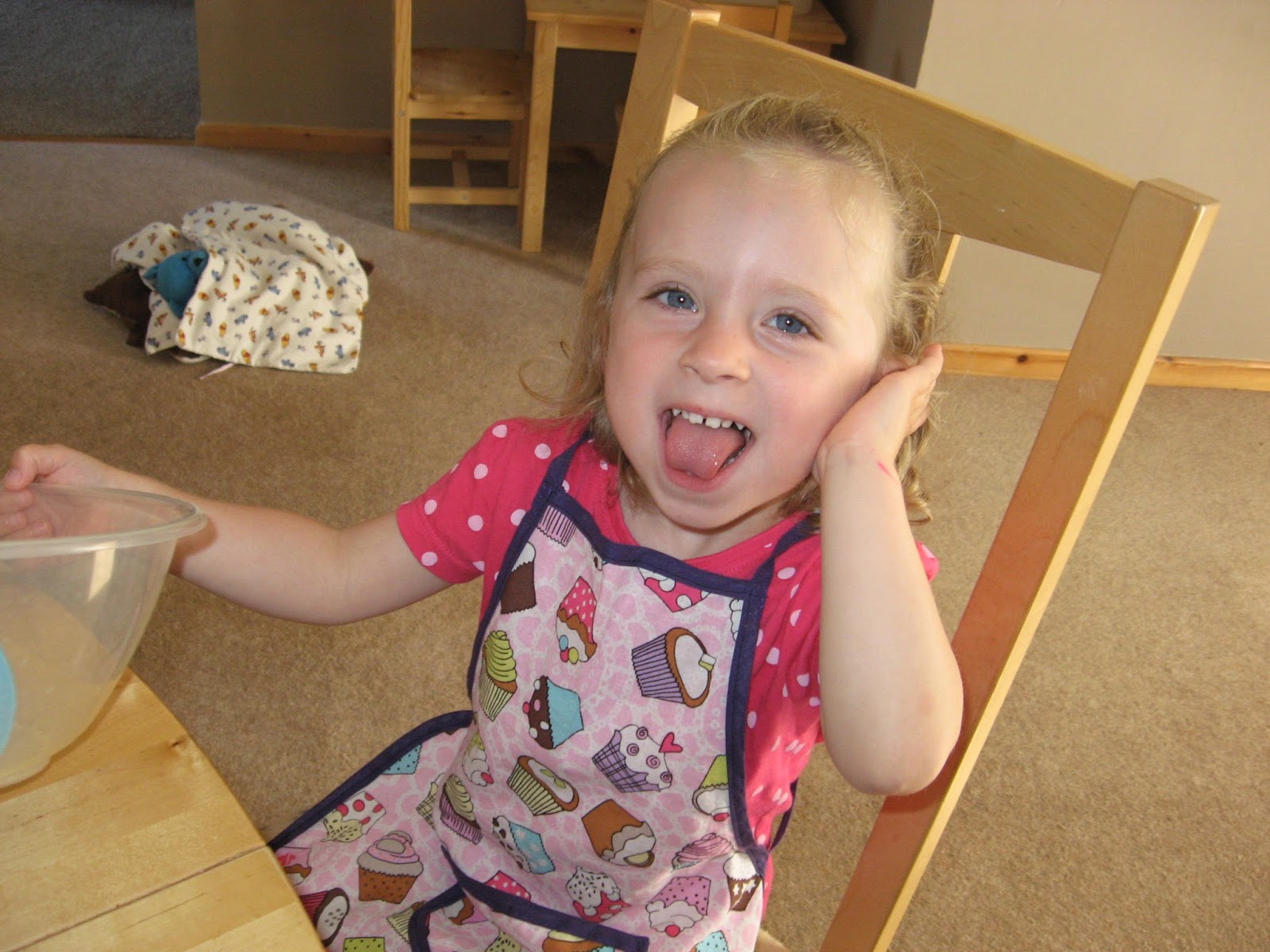 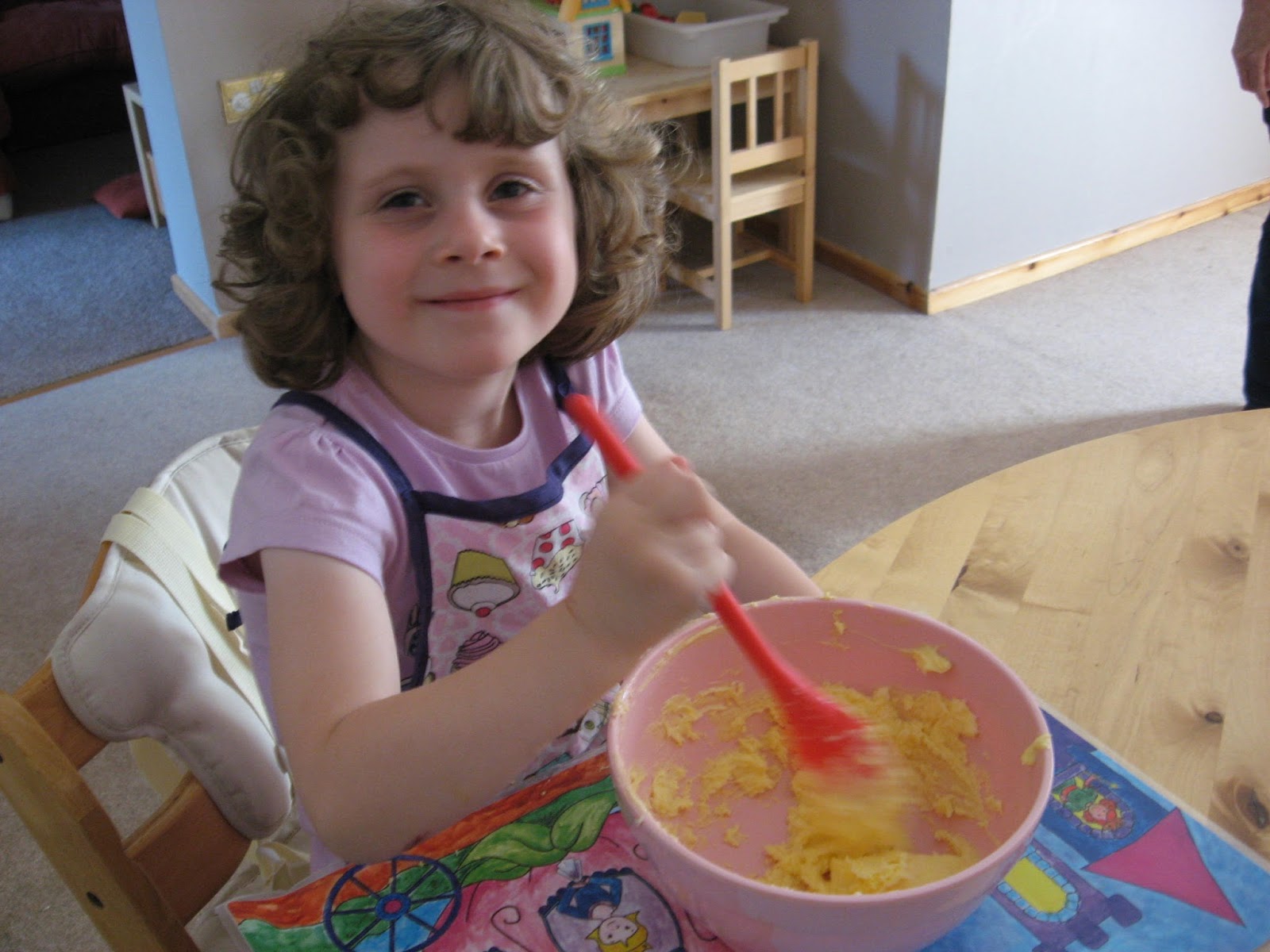 We added the beaten egg and lemon juice slowly stirring it in bit by bit, I was a bit concerned that the mixture seemed very wet but there is a lot of flour in the recipe to balance it out so I needn't have worried.

Next sieve the flour and baking powder in and stir gently, then add the tablespoon of milk. Suddenly the dough came together into a playdough like texture, it wasn't sticky like most biscuit dough and was easy to mould without making much mess. 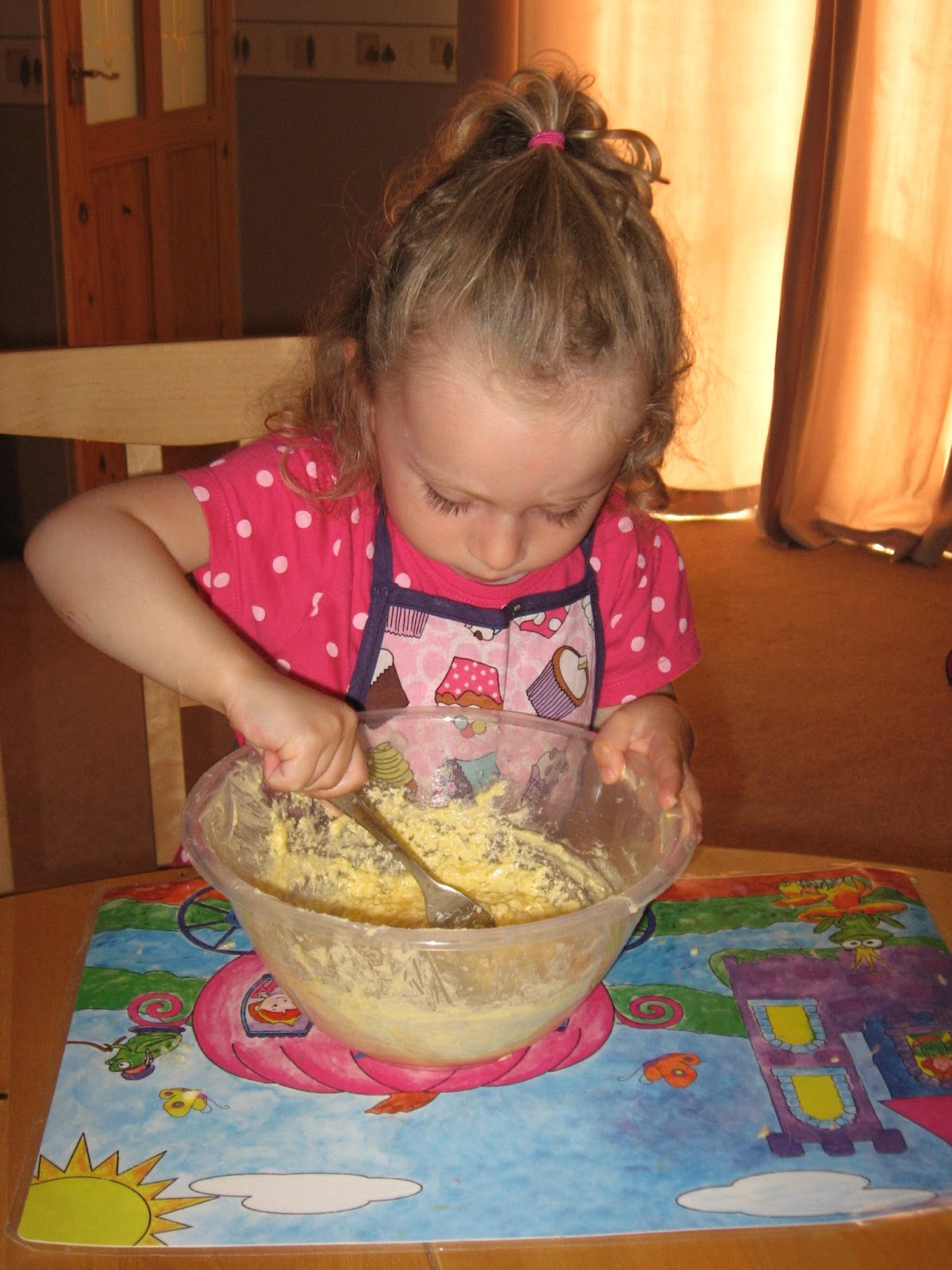 A dusting of flour on the work surface and we were ready to make our shapes. The book suggested making sausages and turning them into S shapes, but we used cutters and created all sorts of other things as well.

The dough was easy to work with and really was like playdough, it didn't stick to anything. 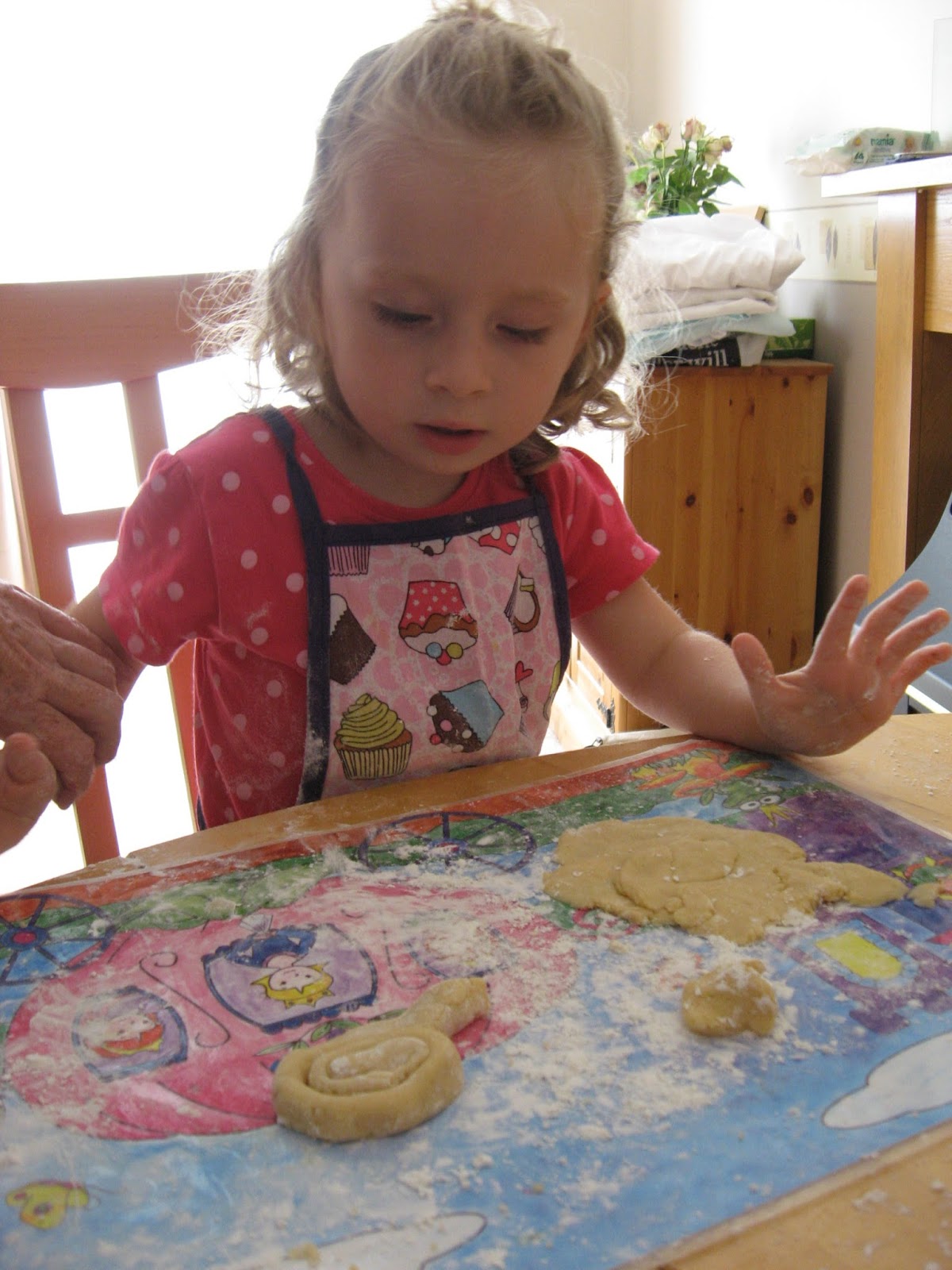 We made animal shapes, letters and numbers as well as some people and strange octopus shapes, Nanny had lots of fun getting creative with the remaining dough when the girls got bored and I was cleaning them up! 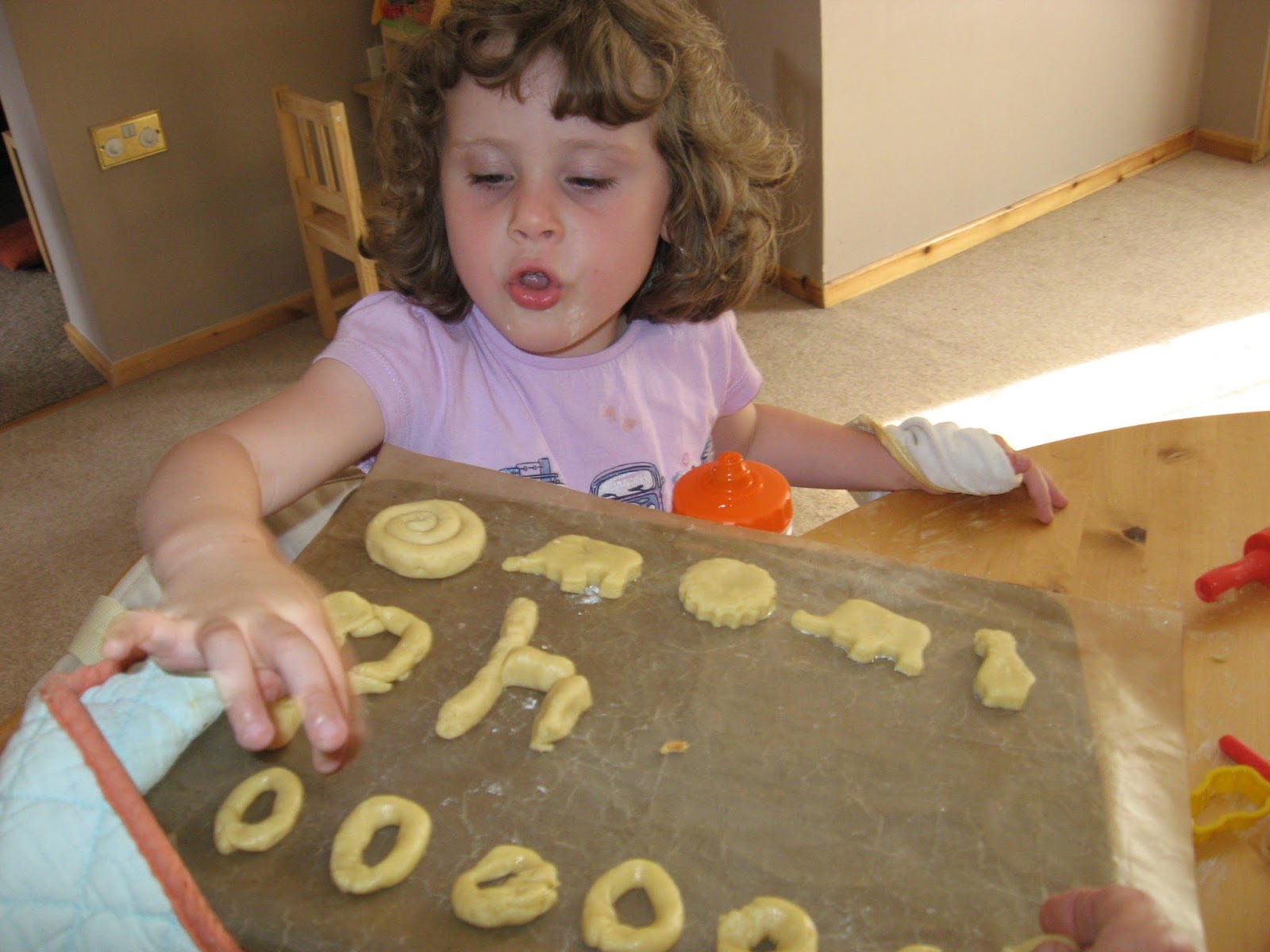 I expected the biscuits to flatten and spread out like other biscuits when they are cooking but these didn't, we put them in the oven for 10-15 minutes on 170 degrees and took them out as soon as they were beginning to turn brown. They had risen slightly but kept their shapes which was good. 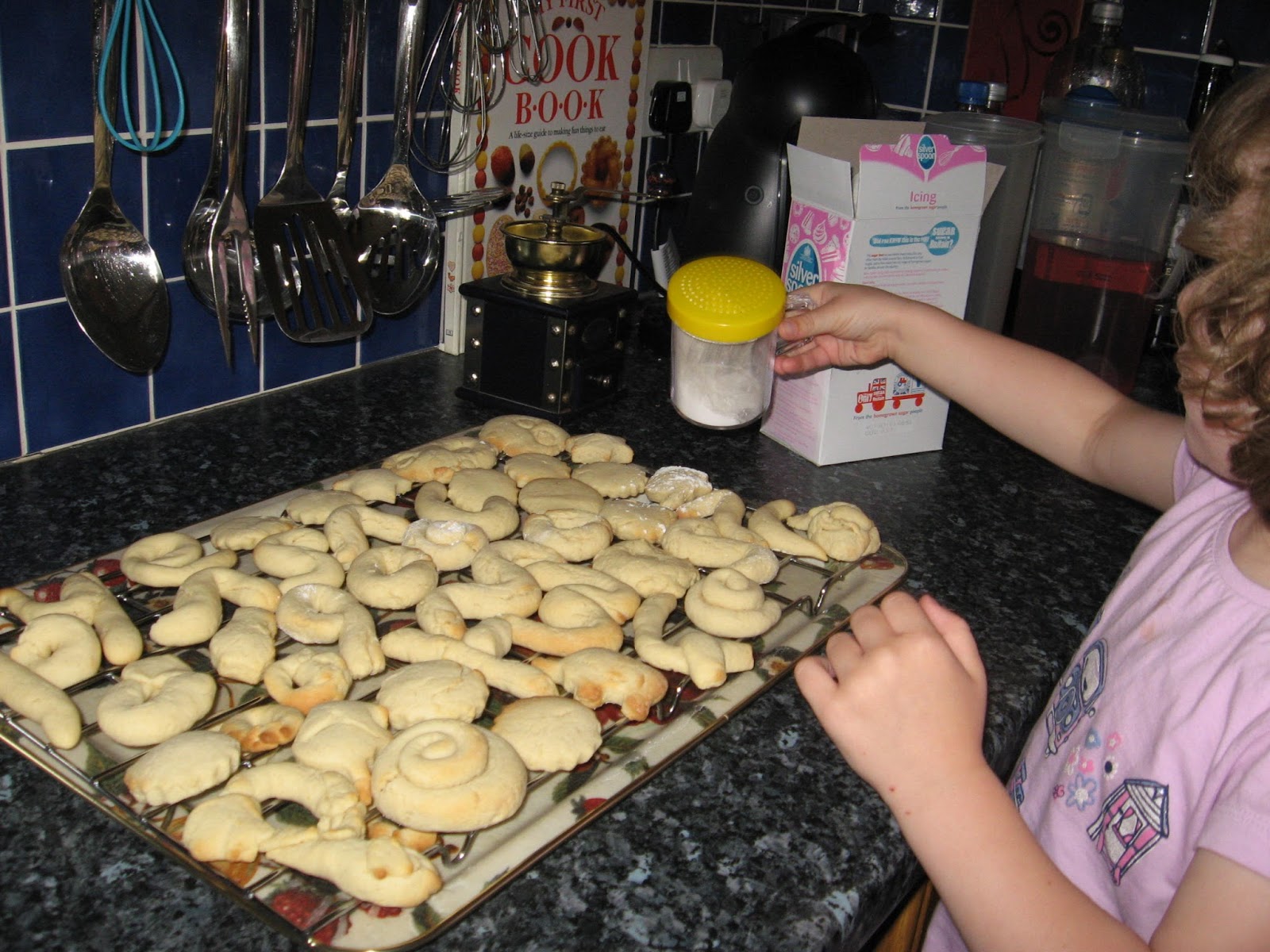 The final thing to do once they had cooled was give them a generous dusting of icing sugar.

They have a strange texture and are not like any other biscuits I have made before, they have a kind of scone like texture, soft and fluffy with a lemon zing, I have to admit I haven't eaten many as I'm not that fussed. Little 1 and Daddy love them, they have been having them in their lunch boxes. Little 2 has tried a few and comes back with the same verdict each time ' I don't like it, its gusting!' (Yes, she got that from me telling her big sister that it is disgusting to pick her nose!)

There was a recipe for citrus biscuits in the book too with a slightly different recipe I think we might give that one a go soon. 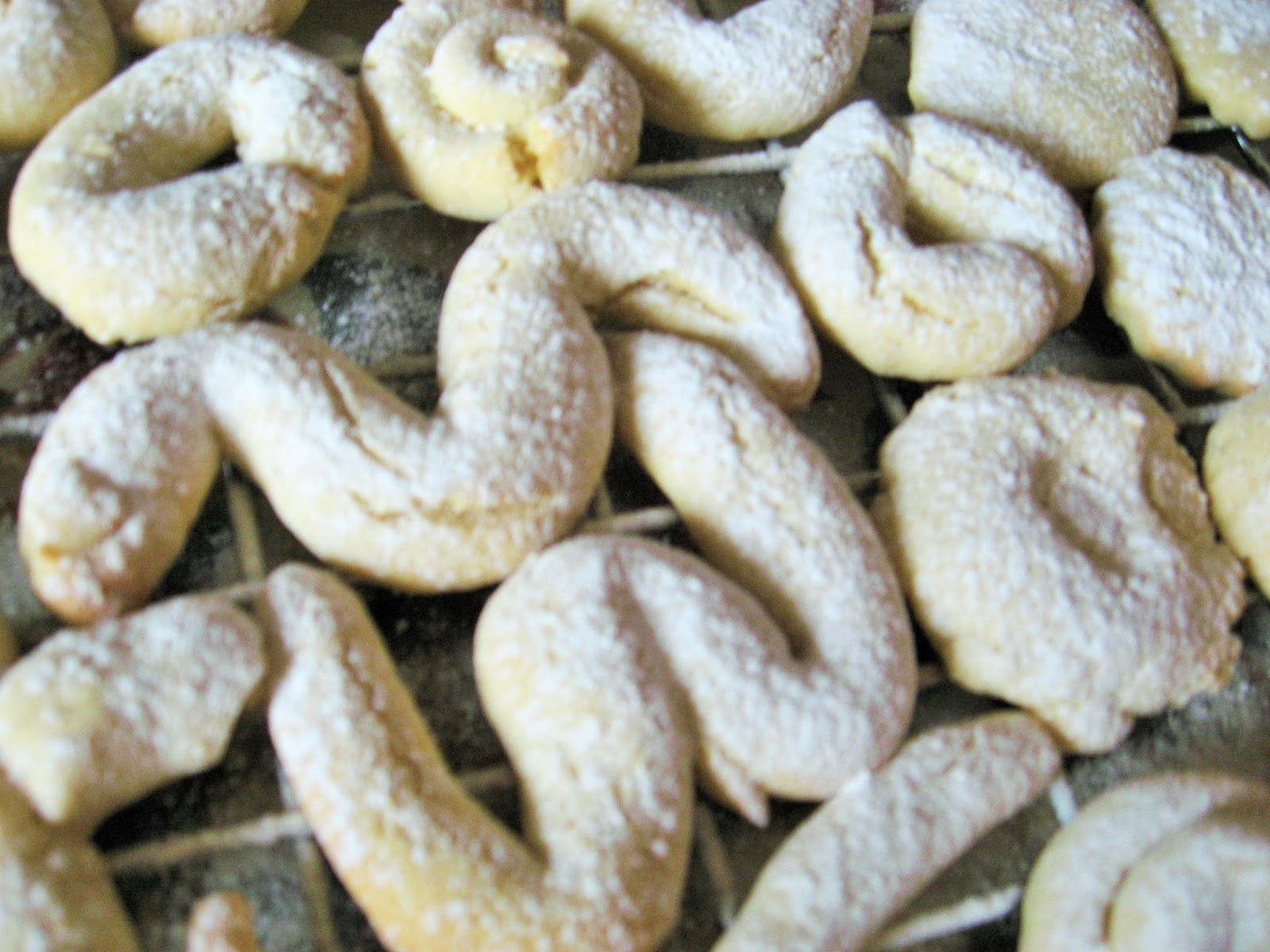 at 6:00 am
Email ThisBlogThis!Share to TwitterShare to FacebookShare to Pinterest
Labels: baking, helping, little ones, mummy, nanny