Having a 4 year old sister means that Little 2 has access to a larger age range of toys than her sister did at the same age, we have things from well loved musical baby phones and a walker that looks like a pushchair that they still play with daily right up to playmobil sets with tiny bits and a lego treehouse. Given the choice of what to play with Little 2 tends to shun the toddler toys and play with the playmobil or marble run for hours on end (supervised of course).

She also plays really well with Little 1 for her age, her attention span and understanding of the rules and complexities of her elder sister's games don't seem to faze her and they will play at having picnics and mummies and babies for hours with just the odd brief squabble.

Recently Little 1 has been spending a little more time away from home doing some settling sessions at big school (!), Little 2 has had more time alone with me and has shown renewed interest in the toddler toys we have. The Happyland house has seen more action this week than it has in months and the wooden blocks have ventured out on several occasions too. 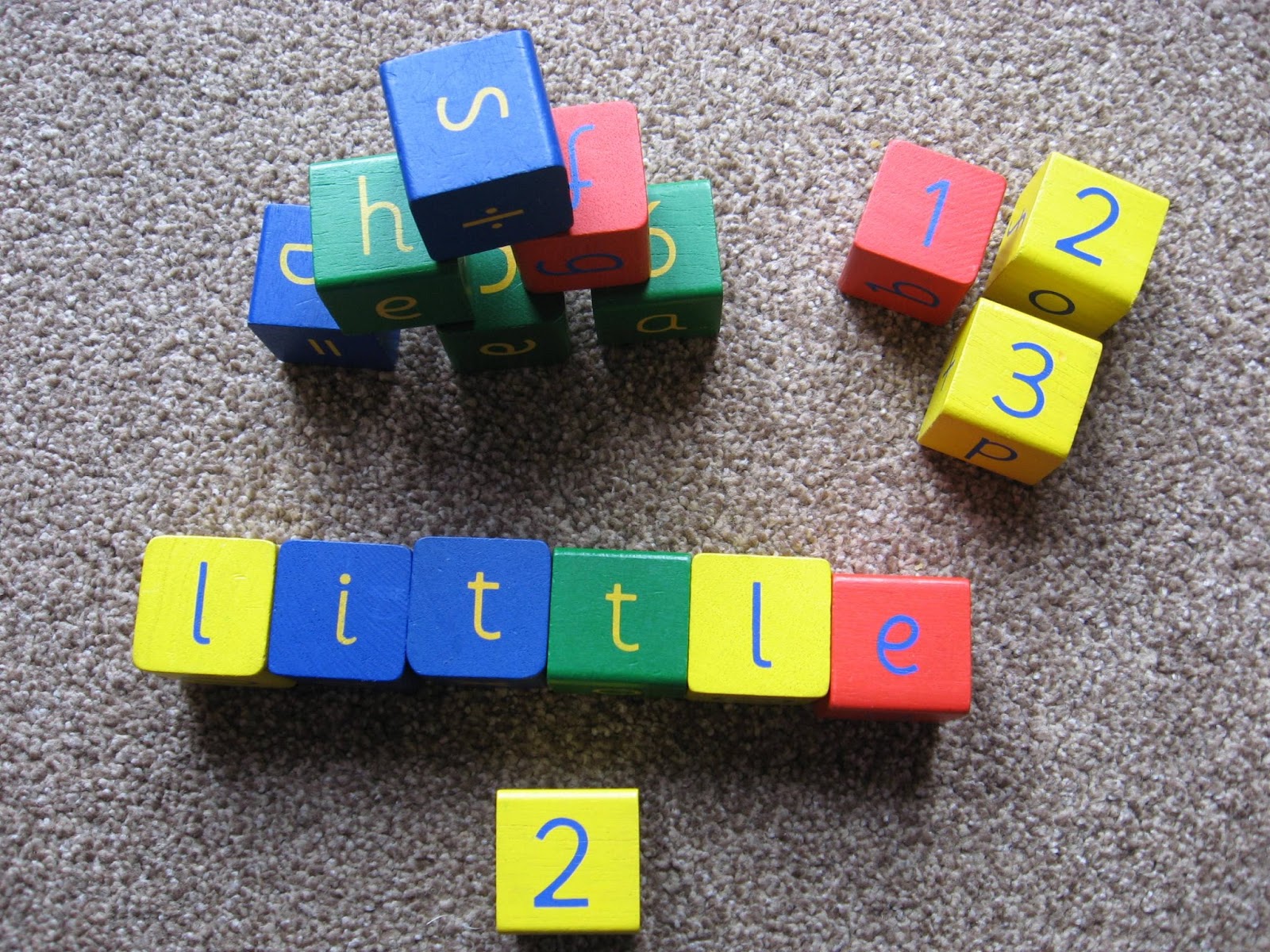 Little 2 got out the blocks today while I was pottering, I watched her for a while talking to herself about the colours and spouting random phonics while looking at the letters (Little 1 has begun to read simple words and is always asking how to spell things so phonics are often being spoken in our house at the moment). 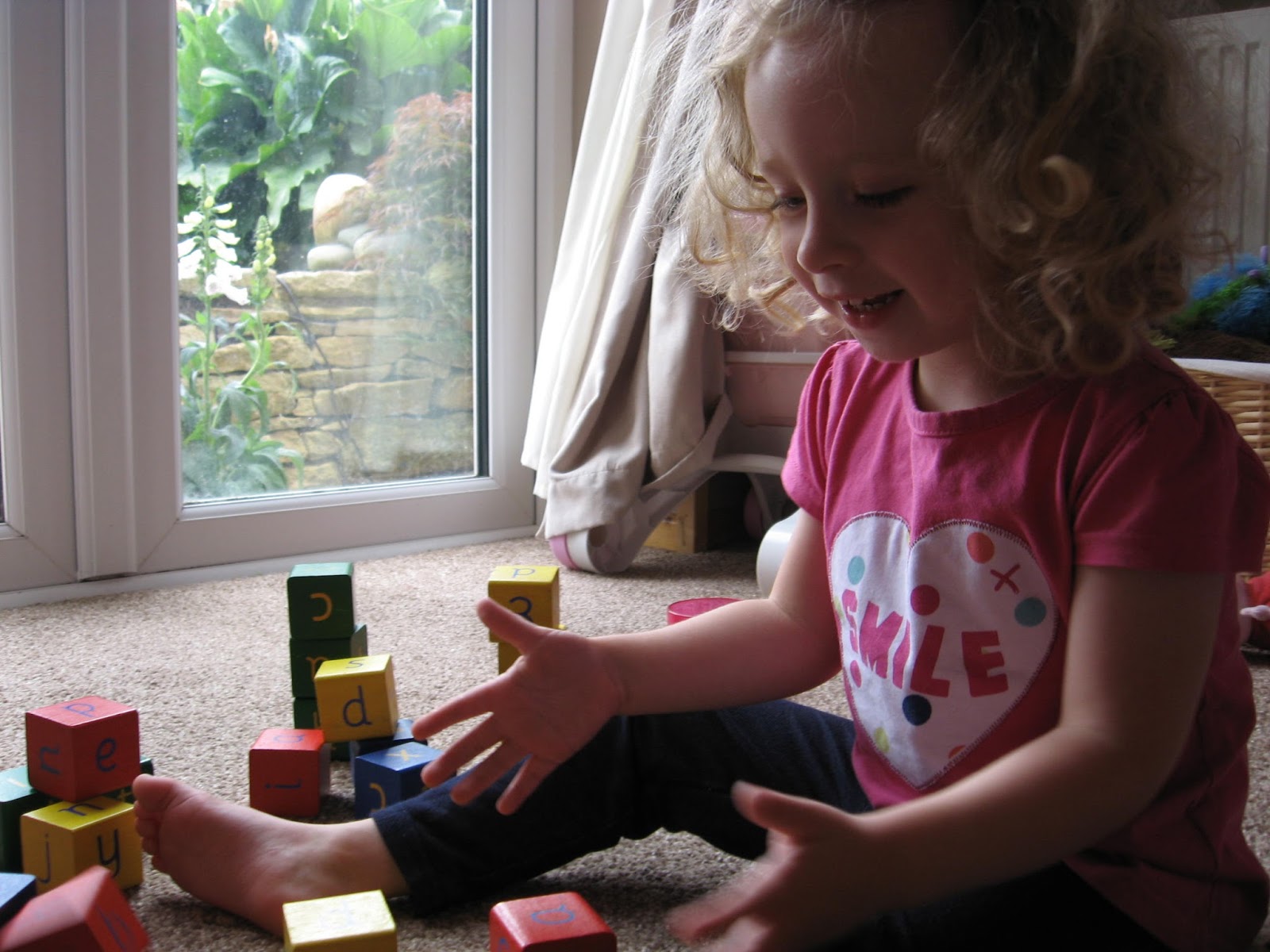 I joined her and helped her to find the letters of her name and pointed out a few numbers then we moved on to building and knocking down towers and sorting colours. 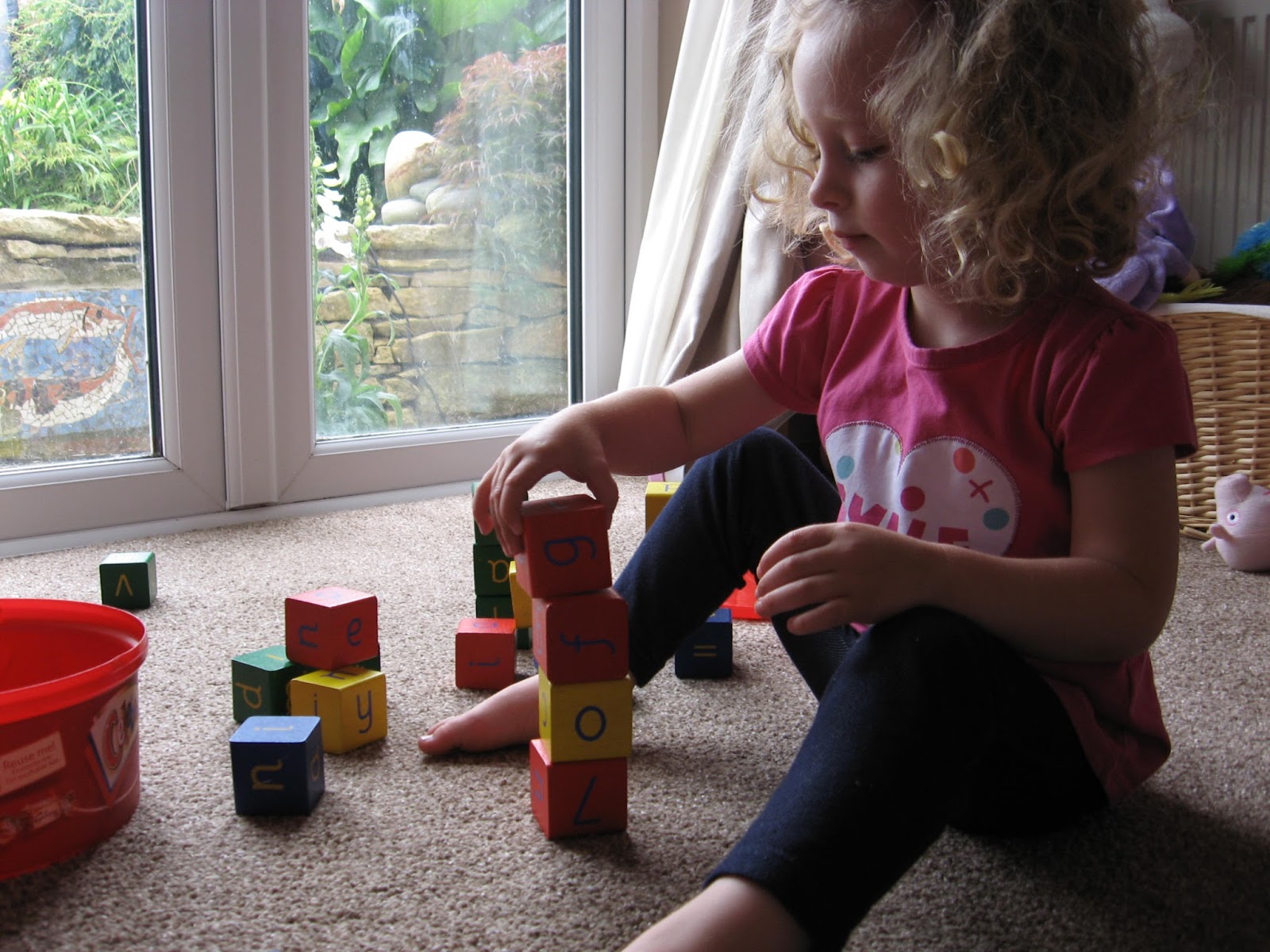 She told me she was building a castle to live in, a pink princess castle and that me, Daddy and Little 1 could all come and live with her there, don't you just love the innocence of childhood. 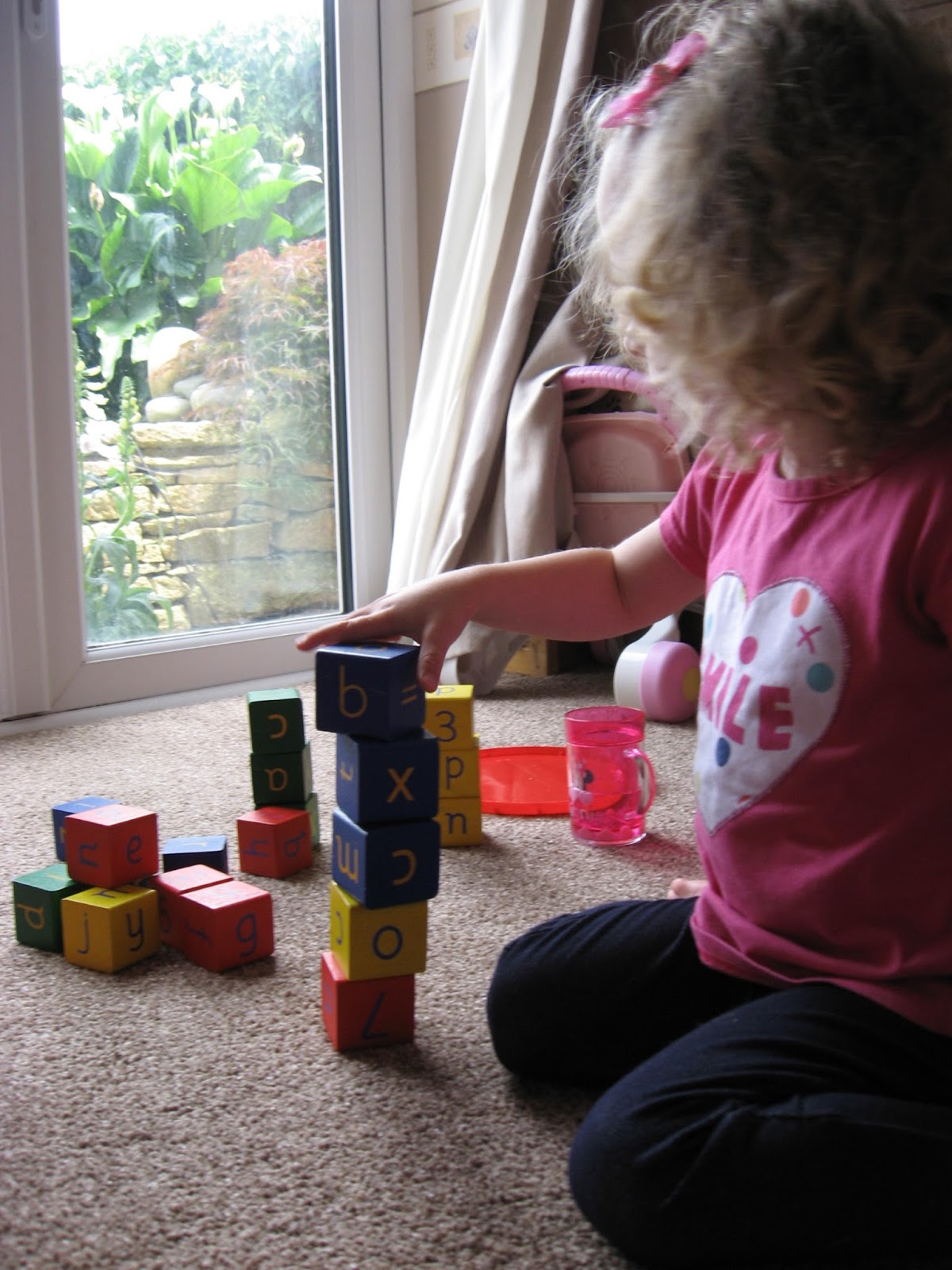 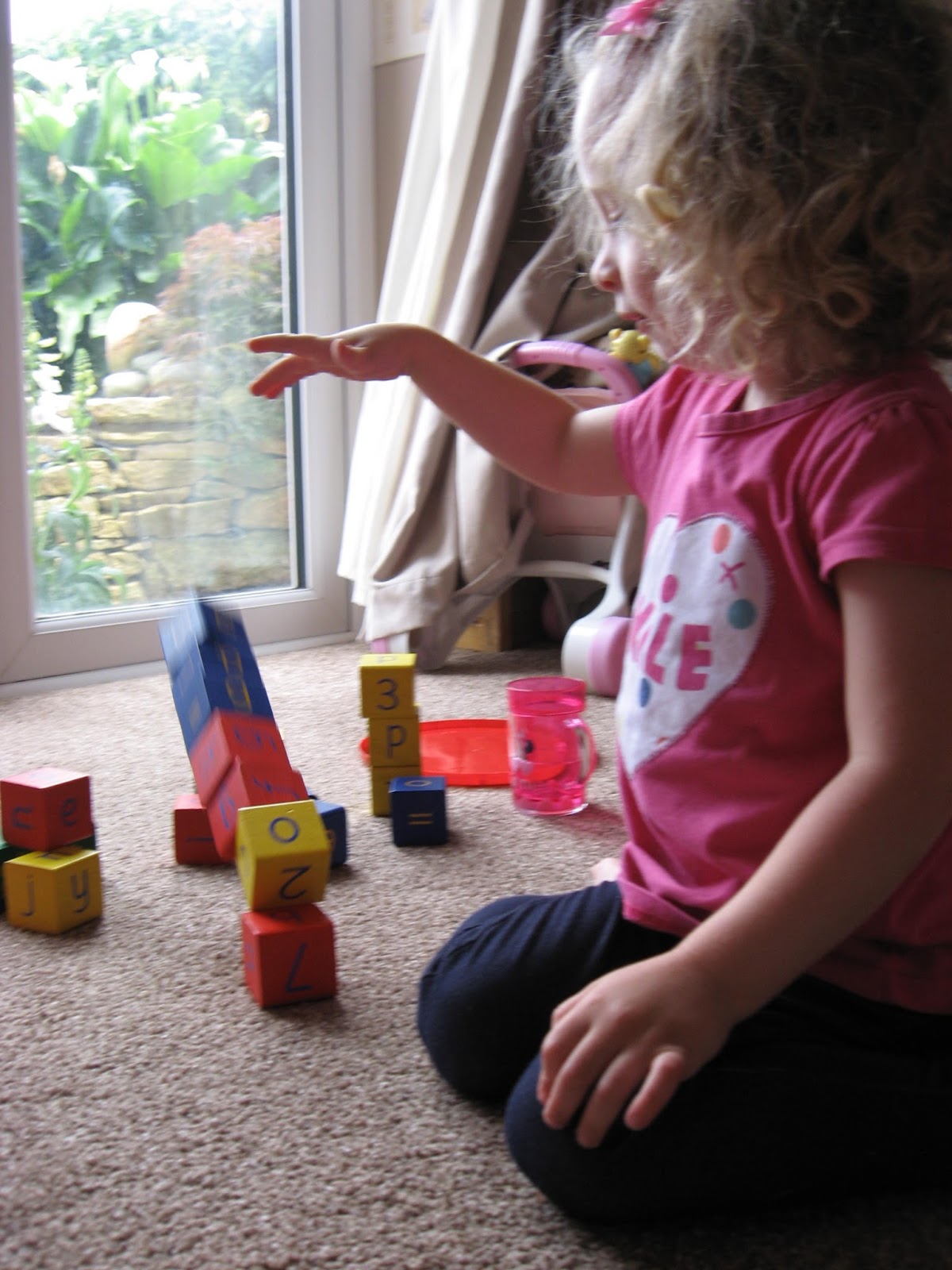 It wasn't long before her interest waned and I was left playing with the blocks myself, I think we must have mislaid a block as no matter how many times I looked I couldn't find the letter M! oh well!

at 6:00 am
Email ThisBlogThis!Share to TwitterShare to FacebookShare to Pinterest
Labels: games, little 2, mummy, playing, toys