With the warmer weather upon us the need to cool down two sweaty children has arisen on many occasions, the ice pops had run out and after spotting the Centre Parcs July challenge to make homemade lollies, we decided to make our own. 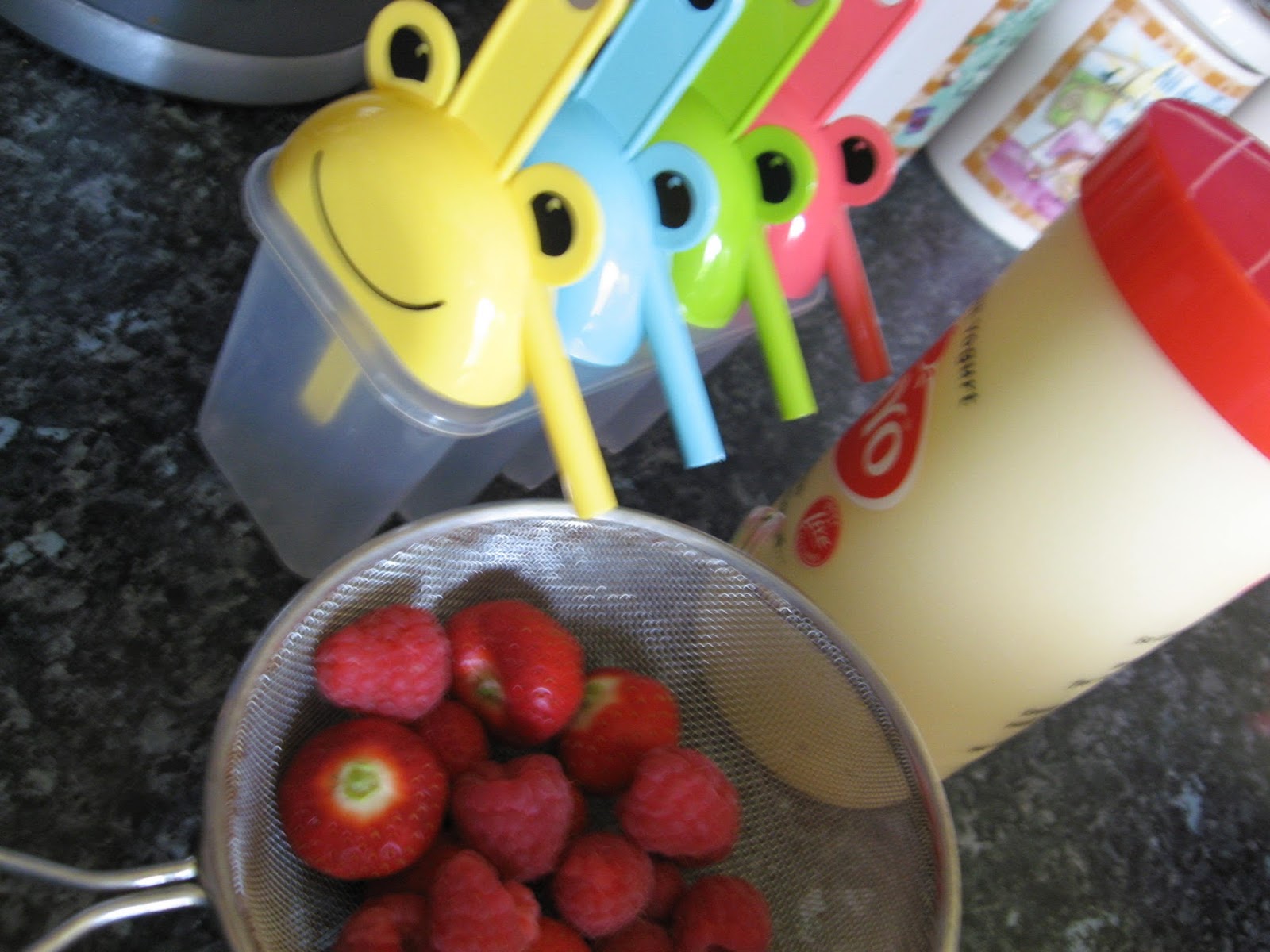 We had recently acquired a new lolly maker but had only used it for fruit juice and squash lollies up until now so this time we took some inspiration from Center Parcs lolly enthusiast, Deb Rogerson.
'Want to experiment with different flavours? Mix Greek yoghurt with a squeeze of honey, then just add your own additional flavouring. How about adding some crushed blackberries or blending banana in with the yoghurt'
We make our own yoghurt at home and had some fresh vanilla yoghurt made up ready to use. 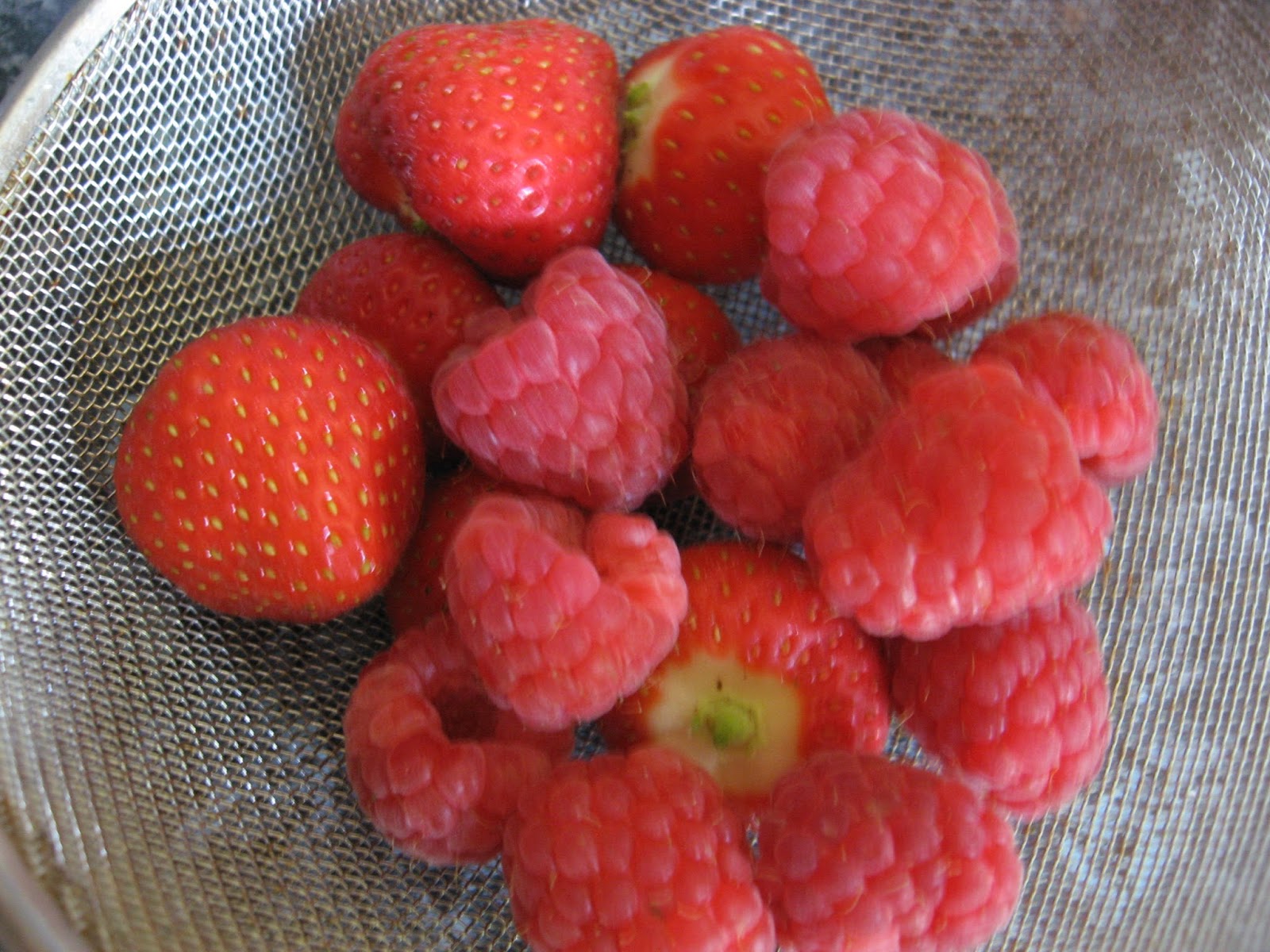 I decided a summer berry mix would be nice as the Little ones love all kinds of berries. We had some raspberries and strawberries in the fridge so in order to remove the seeds that I didn't think the Little ones would like in their lollies we mashed them through a sieve. Little 1 did the strawberries.... 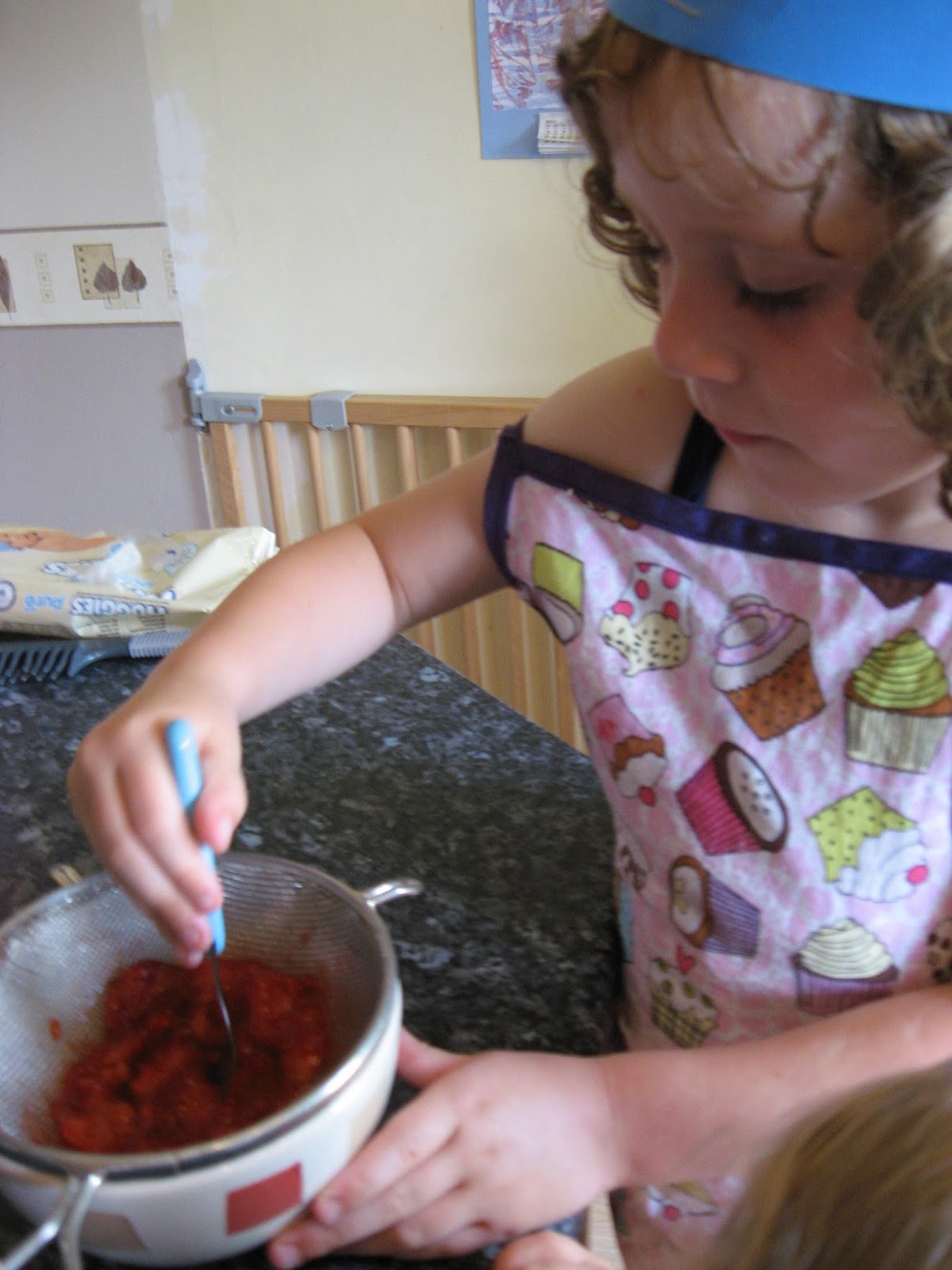 And Little 2 did the raspberries... 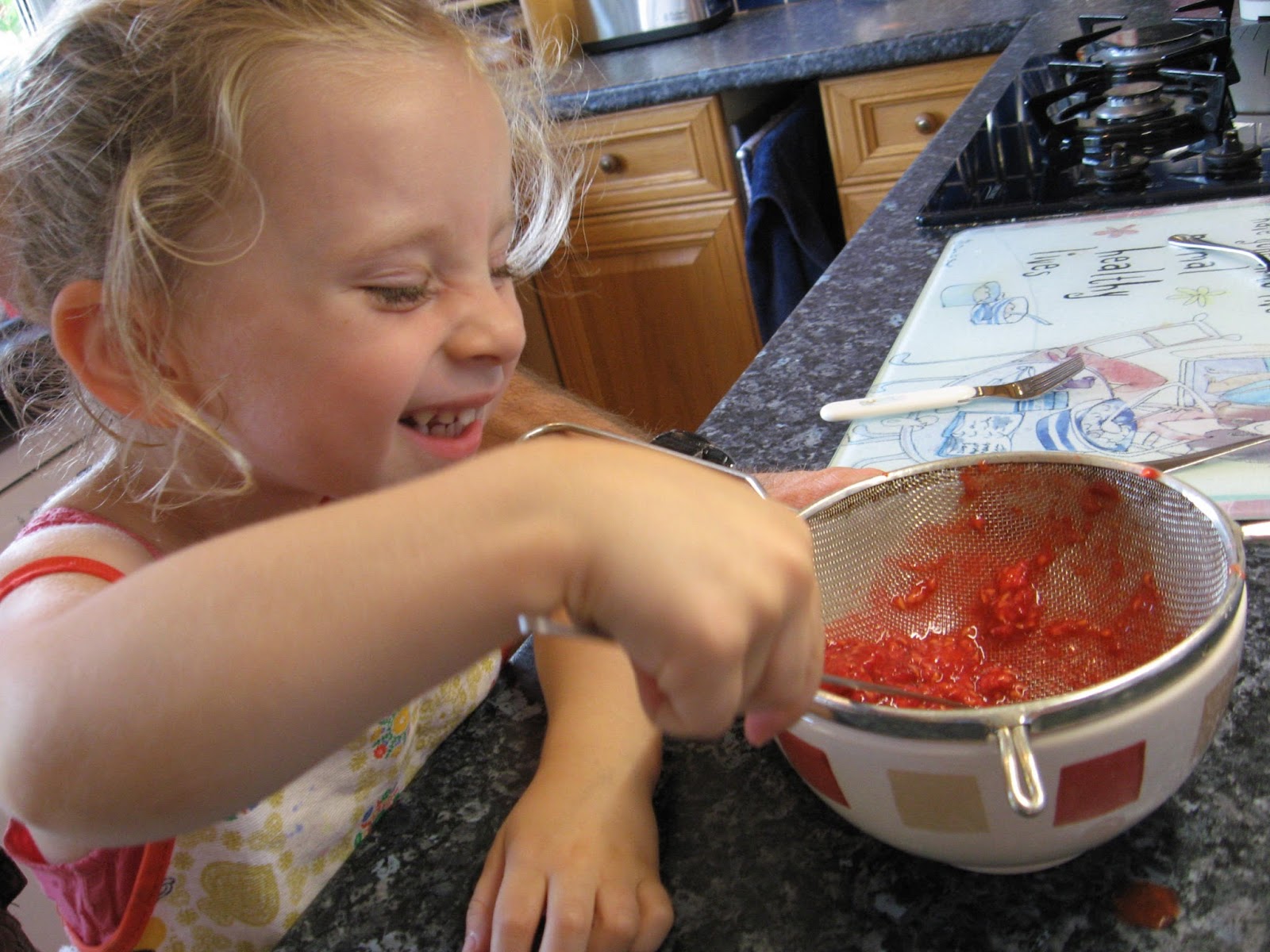 We ended up with a thick tasty syrup of the mashed fruit, no skin and no seeds, to this we added a few generous dollops of yoghurt and got mixing. 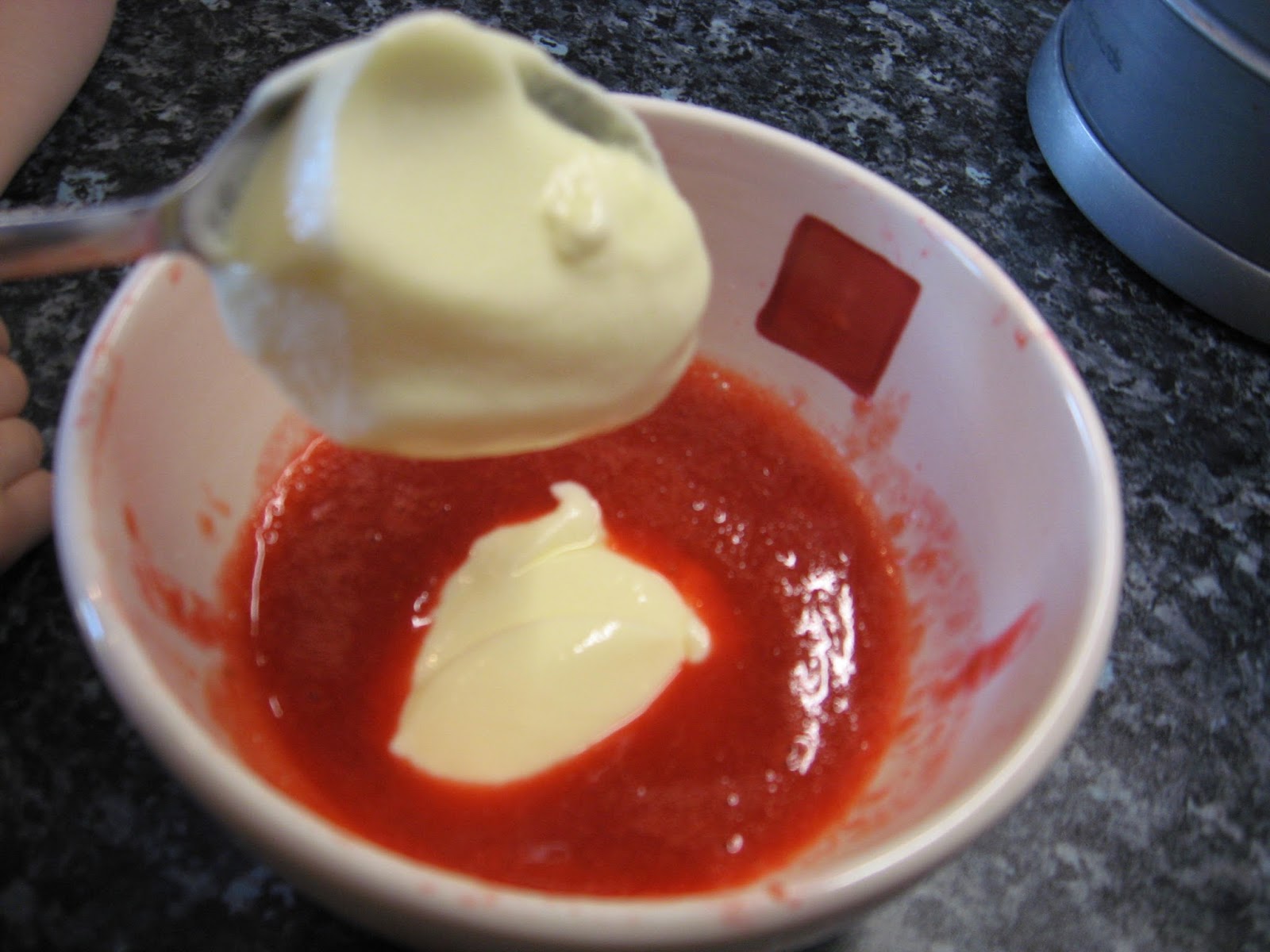 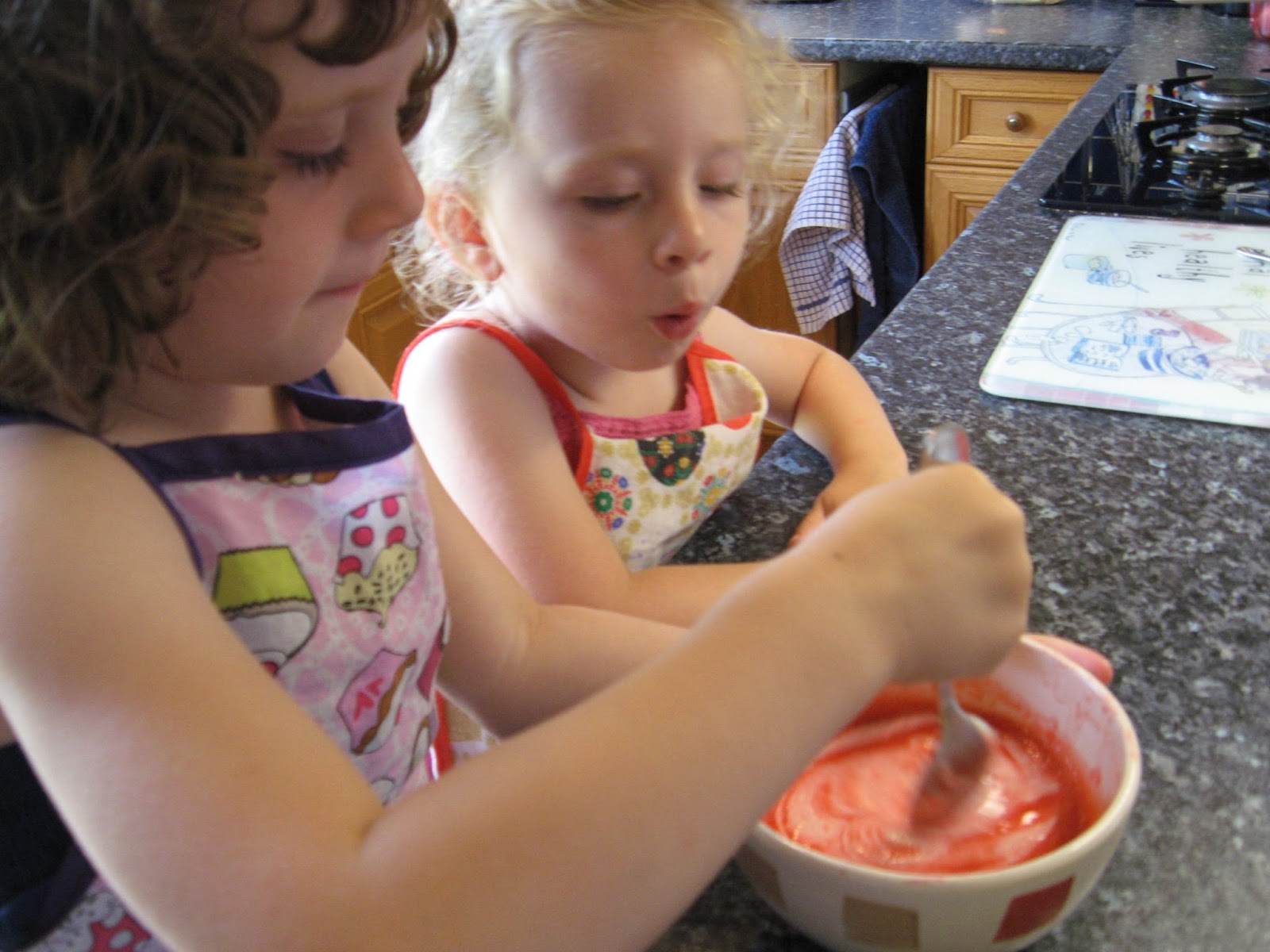 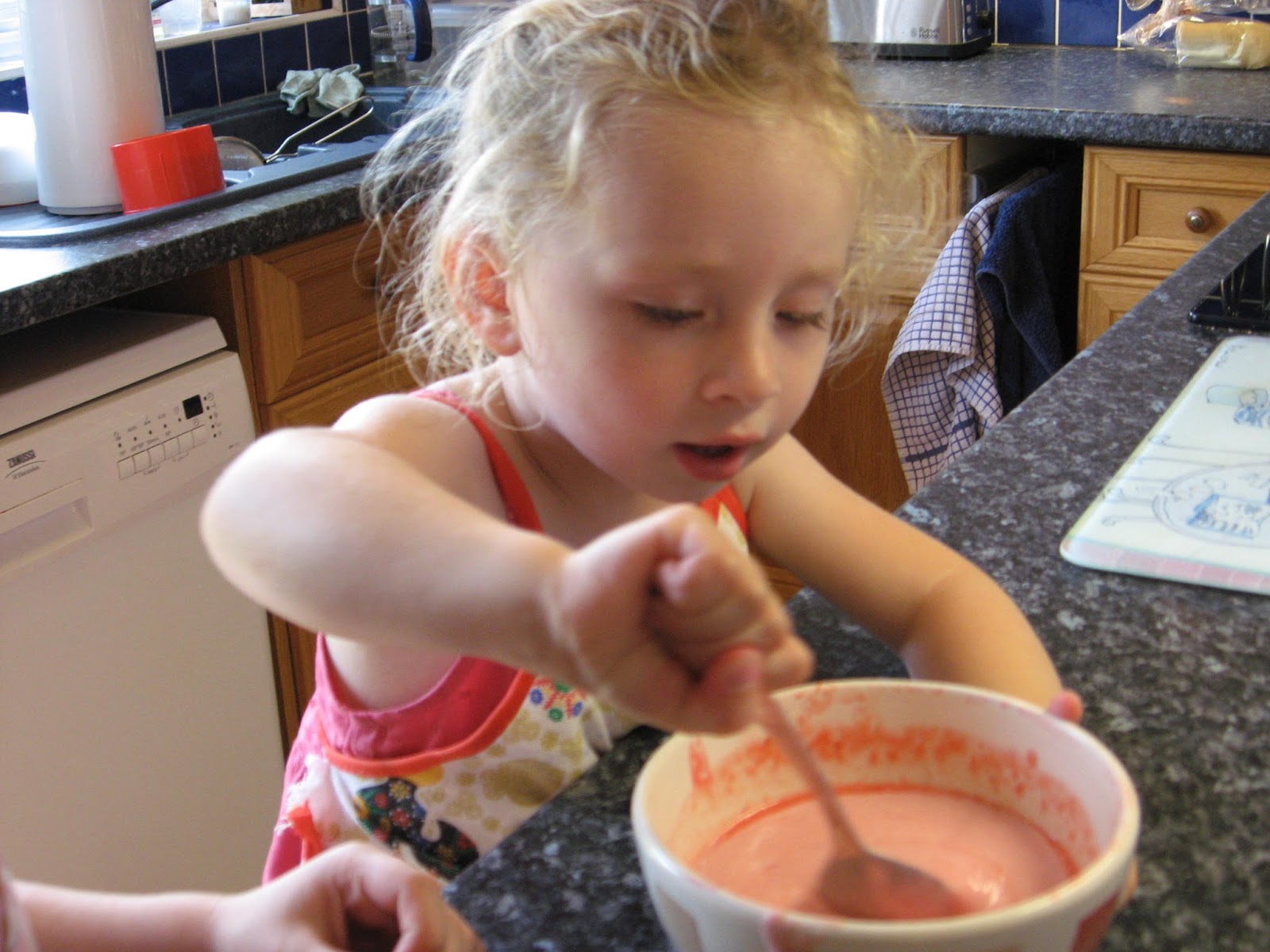 We half filled the lolly moulds as we were intending to make two flavour lollies and put them on the freezer at an angle to create a diagonal line. 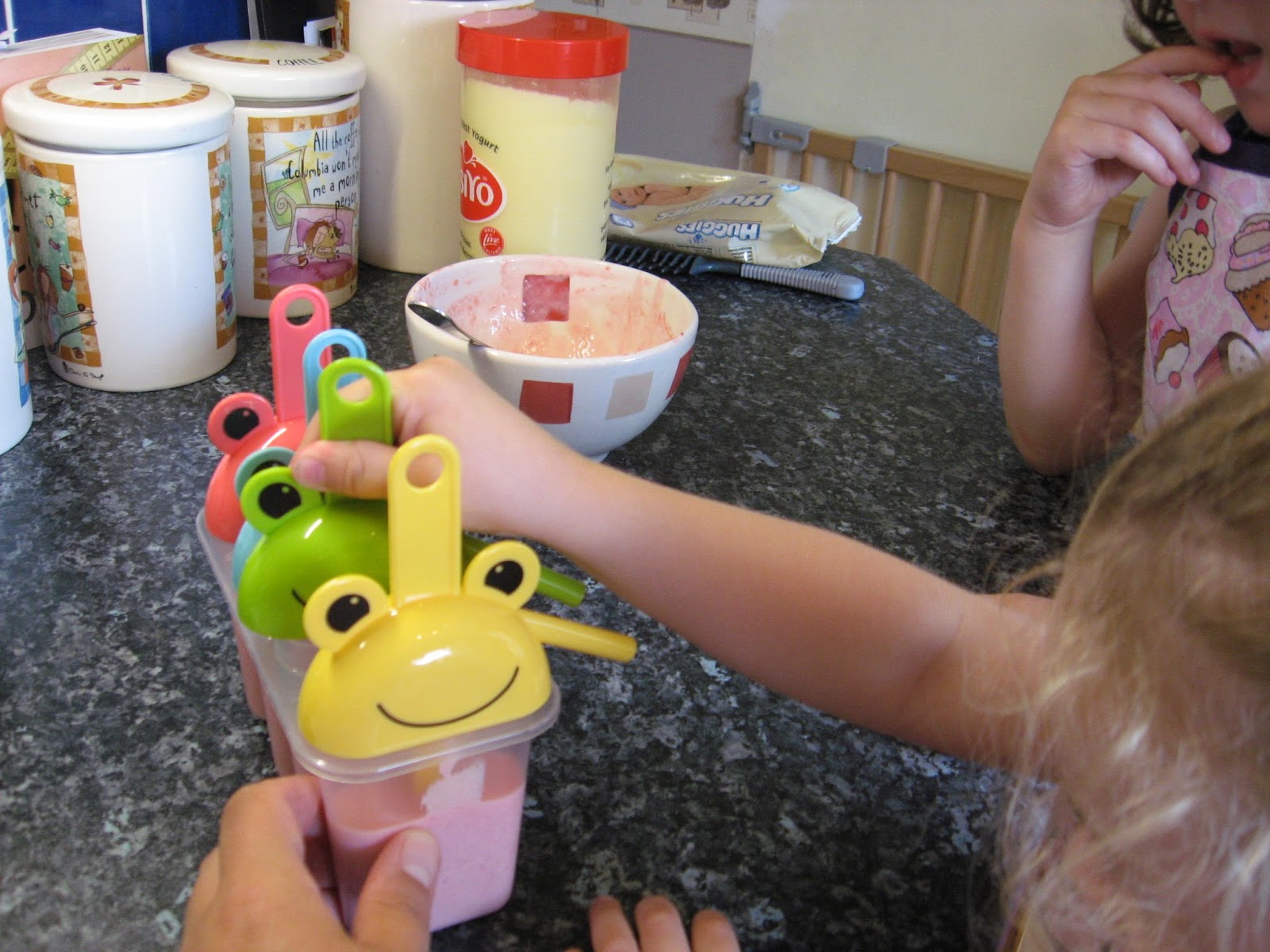 Later when the bottom half was frozen we added the second layer of blended peach and the yoghurt mixed together, the Little ones were very careful filling the mould and there was some tasting going on too! 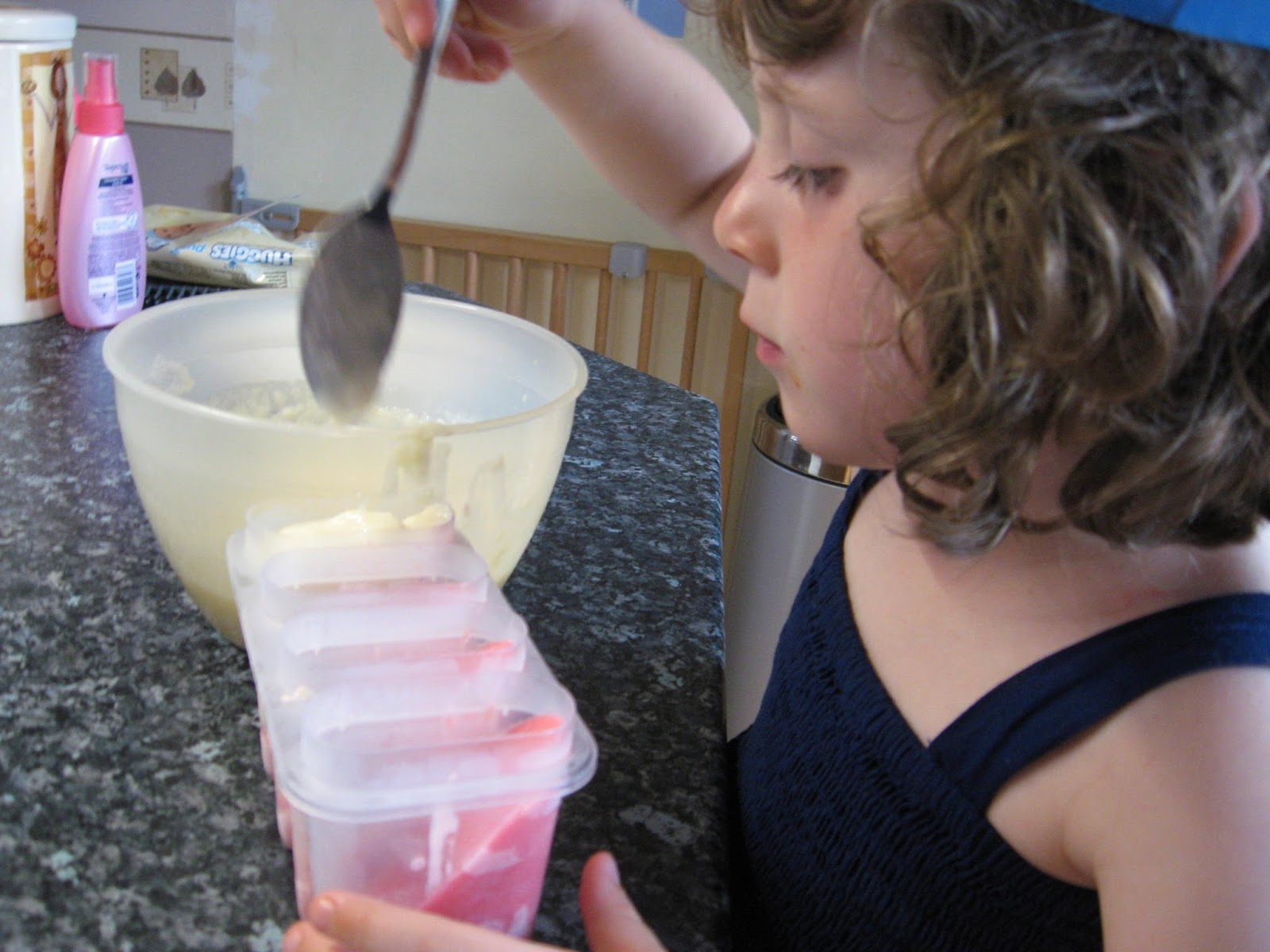 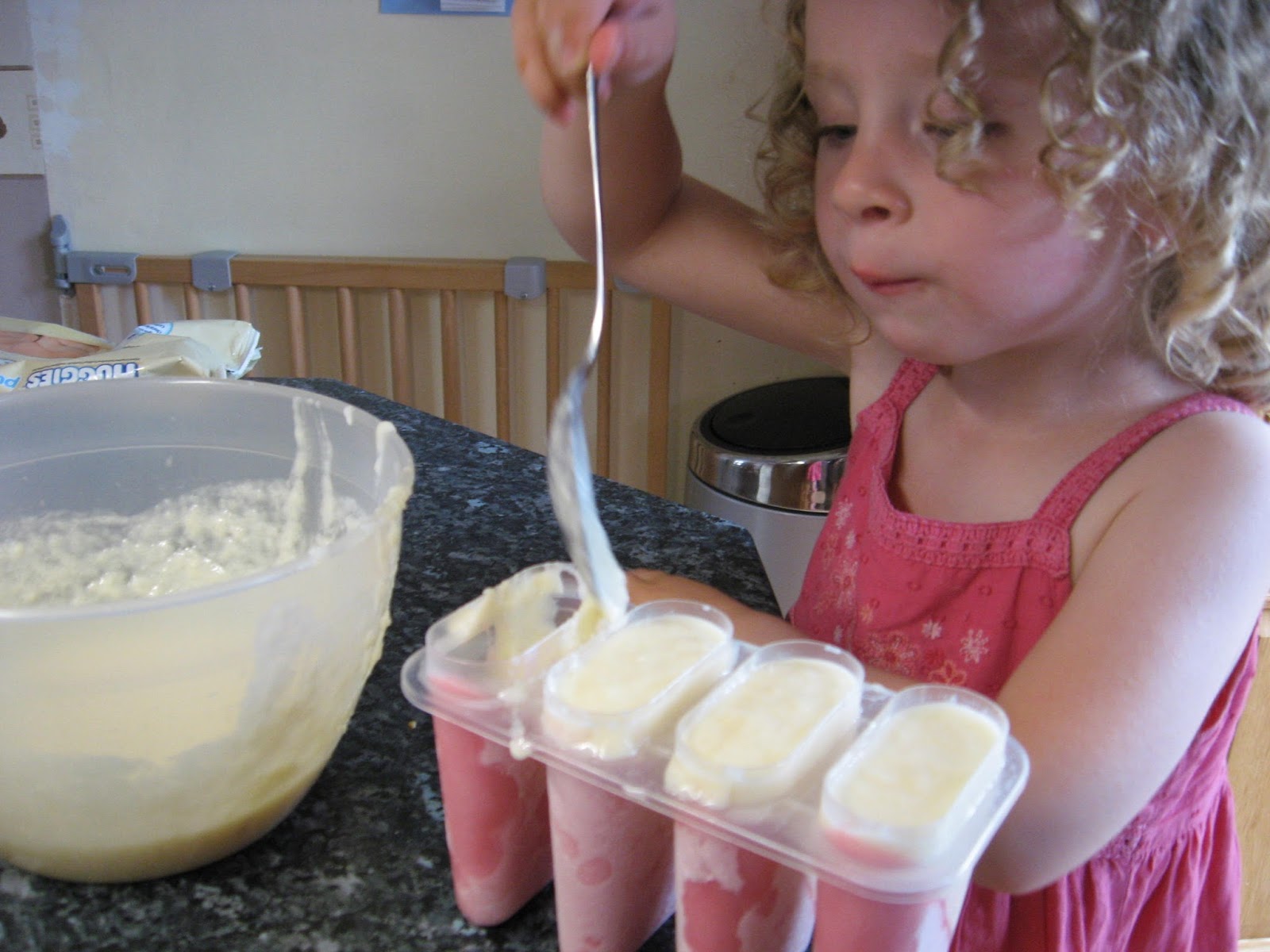 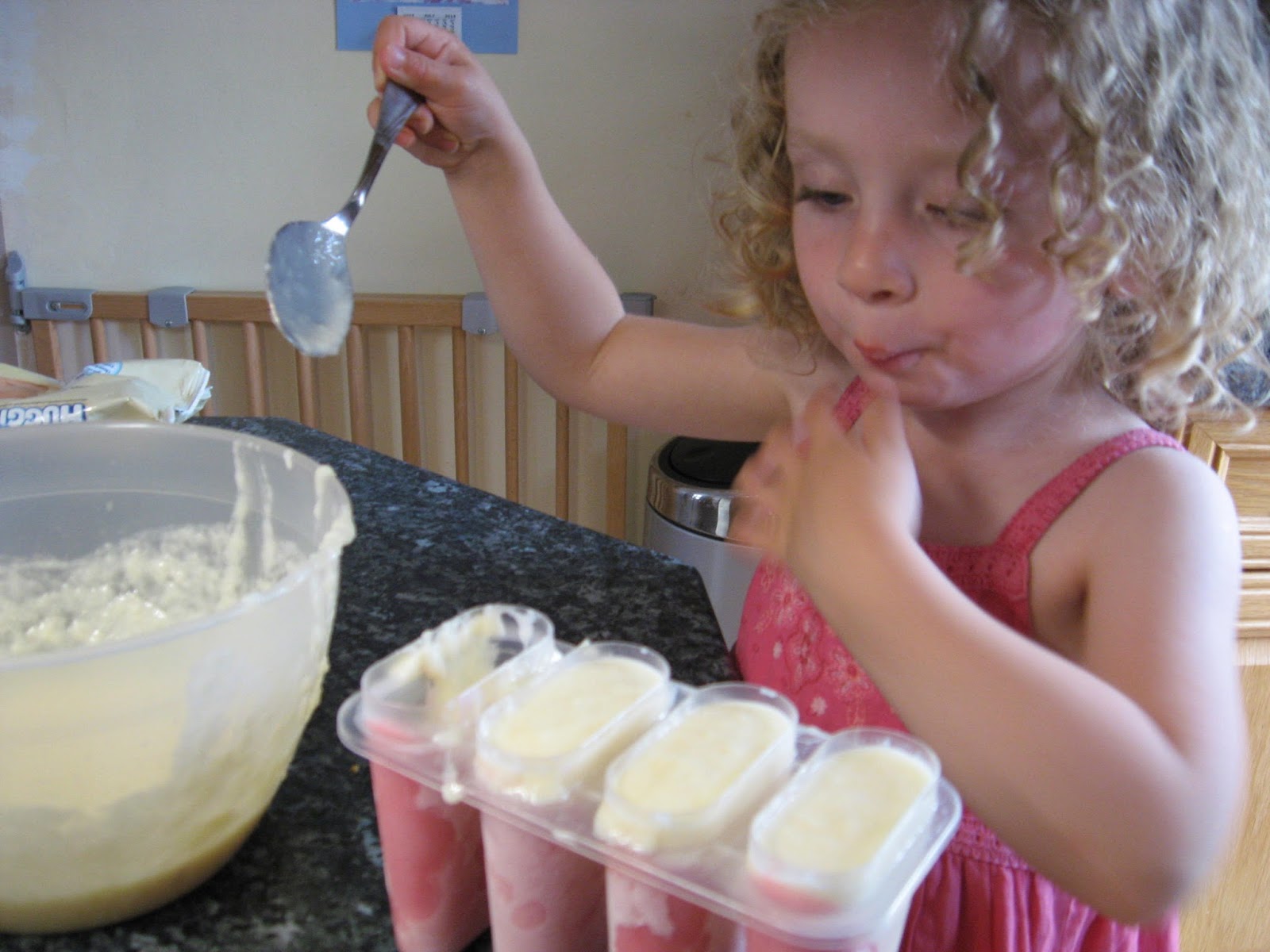 We carefully put on the lids and put them in the freezer to set. 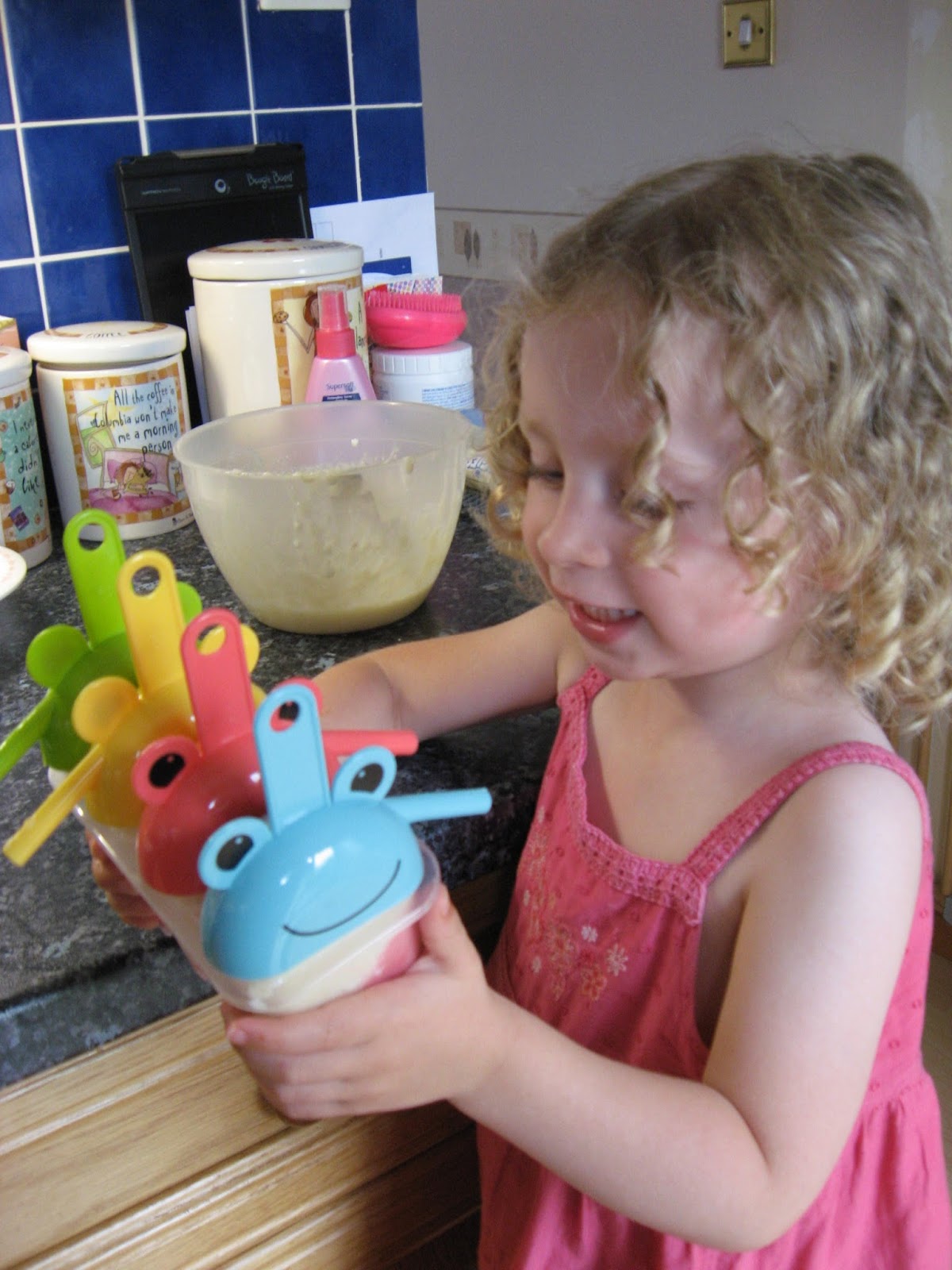 The following day was warm and sunny, perfect for tasting lollies in the garden. The two colours looked good, the Little ones got stuck in and loved the berry layer. 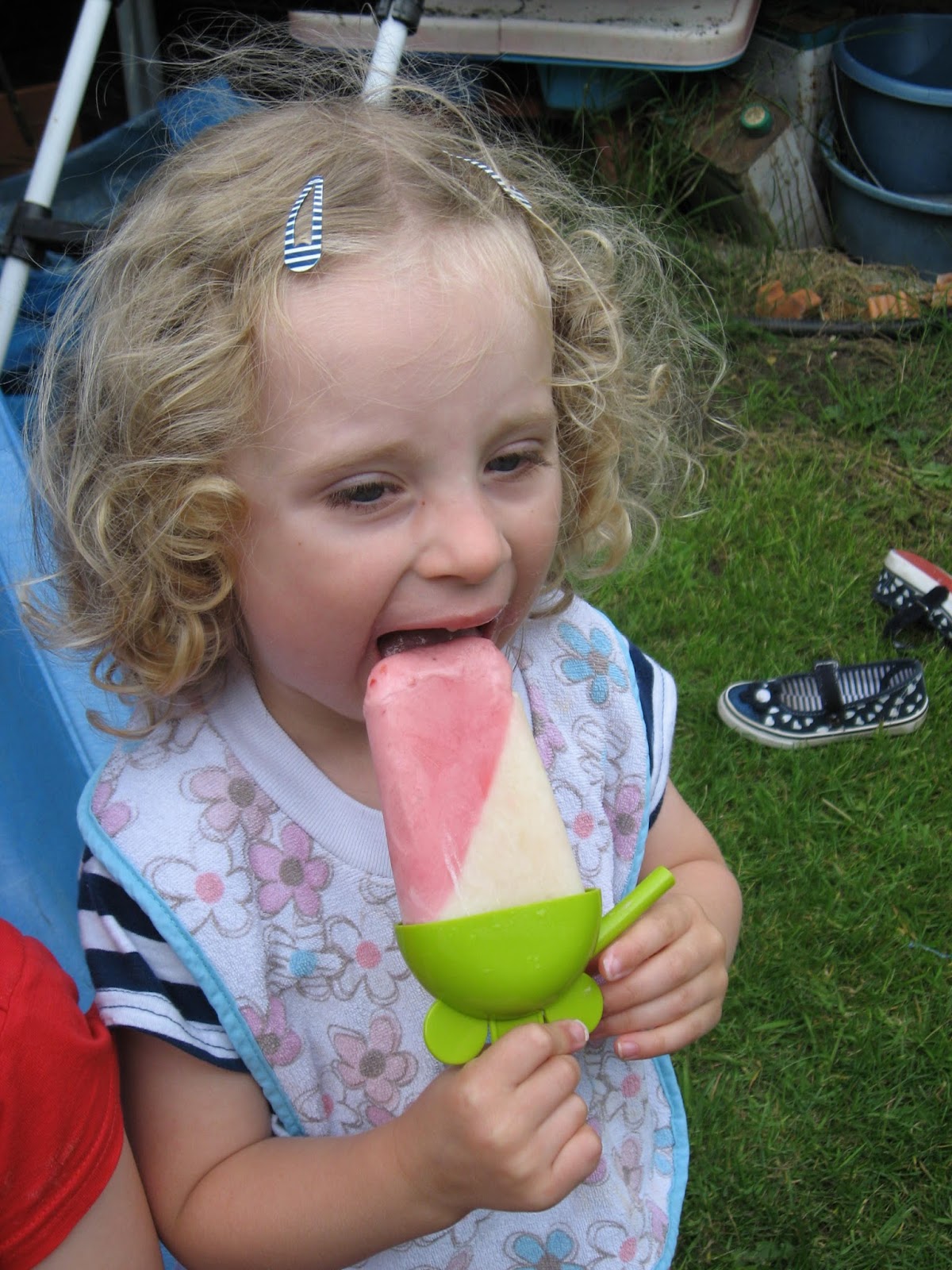 As I had blended the peaches, the peach layer had pulp in it, the Little ones were not so keen on the bits in this layer and didn't fully finish their ice lollies, but Mummy and Daddy were happy to polish them off! Next time I think we'll stick to sieving the fruits so there aren't any bits.
We have been thinking of more tasty flavours to make, our blueberries are nearly ready to pick in the garden, I think I might add them whole to yoghurt and try them like that, The girls will love digging out the fruit. 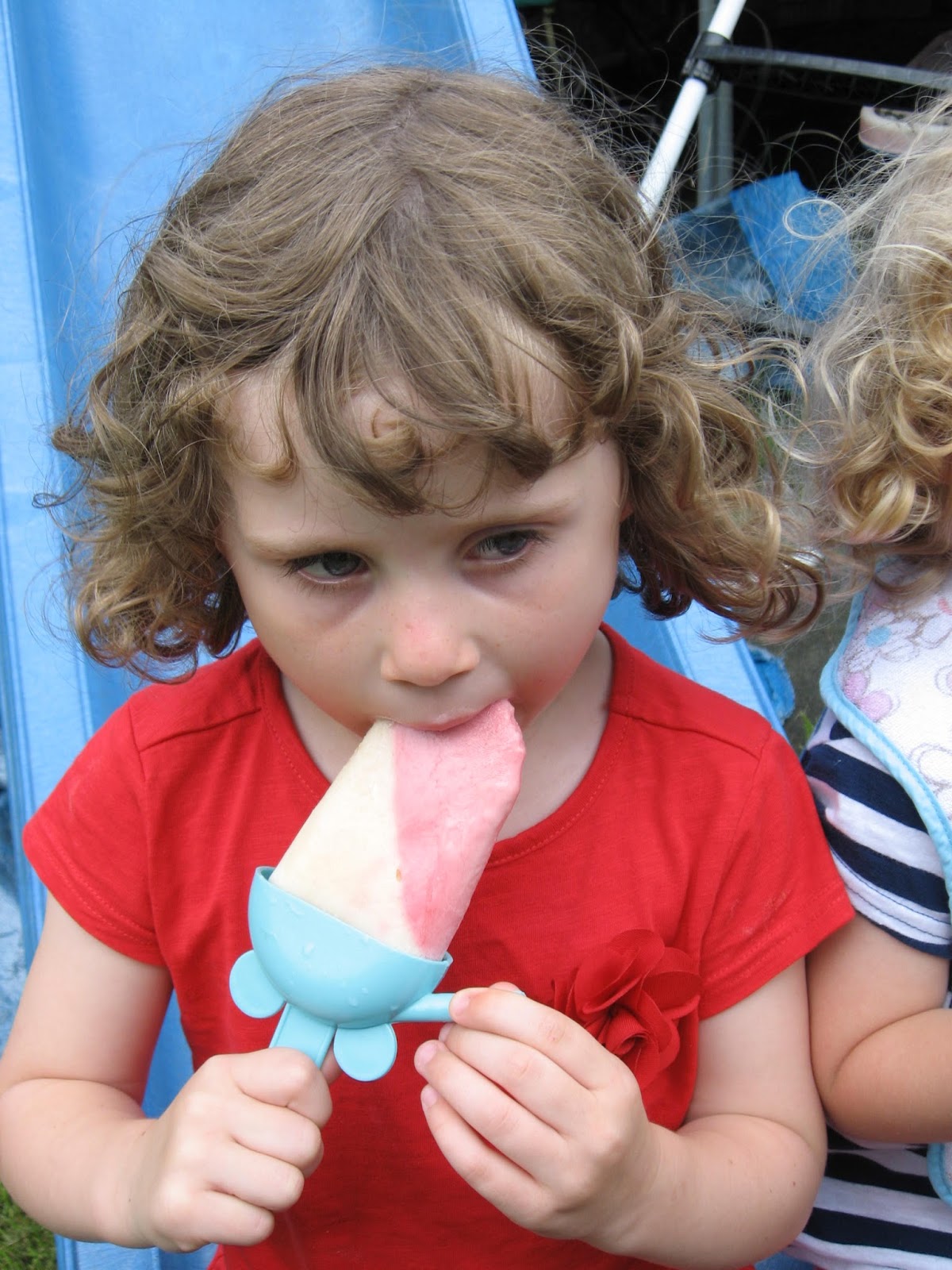 This is my entry to the Center Parcs and Tots100 July challenge. If I am chosen I would like to visit Longleat Forest.
at 7:00 am
Email ThisBlogThis!Share to TwitterShare to FacebookShare to Pinterest
Labels: competition, helping, little ones