There seem to have been quite a few posts around recently of other bloggers children having fun with water beads and knowing how much the little ones like to get their hands on anything tactile and messy, I thought we would give it a go too. If you don't know water beads are those things that you put in your vase with your flowers instead of water, they start off tiny and hard, suck up lots of water and end up looking like marbles made of gel. they are non toxic, cheap and relatively mess free so I bought some and off we went.

I bought a tiny packet for the bargain price of 55p (good old ebay) and soaked half of them overnight. I put them in a medium sided bowl with water and came down in the morning to beads all over the worktop and the floor as they had swelled soooo much they had overflowed the bowl, 1/3 of the packet would have been enough, so plenty left for another day. 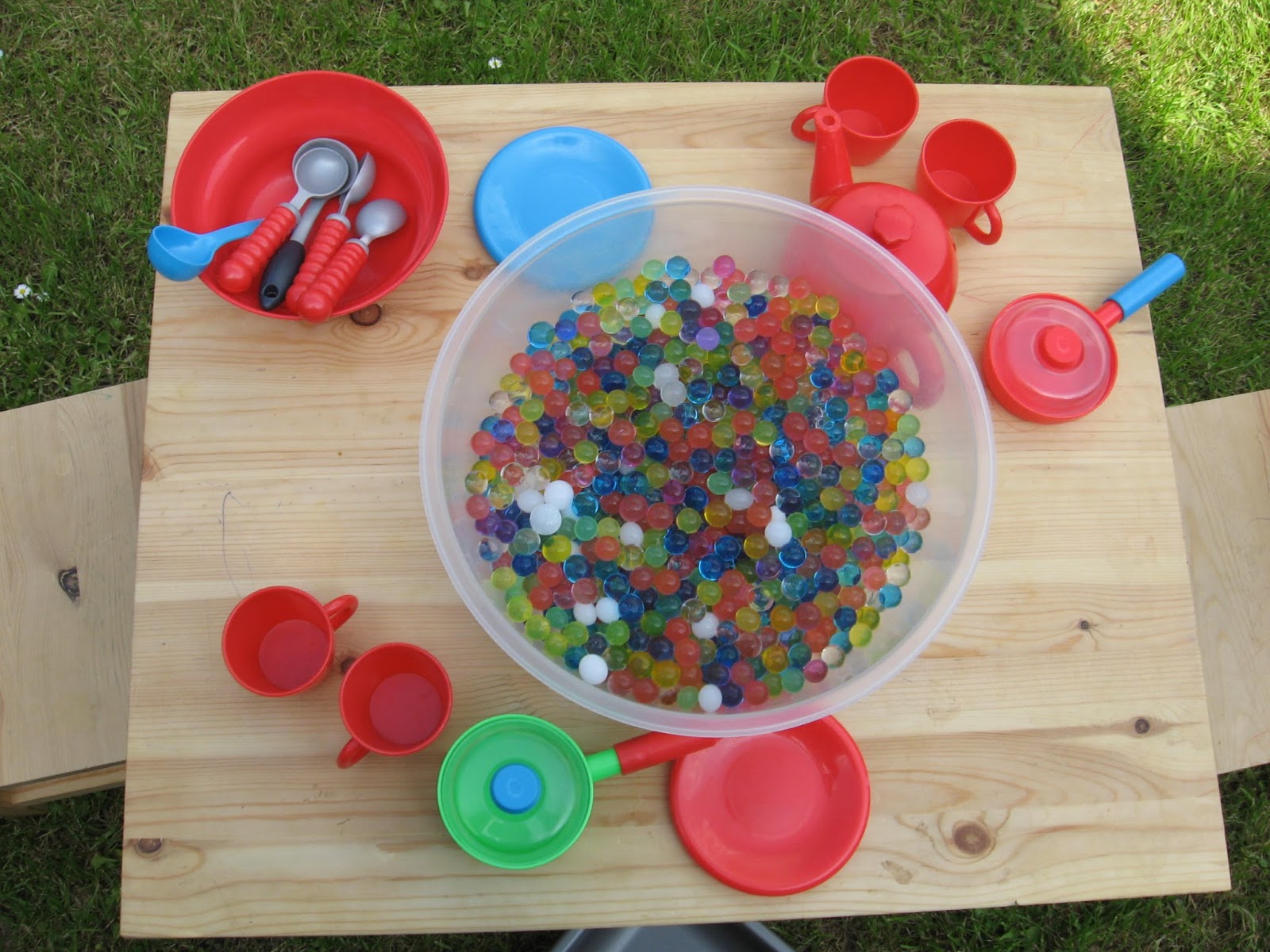 As it was a sunny day and anticipating some mess, I set the bowl up in the garden with some utensils to encourage the Little ones to scoop, tip and fill (which they love to do at the moment) and maybe play a game of tea parties too.

I then let the Little ones loose and boy didn't they get stuck straight  in... 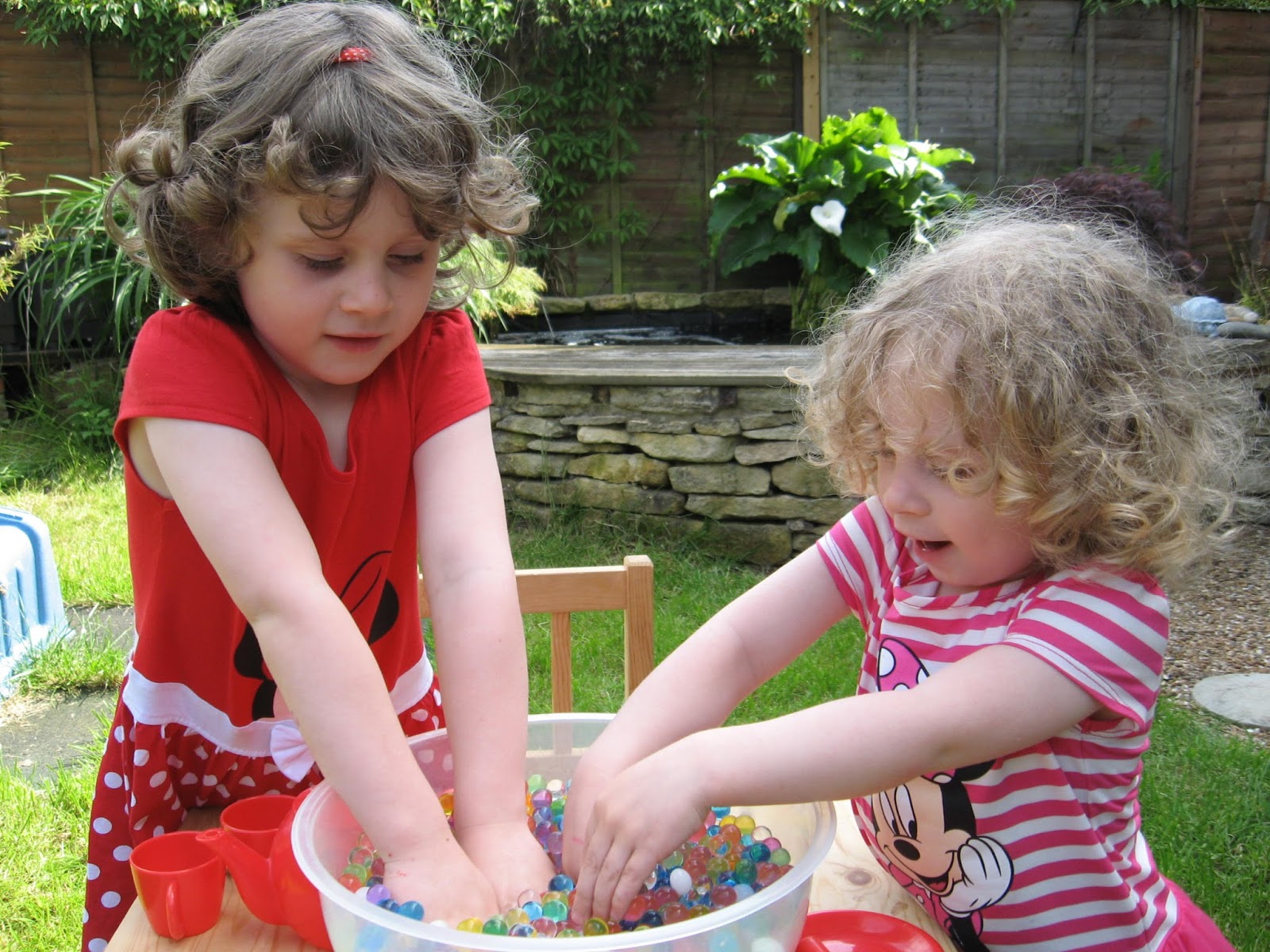 I can only describe it as if you were putting your hand in a bowl of frogspawn, they feel slimy, cold and wet. When I pulled my hand out I expected it to be slimy or smell but it was just damp and there was no odour. There were comments of 'it's wet', 'oh squishy' and 'can I pop them?' We found out they were very bouncy when Little 2 grabbed a handful and dropped them into her bowl. 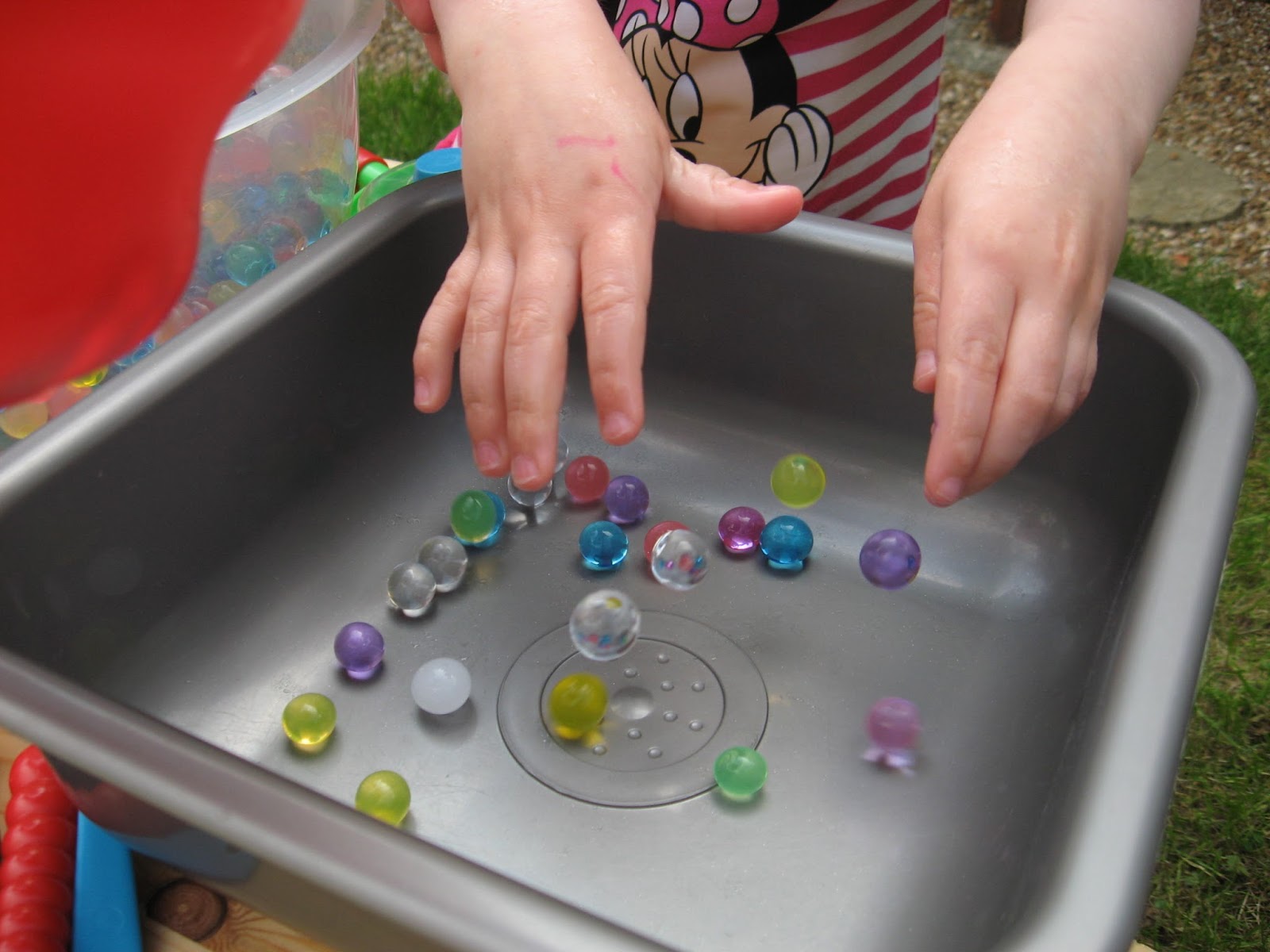 The Little ones then spent ages spooning and scooping, filling bowls, cups and a teapot. Little 2 was very methodical and concentrating hard on scooping, she played like this for ages. 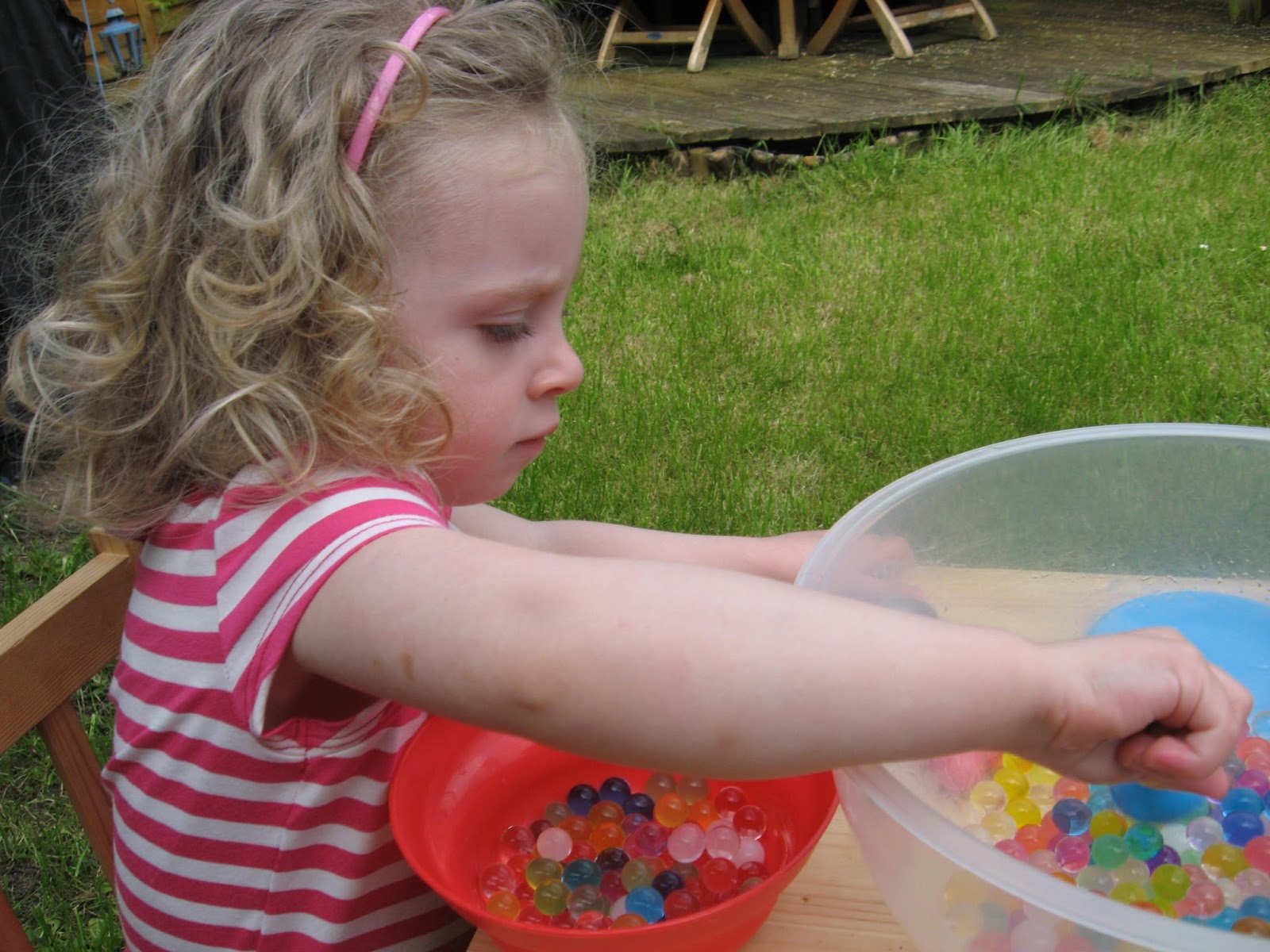 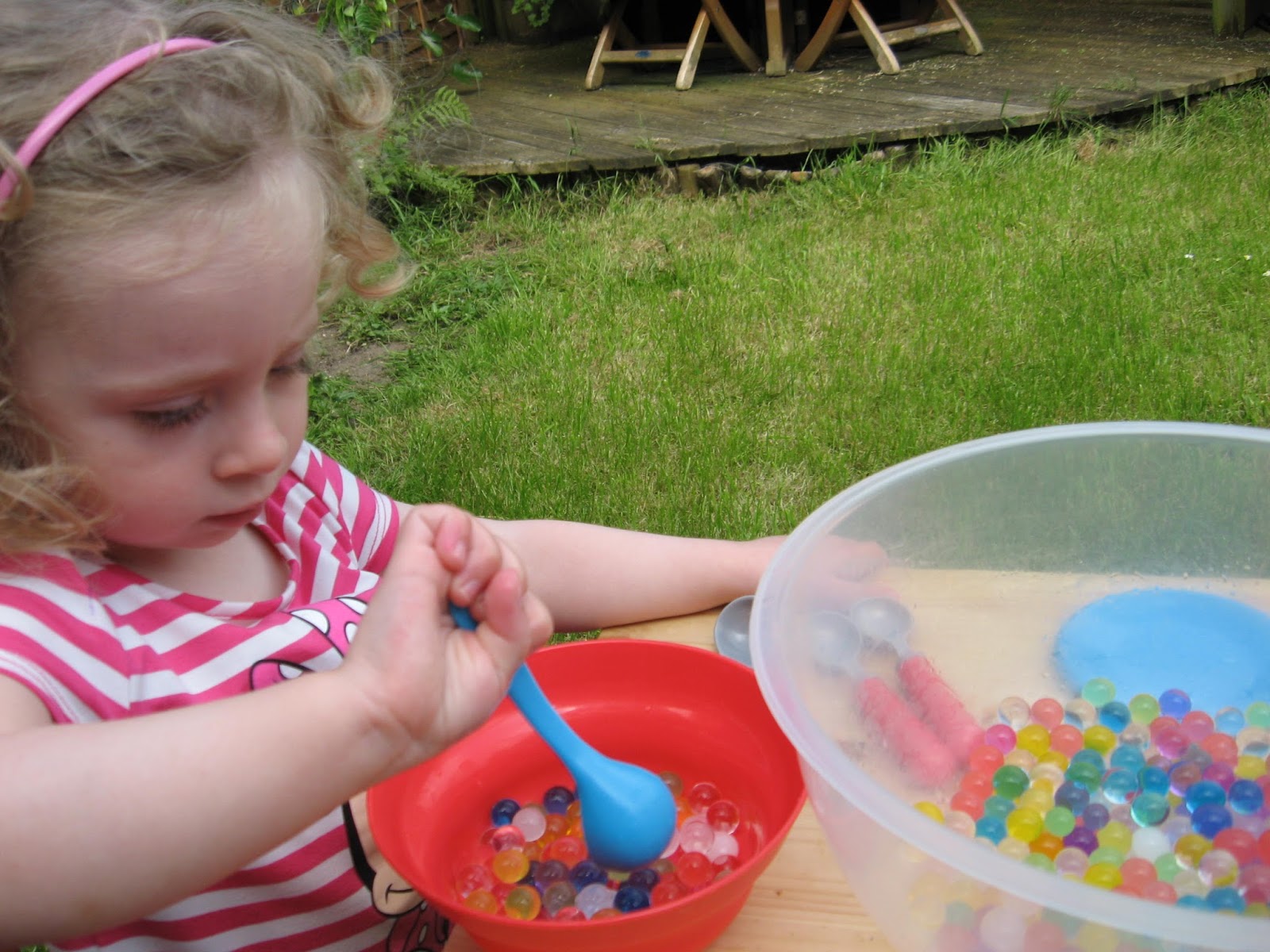 Little 1 loved plunging her hands into the beads feeling the textures and digging for the various utensils she had hidden in the bowl. 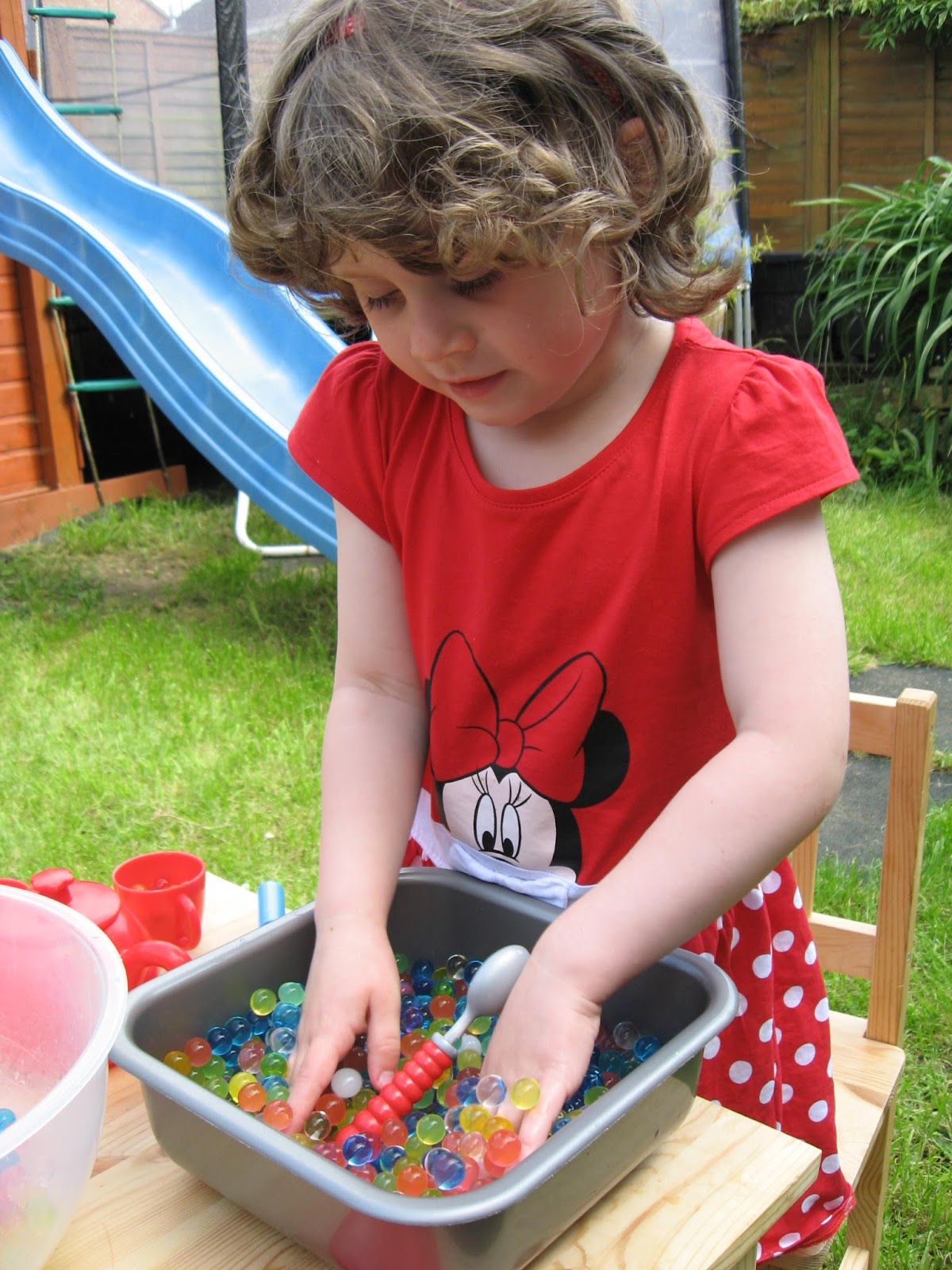 We then had a go at colour sorting and pretending to make dinner and cups of tea. 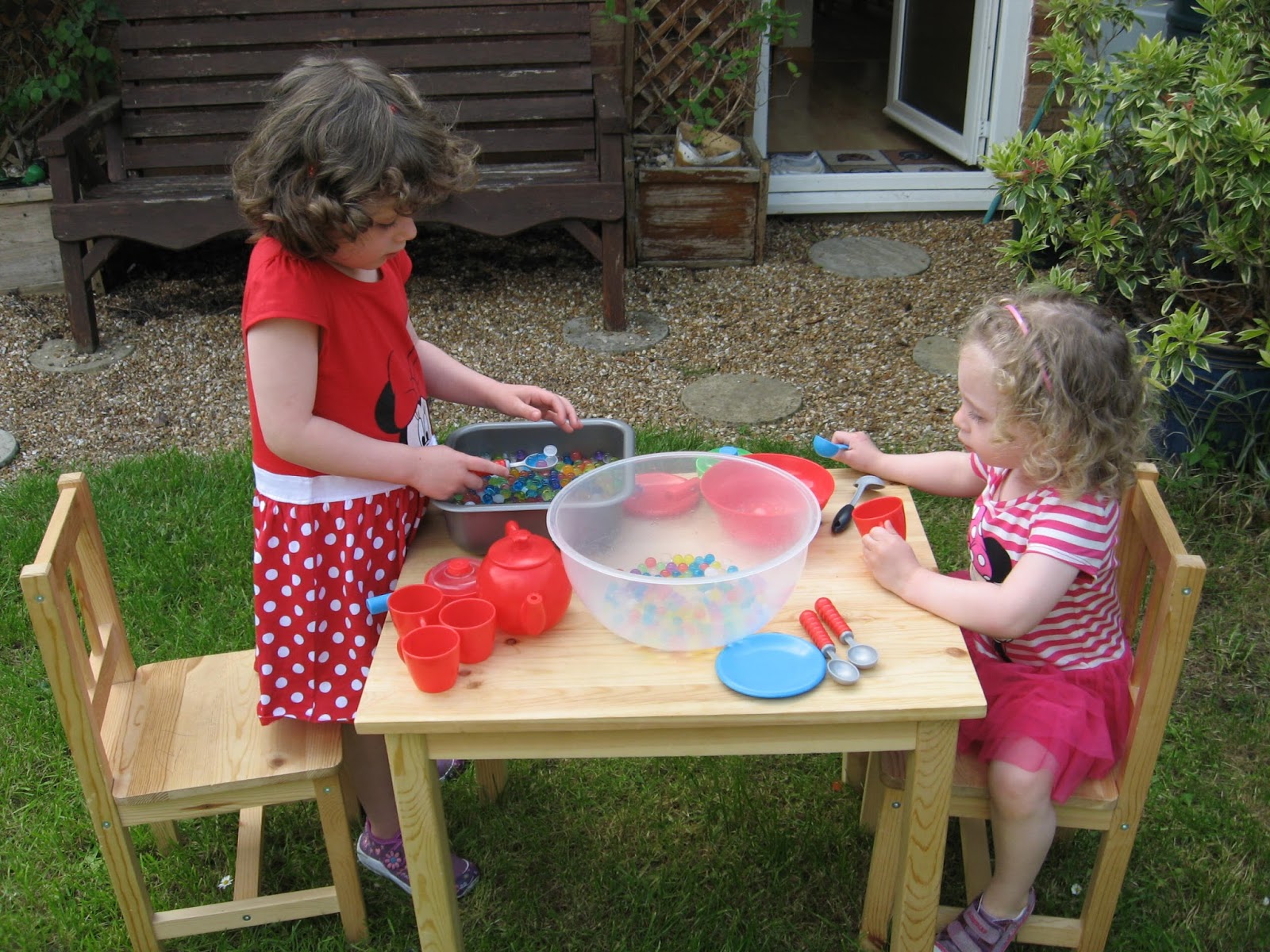 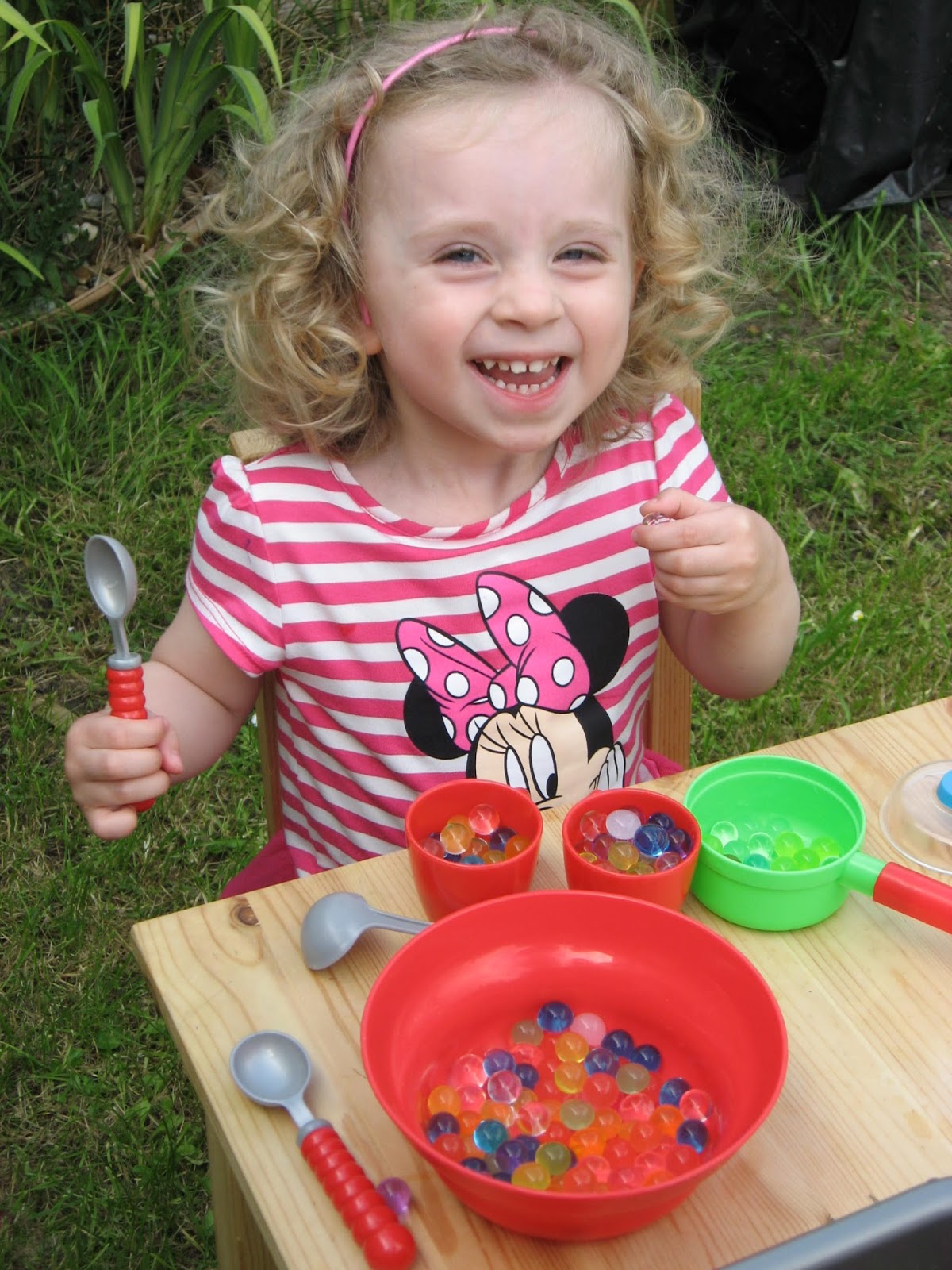 I did finally give in to Little 1's desire to pop the beads, they were made of some sort of gel that looks like jelly when it is broken up, it was quite hard to pop them as they were very slippy and they tended to jump out of my fingers, she did put a lot of effort in to trying to pop them! 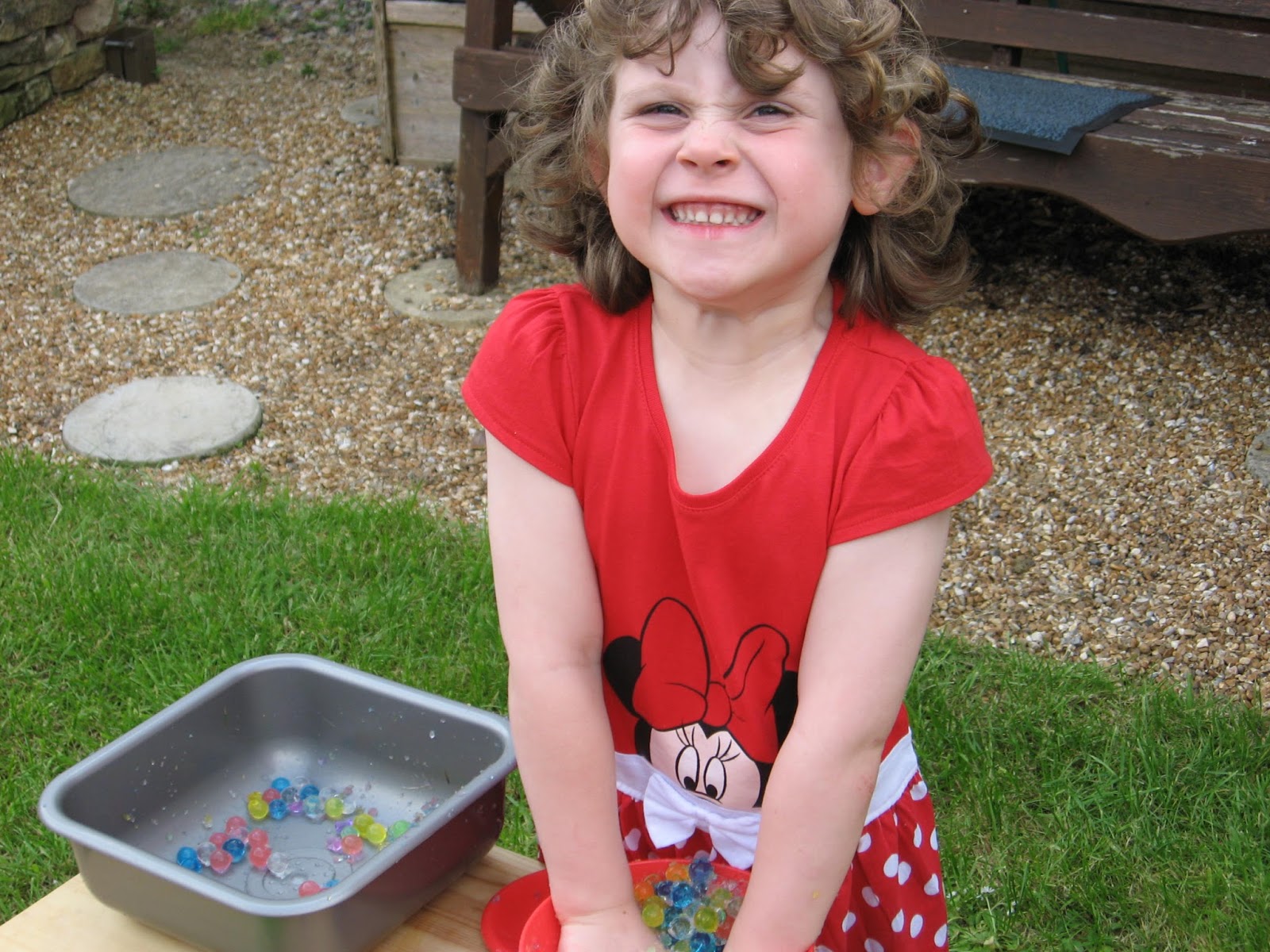 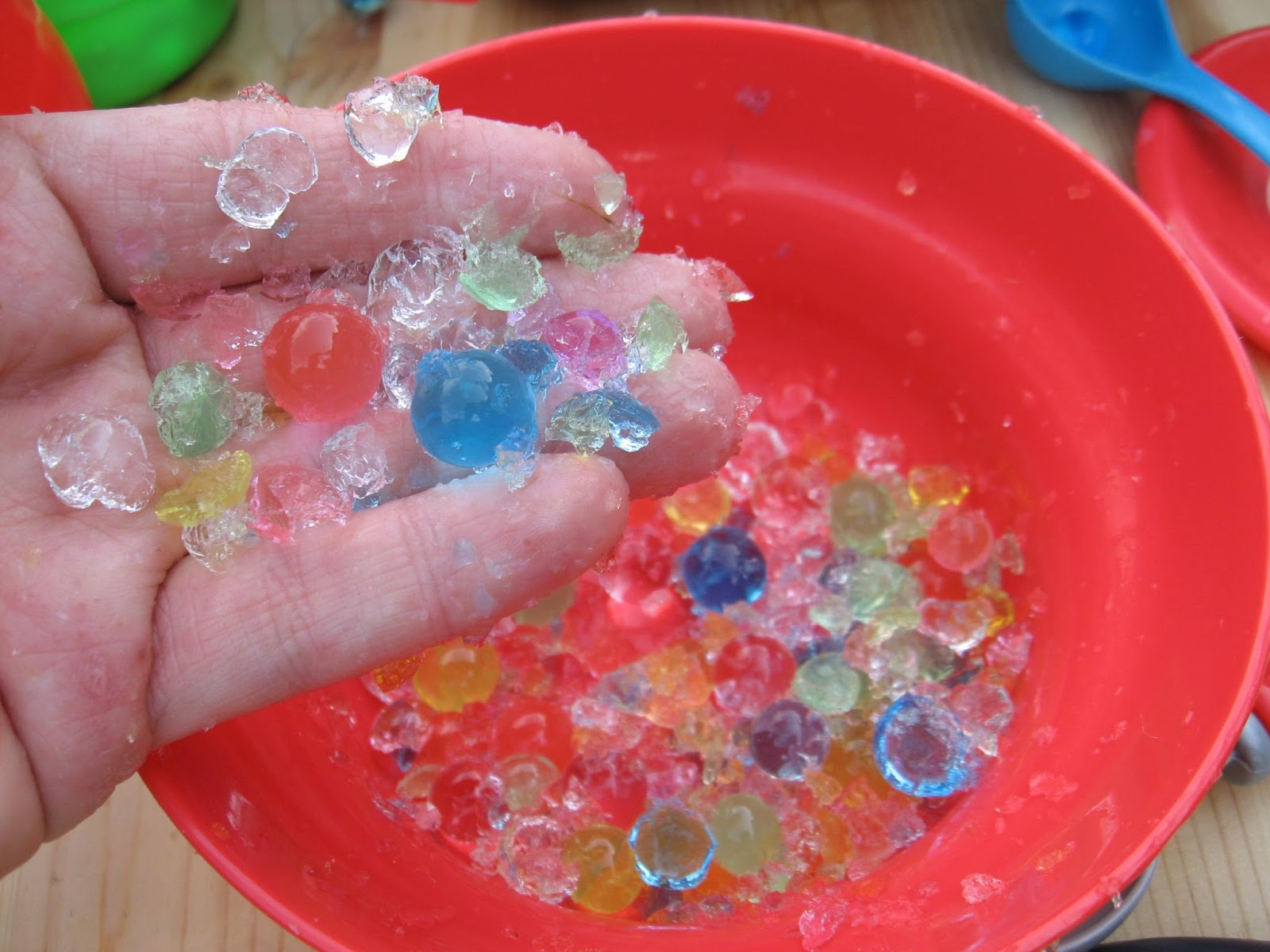 We had a lot of fun with the beads and played for a good hour, both the Little ones enjoyed it and have already asked when we can use the rest. I am glad we did the activity outside as a lot ended up on the floor and got trampled into the grass but they disappeared in a few days. We shall play with them again soon, I wonder what I can use to make the activity different next time? Any ideas?