I took the Little ones to a messy play session at our local community centre, it is run by a group called Messaround. Each week they set up different tactile experiences for the children who are free to explore them however they wish and make as much mess as possible! It is great as there are lots of things for the children to explore through tactile play, many of these things I would not do at home, and best of all I don't have to clean any of it up afterwards. I do however have to clean the children though!! It is a brilliant idea and the Little ones both love going.

It is set out with the really messy stuff in the middle of the hall on big trays with foam mats, towels and sheets laid out underneath to absorb the mess and prevent slipping and other bits around the room, Each week they have shredded paper, chalks and large rolls of paper, sand, junk (like empty boxes and bottles), water play, a painting activity and this week they had shreddies, Baked beans, orange custard with sprinkles in it and bark with leaves and plastic insects. As soon as we arrived the Little ones got stuck in..... 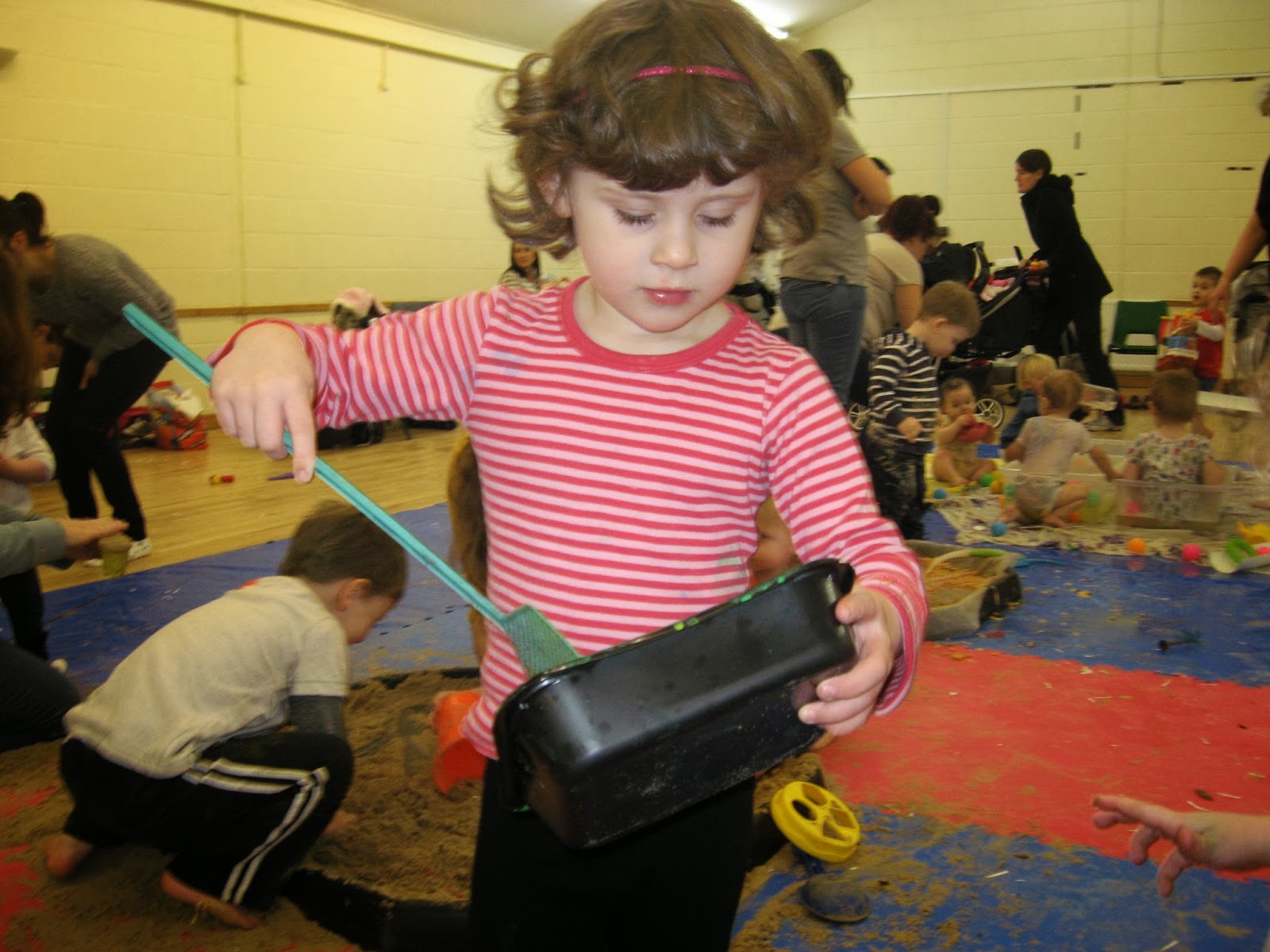 Little 1 started with painting, with a fly swat, making all sorts of splatter marks on the paper while Little 2 stood in the paint and made foot prints then turned herself into Shrek by painting herself green!! Then washed it off in the water play bit. (The green paint did wash off in the bath but there was a lingering green tinge for a day or two!) 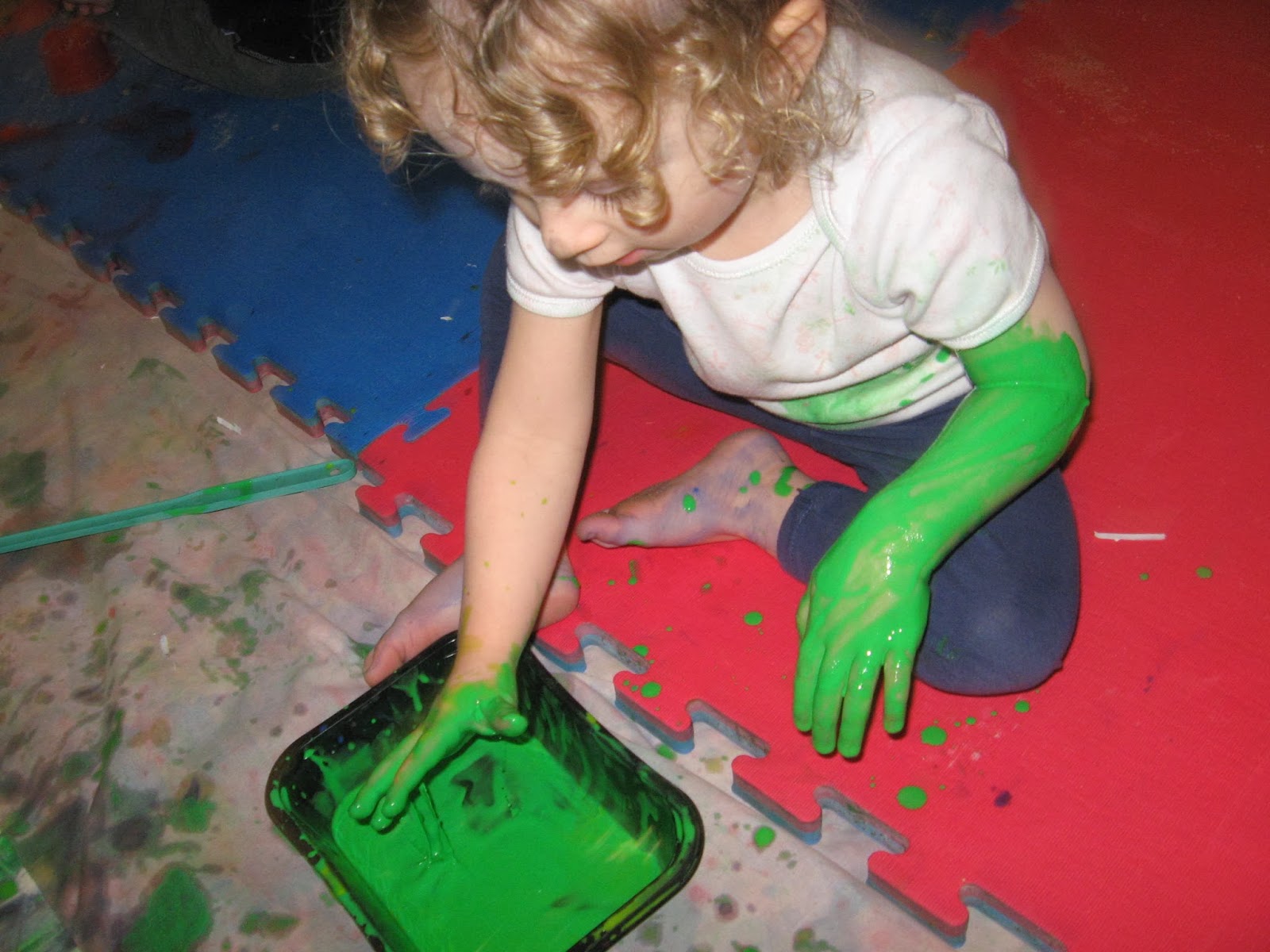 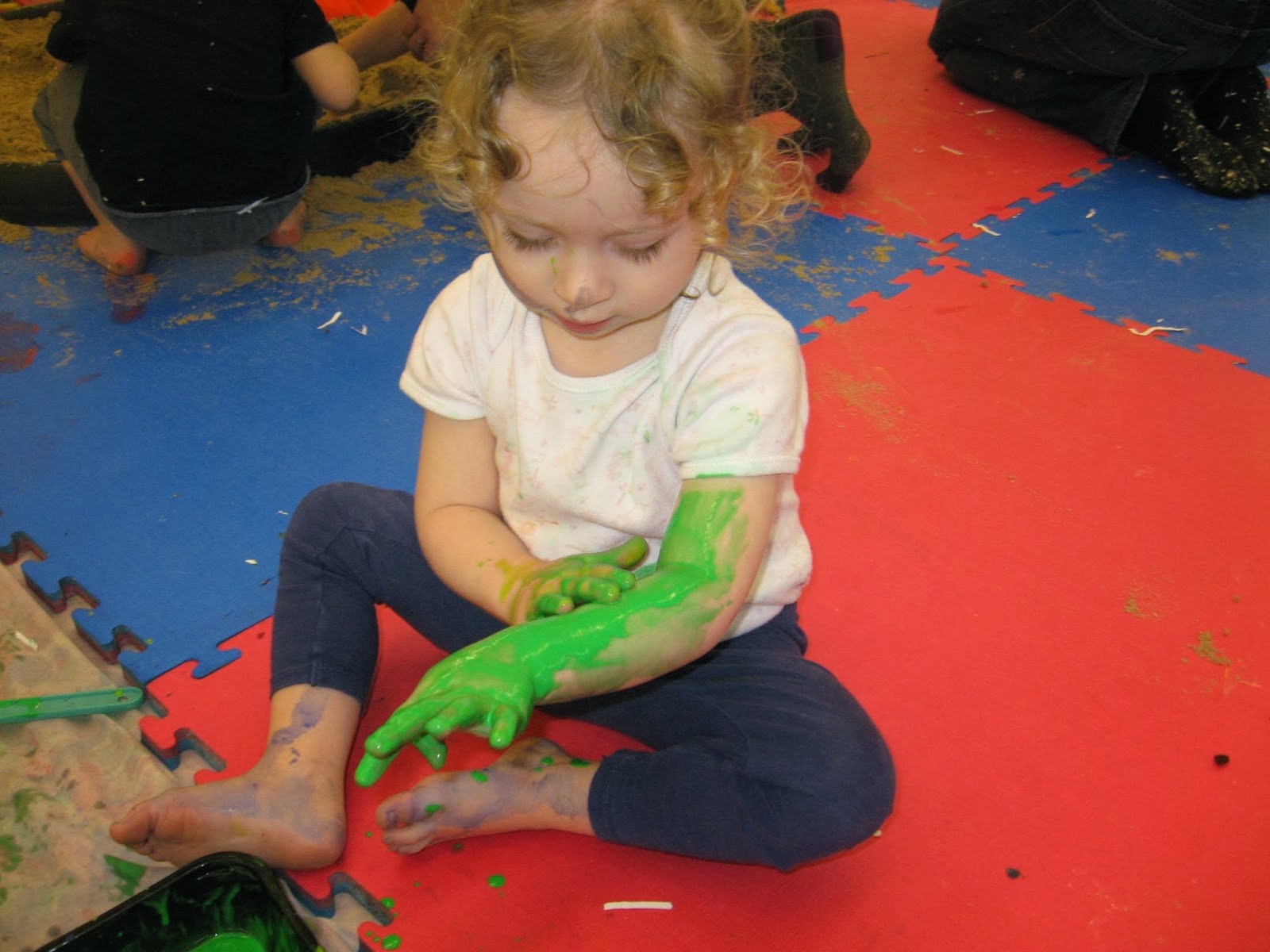 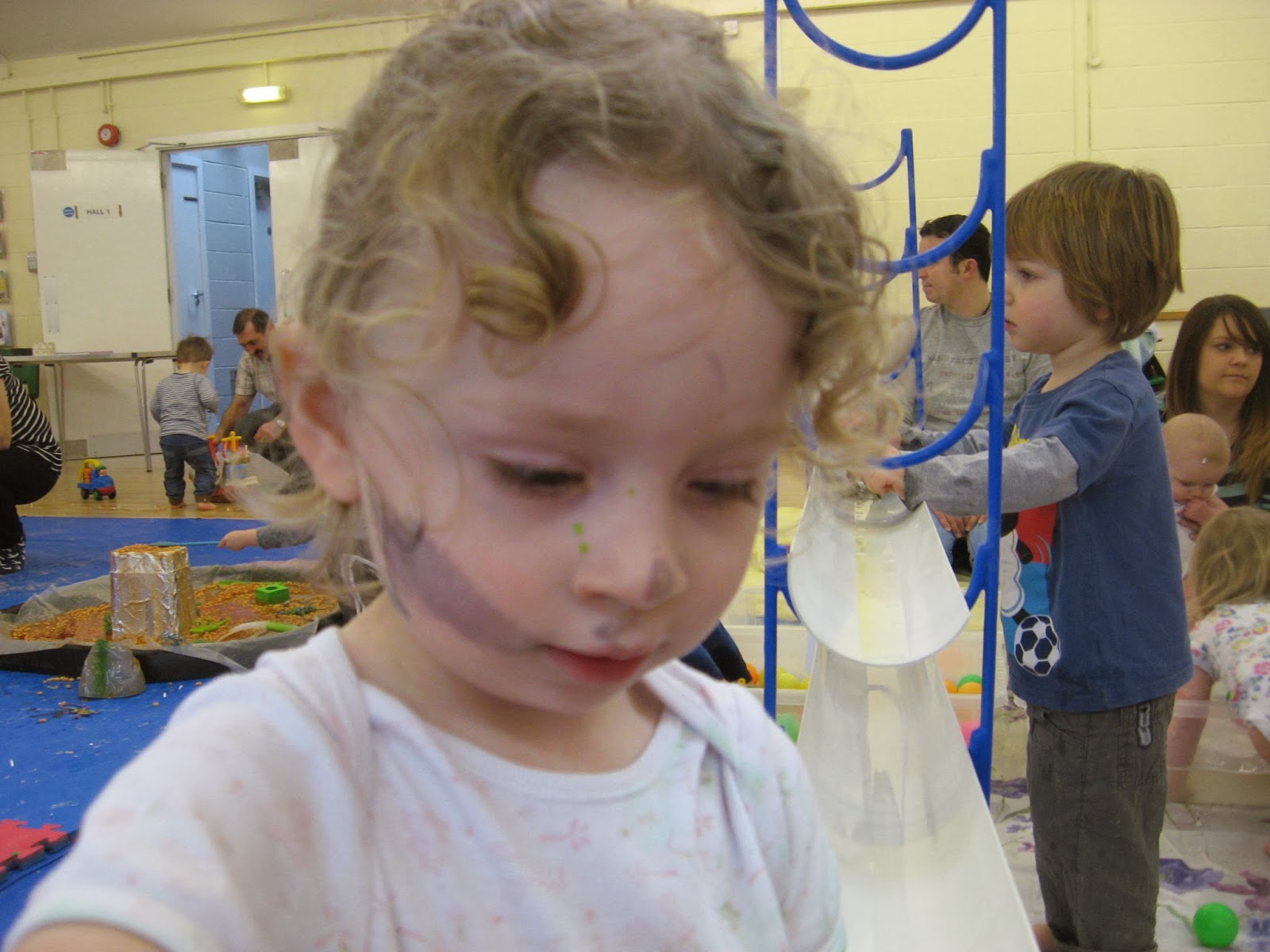 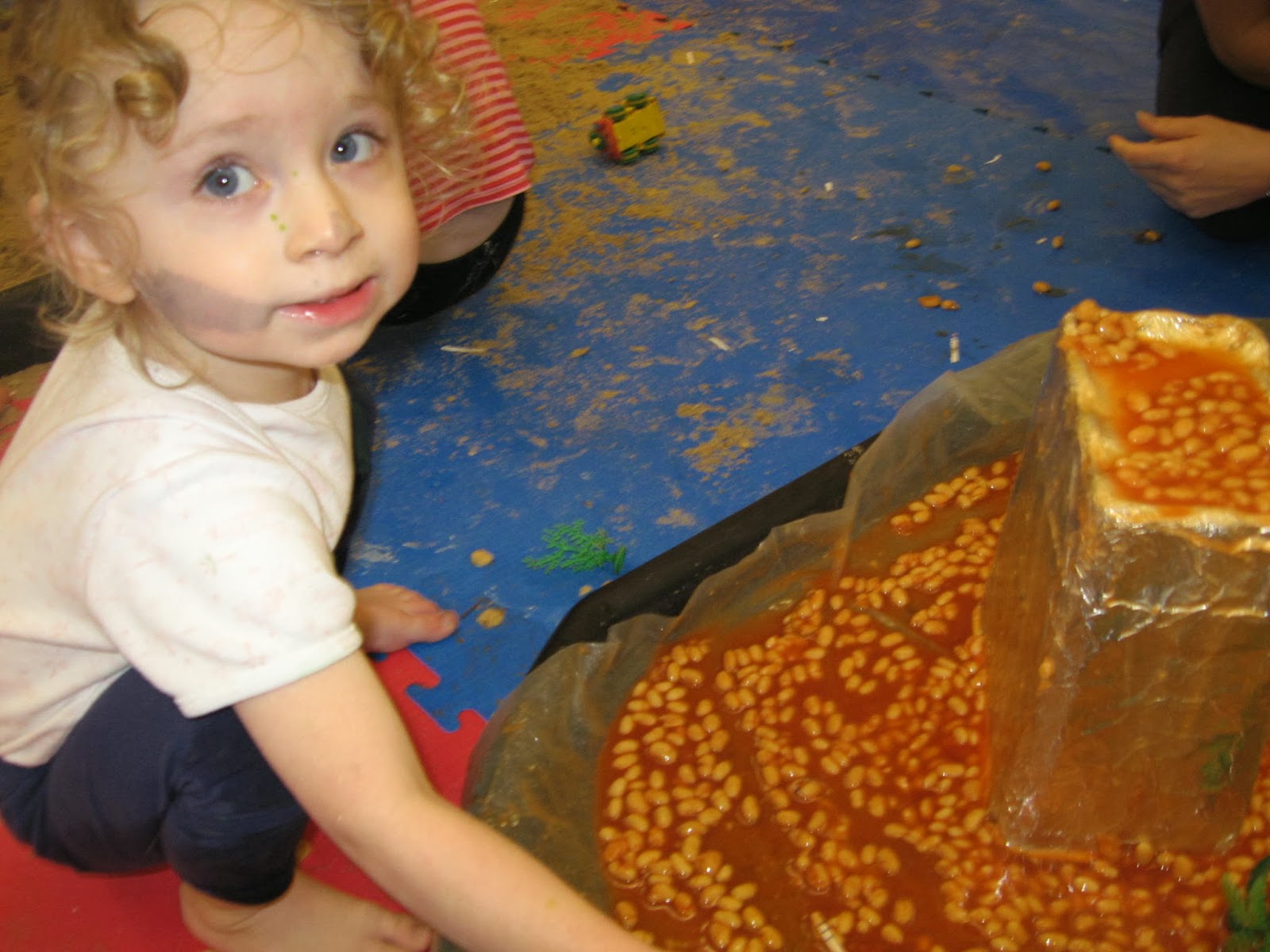 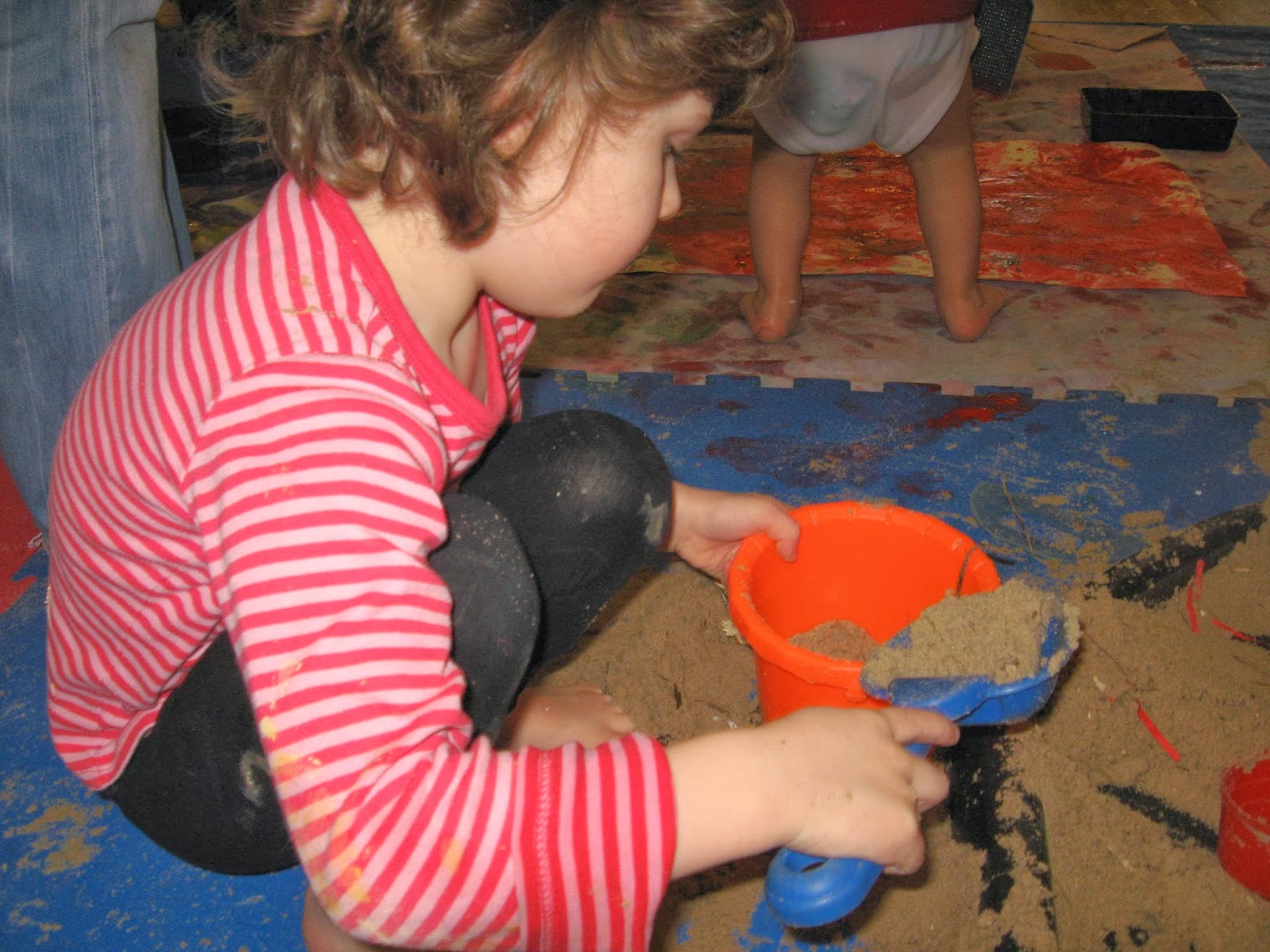 Little 2 played with the beans, scooping and piling them while Little 1 played in the sand, building a sandcastle.


There was some squishy play with the custard which a small boy managed to rub all over my leg and deposit in Little 2's hair!! Little 1 just dives right in and doesn't mind getting messy, she is quite cheeky and goes to wash her hands in the water play tubs! Little 2 is a bit more reserved with the sticky gooey stuff preferring to use utensils to explore it but she will dip her fingers in a little. 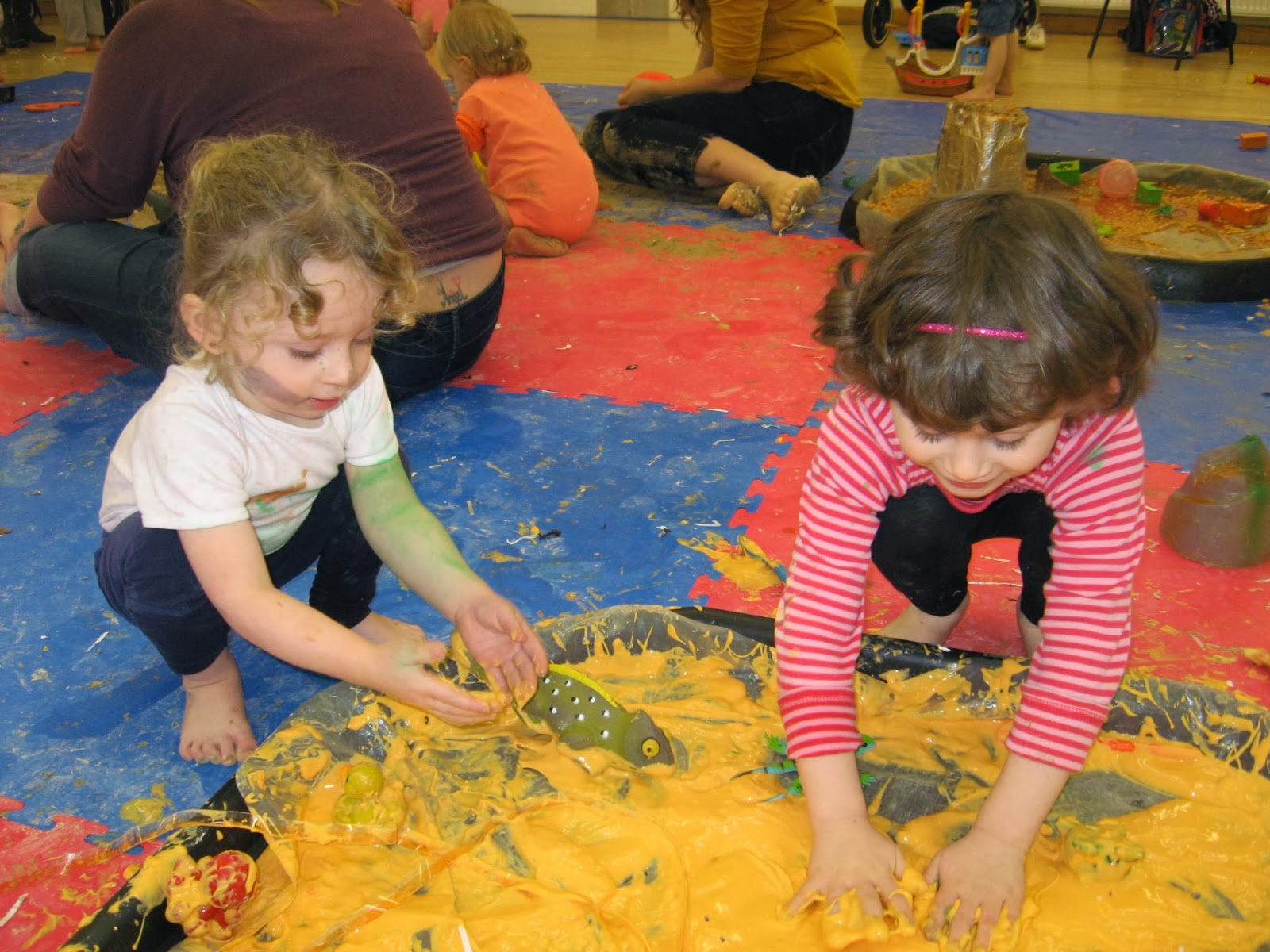 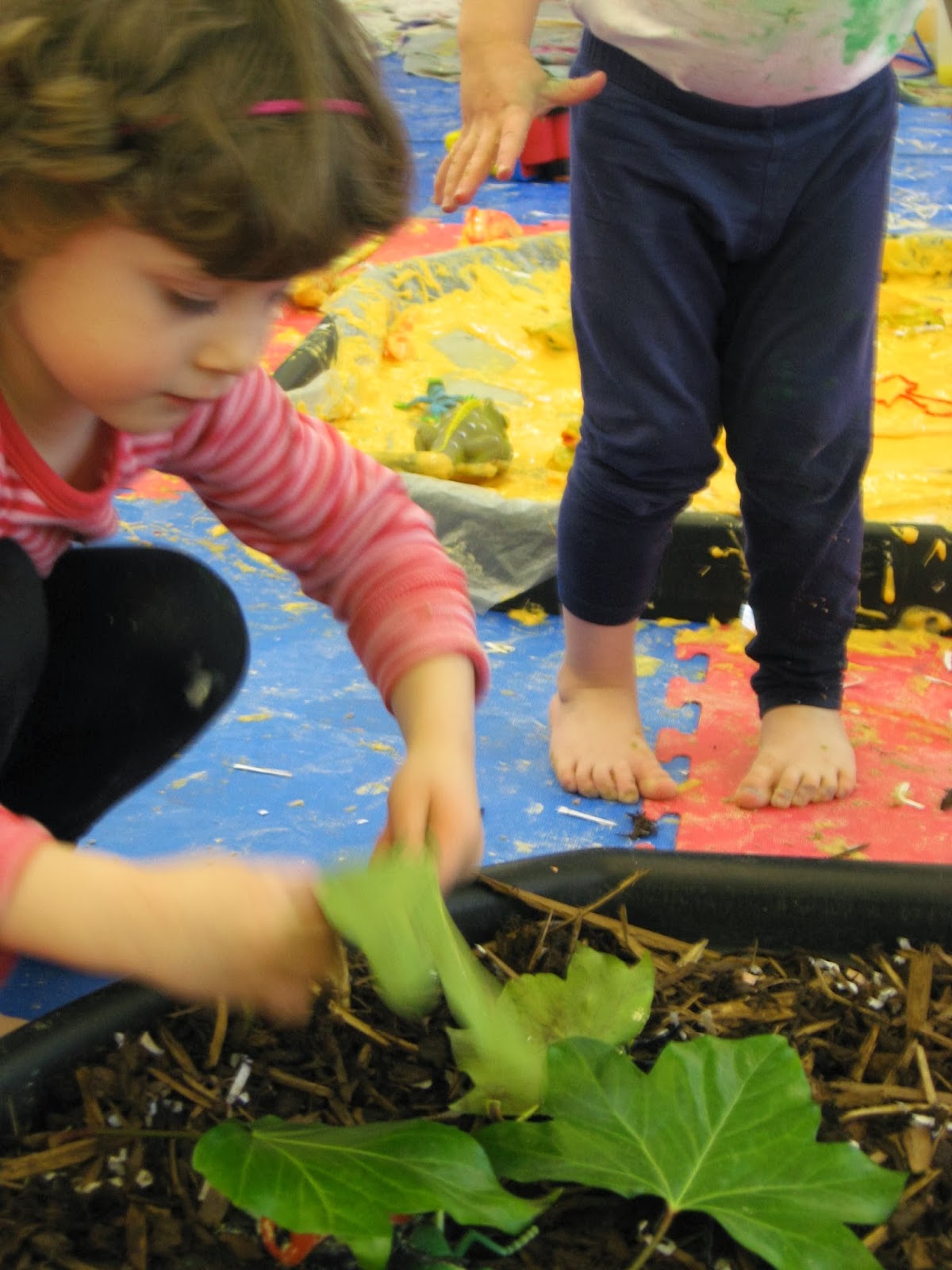 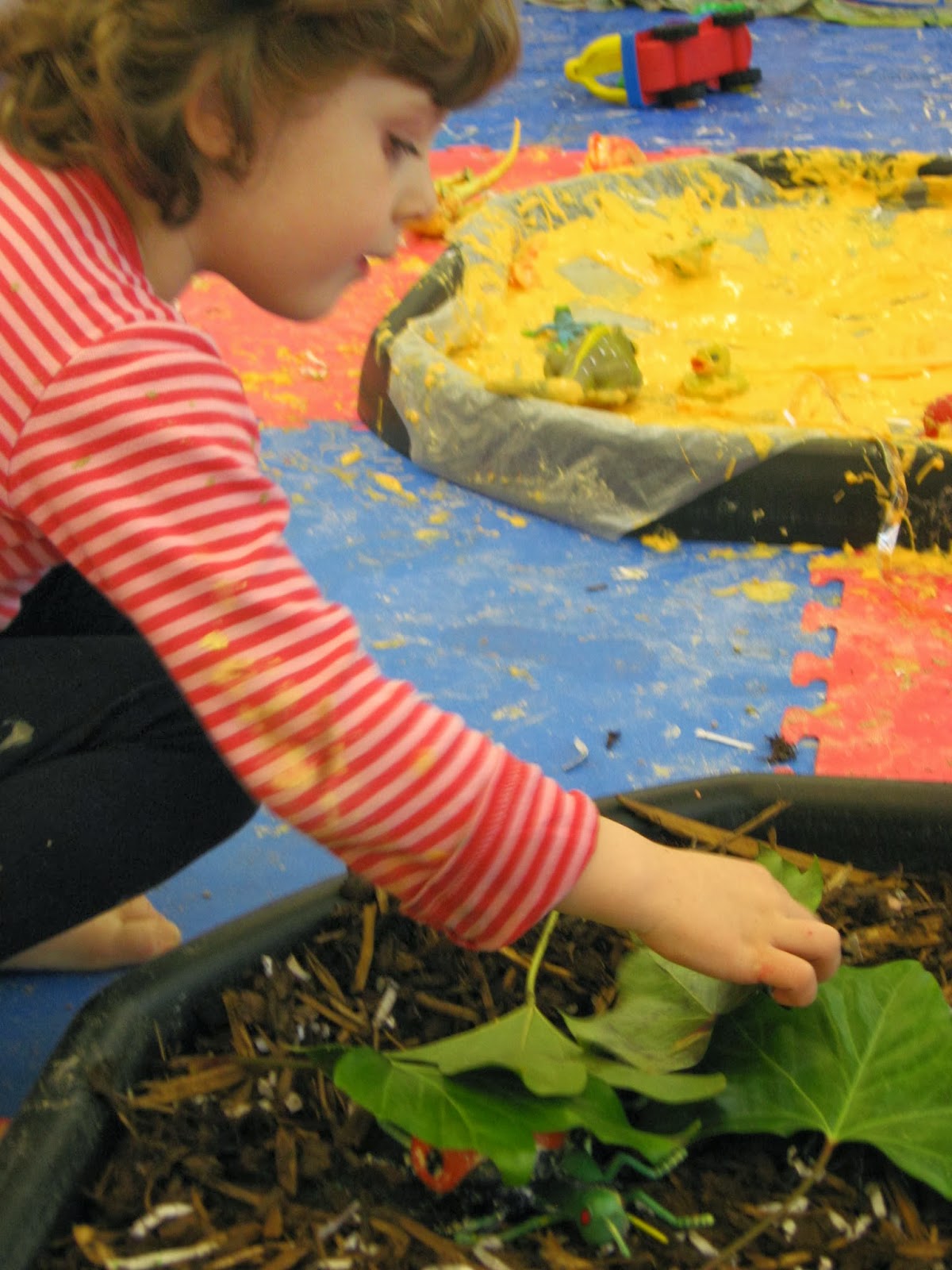 Little 1 didn't like the large plastic insects in the bark so she moved them into a small pile and covered them in the leaves so that she couldn't see them. She kept pulling faces and saying yuck, holding them by a leg or wing as if they really were real, she wouldn't touch the spider at all!!


Lastly the Little ones played in the shreddies, Little 1 was crushing as many as she could with her hands (she said it was so that Little 2 couldn't pick them up and eat them), Little 2 enjoyed stamping on them and then they played lovely together filling and tipping a little toy car with the crumbly mix. 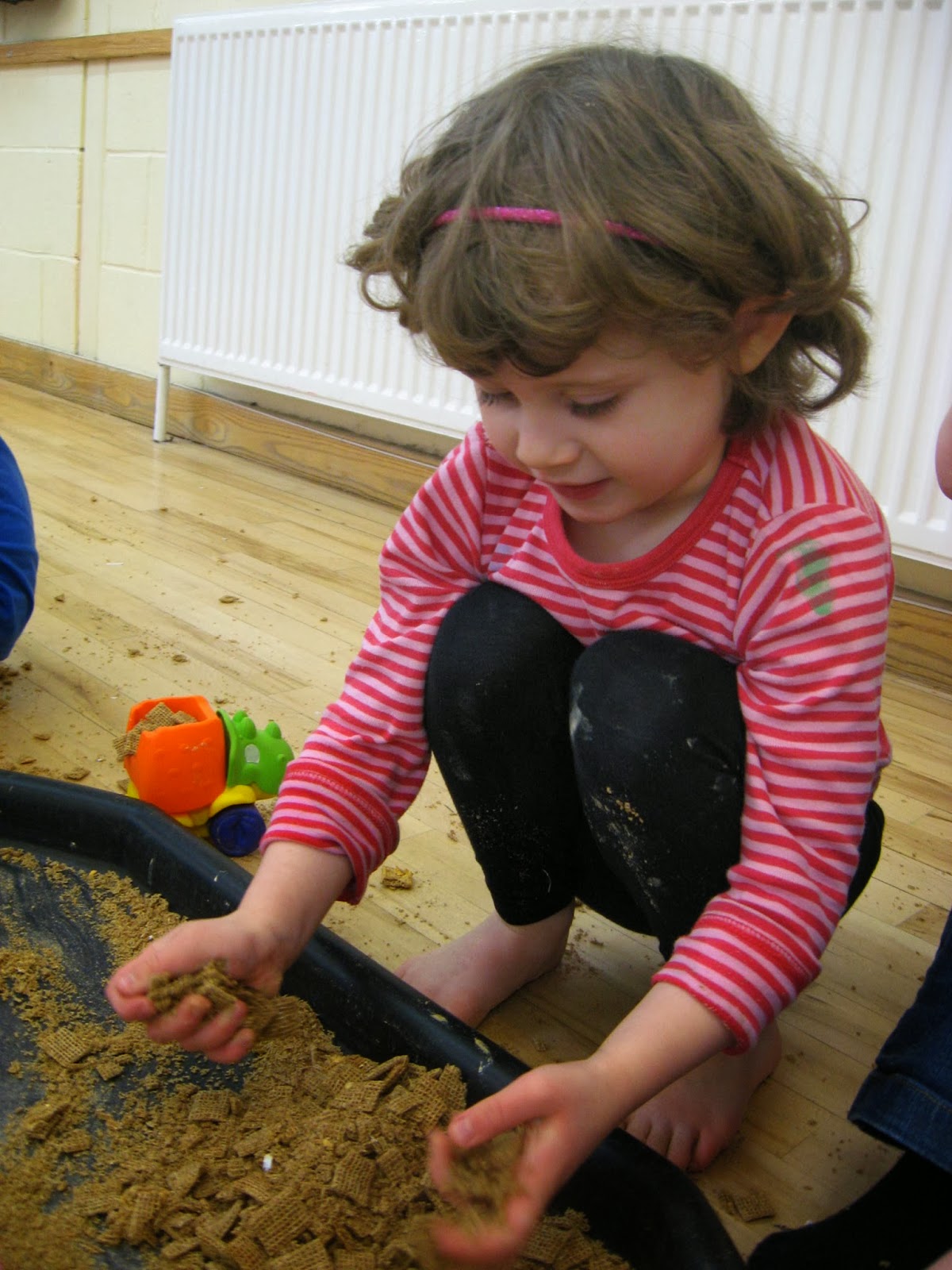 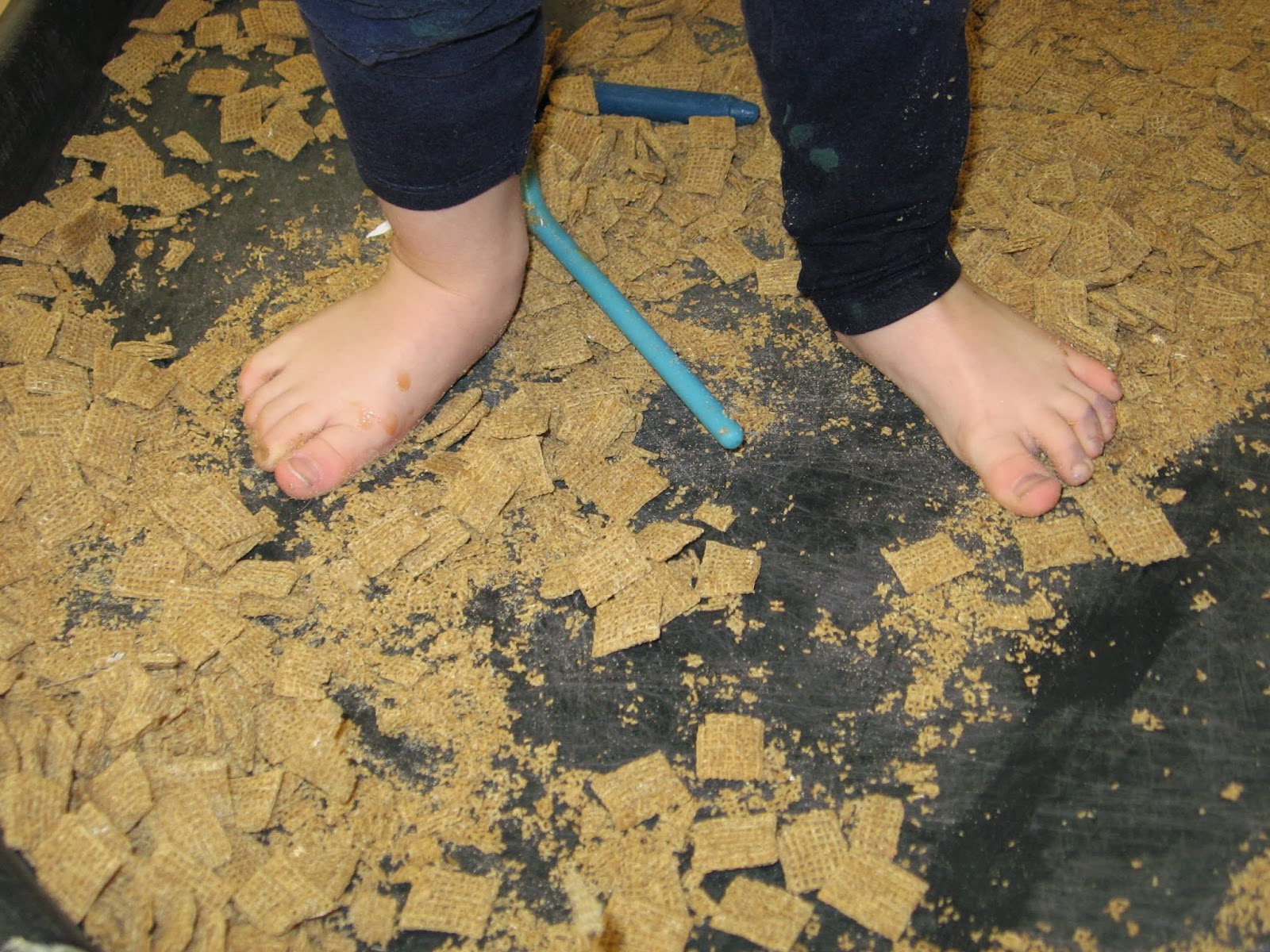 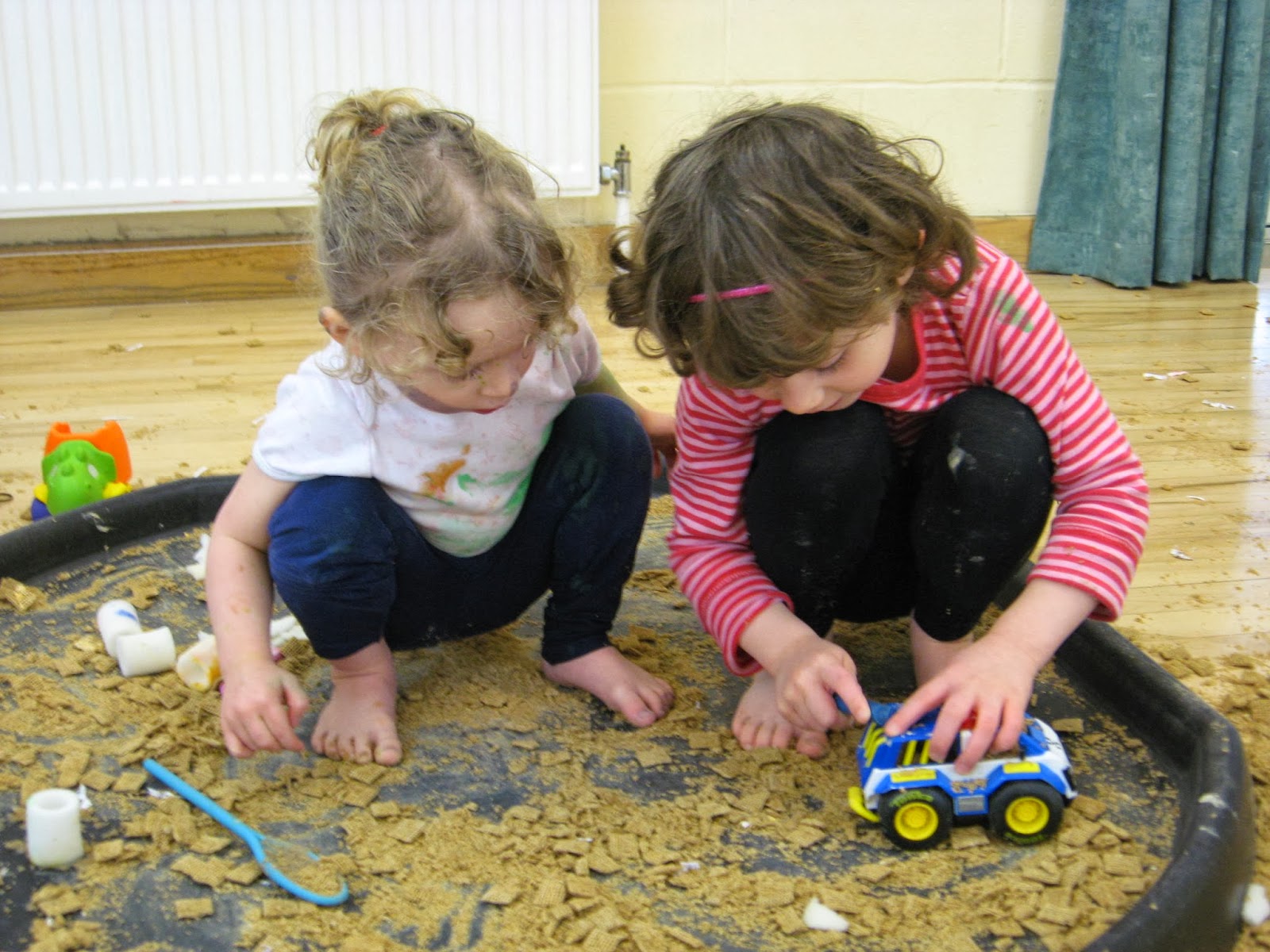 After all that it was time to wipe down and change my green, messy, soggy children to take them home and stick them in a nice hot bath. We love messy play and will be going again soon.
at 12:28 pm
Email ThisBlogThis!Share to TwitterShare to FacebookShare to Pinterest
Labels: getting crafty, little ones, messy play, out and about, playing